The Woman Who Brought Drinking Water, Toilets To A Lost Panchayat 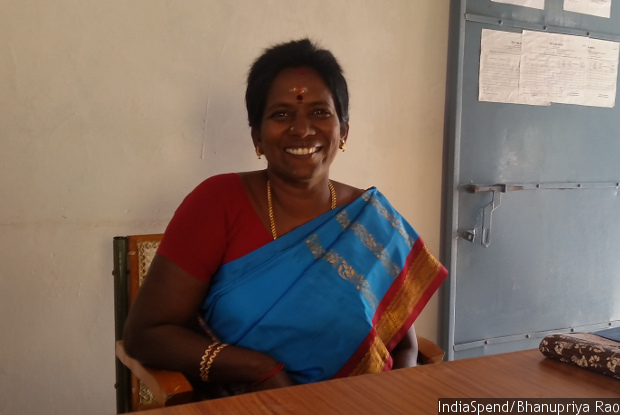 Five years ago, Melamarungoor, a panchayat in Sivagangai district, was starved of funds and official attention. Panchayat president Mazharkodi Dhanasekar built 650 toilets making the panchayat open defecation-free, brought water to villages that were dry and set up a reverse osmosis system worth Rs 300,000--all with funds that she had to lobby hard for.

Melamarungoor, Sivagangai district (Tamil Nadu): Mazharkodi Dhanasekar has a radiant smile and is keen to talk about her achievements, which, as it emerges, are considerable: Building 650 toilets and making her panchayat free of open-defecation in southern Tamil Nadu.

Dhanasekar’s fame has spread across the district as the woman who transformed and gained attention for a remote, lost panchayat--village council--largely ignored by officials until she was elected president in 2011.

Dhanasekar, 49, is one of 40 past and current women panchayat leaders we surveyed across six Tamil Nadu districts to analyse the impact of a quarter century of reservations for women in local bodies. We found a majority of women now work independently of the men in their lives and, despite a series of hurdles that denies them access to finances, such as male-dominated political networks and limited powers, they have carved out distinct identities for themselves and overtaken men in building roads, providing drinking water and toilets, as the first part of this series explained.

Overall, Tamil Nadu now has India’s lowest fertility rate–lower than Australia, Finland and Belgium–second best infant mortality and maternal mortality rate, and records among the lowest crime rates against women and children, as IndiaSpend reported in December 2016, but places like Melamarungoor are outliers.

“Block or district officials hardly ever came to visit our panchayat,” said Dhanasekar. “They don’t care about far-flung panchayats like ours. This meant they would not allocate extra funds for development. We just did not exist for them. Funds went to the panchayat closer to town (the block headquarters of Kalaiyarkovil).”

As you travel away from Kalaiyarkovil towards the neighbouring district of Ramanathapuram--close to which Melamarungoor is situated--the roads are pocked with potholes. On some stretches, only blobs of tar remain, the rest is mud. This is an arid part of Tamil Nadu, and villages struggle to find drinking water. Women and schoolgirls in uniform line up plastic pots near common drinking-water taps once in four days, which is when the water comes.

“I wanted to change that,” said Dhanasekar. “The only way, I realised, the district administration took notice of panchayats like ours was to completely transform it, show them what can be done. I managed to do that.”

When Dhanasekar assumed office six years ago, the balance sheet of her panchayat was a cause for concern. In 2005, eight villages from Ramanathapuram district were added to the 17 governed by the Melamarungoor panchayat.

However, State Finance Commission (SFC) grants meant for the eight Ramanathapuram villages were not reallocated to Melamarungoor. SFC grants, funds devolved by the state government, are the single biggest source of income for panchayats.

Dhanasekar’s first crusade was to get those SFC grants reallocated to Melamarungoor, which took a stream of petitions, weekly attendance at the district collectorate and more than six months of correspondence between the state department of rural development and the district administration.

She turned her attention next to the scarcity of drinking water.

Drinking water is a major problem across Sivagangai district. Villages in the district receive water mostly under the Combined Drinking Water Supply Scheme, popularly called ”Cauvery water”, from the contested river that flows south from Karnataka.

In rural areas, every habitation has one or more common drinking-water taps, which get water at fixed times. Of 3,352 rural habitations in Sivagangai, 397 habitations get some drinking water--10-39 lt per capita per day, against the 40 lt set by the National Rural Drinking Water Programme--and 2,955 get 40 lt, according to 2016 Tamil Nadu Water Supply and Drainage Board data.

In recent times, due to failing monsoons and mining in the Cauvery basin, villages now receive water once in four days, sometimes.

For villages bordering Ramanathapuram district, salinity is an additional problem because the Indian ocean is nearby. As this 2014 report shows, desalination plants either do not work or operate below capacity. The eight Ramanathapuram villages added to Melamarungoor were acutely short of potable drinking water. It took Dhanasekar five years to have pipes laid and drinking water brought to seven of those villages. One village, Sattanur, still does not have a water source.

“I had to petition the Kalaiyarkovil panchayat union president (the panchayat union is the second tier of local government, a group of all gram panchayats in the Block) to get Rs 300,000 sanctioned for a reverse osmosis (RO) plant in one of those eight villages, so that villages around can get better drinking water,” said Dhanasekar.

Before the RO plant started in 2015, people bought water at Rs 30 per pot. Now they pay Rs 5 per pot, so waste is discouraged. “Water in these parts in a valuable commodity and people should know its value,” said Dhanasekar. 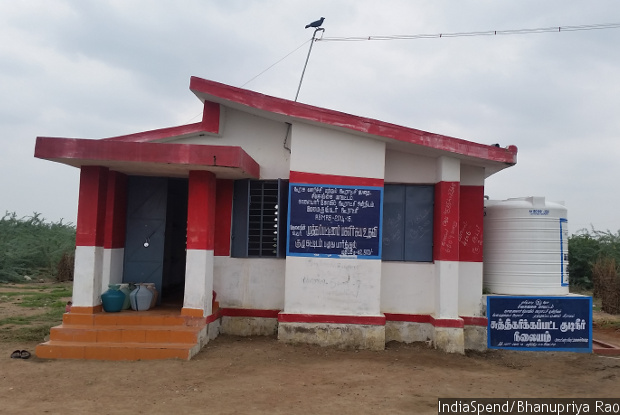 Before the reverse osmosis plant started in Melamarungoor, Sivagangai district, in 2015, people bought water at Rs 30 per pot. Now they pay Rs 5 per pot.

The shortage and value of money

Panchayats in Tamil Nadu are short of funds, as earlier parts of this series have pointed out. To get funds from other elected representatives, access to political networks is key--particularly difficult for women, most of whom are first-time politicians. Although panchayat leaders are not supposed to be affiliated to political parties, such affiliations are now common and, often, determine funding.

The Panchayat Union in Kalaiyarkovil Block is led by the All India Anna Dravida Munnetra Kazhagam (AIADMK). Since Dhanasekar’s family was allied with the AIADMK, it was not as difficult as it could have been.

“I could get some funds for another RO plant in my panchayat from the Panchayat Union,” Dhanasekar. “But if you have links to a rival party, say the DMK (Dravida Munnetra Kazhagam), getting funds is next to impossible.”

Dhanasekar’s biggest achievement, however, is not only that she built 650 toilets in her panchayat, but she did it cheaper than others, spending Rs 13,500 per toilet--of which Rs 12,000 is subsidised by the Centre’s Swachh Bharat Abhiyan (Clean India Mission), or SBM--by buying raw material in bulk and engaging labour from the adjacent Virudhunagar district for an entire year, not just to build these toilets, but other village construction activities such as the new Village Poverty Reduction Committee office. 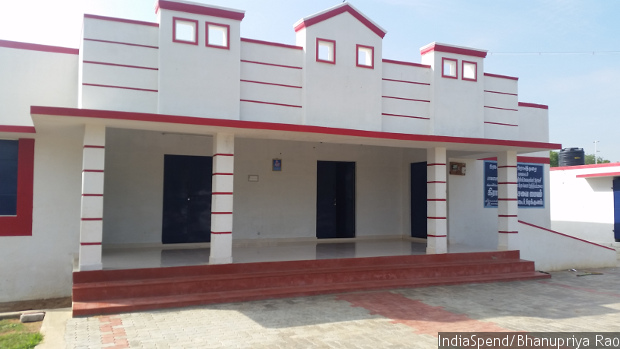 The Village Poverty Reduction Committee (VPRC) office in Melamarungoor, Sivagangai district. Woman panchayat president Mazharkodi Dhanasekar engaged labour for an entire year to build the 650 toilets under the Swachh Bharat Abhiyan and for other construction works such as the VPRC office, thereby reducing costs.

A household toilet costs between Rs 20,000 and Rs 40,000, according to this 2016 field survey of SBM by Accountability Initiative, a Delhi-based think tank. 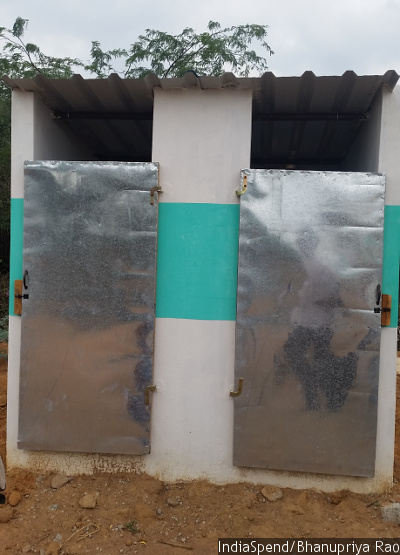 Still, Dhanasekar had to spend more than Rs 100,000 of her own money to manage the shortfall, which some villagers could not pay. The money will not be reimbursed.

Dhanasekar is a Maravar, a subcaste of the dominant Thevar community, and her family owns 15 acres of land in Melamarungoor, so she can absorb the loss. Although agriculture over the last five years has failed because of scanty rain, her family’s finance and money-lending business sustains them well.

Dhanasekar is willing to spend her own money because of her determination to put Melamarungoor on the district map of Sivagangai as a model panchayat. But many panchayat presidents, especially those women of limited means, cannot do the same.

Dhanasekar is aware of her unique position.

“Being in public office, I realised the amount of good I can do with power in my hands, even though it is limited power,” she said. “Now that I have achieved my aim of making Melamarungoor well-known, my next step is to organise women (panchayat) presidents into a federation and encourage more of them to contest elections. We need more women, fearless women.”

Series concluded. You can read the first, second and third part here, here and here.