The Race To Build In Africa 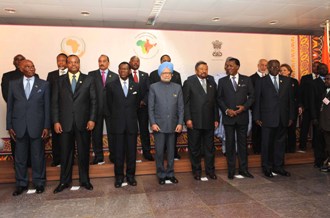 Much has been said about China pouring billions of dollars into Africa. IndiaSpend’s Prachi Salve looks at India’s Government and private sector investments into Africa, and particularly countries with which it has donor relationships.

India’s exports have grown from $436 million to $18 billion. The main items of import from Africa include petroleum, gold and inorganic chemicals products which reflect India’s need of energy resources.

India is seeking to diversify its dependence on middle-eastern oil imports (which account for nearly 75%) and hence has increased its engagement in African oil producing countries such as Nigeria, Sudan, south Sudan, Côte d’Ivoire, Equatorial Guinea, Ghana and Angola. India also imports nearly 20% of its minerals from Africa. Indian exports on the other hand increased from $436.8 million in 1990 to $13.2 billion in 2009.

Many Indian companies have begun to invest in Africain fields of oil exploration, mining projects, manufacturing and services as well. Indian investment flows to Africa increased from $243 million in 2000 to $2.4 billion in 2008.

The major investments are in the area of mining and oil exploration. ONGC has acquired shares in oil exploration ventures in Libya and Nigeria, which account for 15 percent of India’s oil imports. Vedanta Resources invested about $750 million in a Zambian copper mine project.

Indian medical companies like CIPLA have invested nearly $32 million in Uganda as a joint venture with another local manufacturer Quality Chemicals Industries Ltd., in order to produce anti-retroviral and anti-malarial drugs. The diagram below showsIndia’s involvement in Africa. The aid which India is offering especially in capacity building operations around the continent is closely associated with the investments of Indian firm.

$5.7bn In Credit Given To Africa

The 2nd India-Africa summit was held on 25th May 2011. The summit saw India unveiling $5.7 billion in credit and grants for developmental projects and over a 100 capacity building institutions in Africa. Furthermore, the EXIM Bank provides lines of credit (LOCs) to many African countries.India has extended nearly $500 million dollars to a group of 8 West African countries.

The Indian government has been co-operating with African governments in areas like agriculture, SME sector, science and technology, information technology, etc which includes the Pan-African e-network Projects, tele-education and tele-medicine components.

India increased the number of scholarships to African students to approximately 22,000 in the coming 3 years and also plans on developing institutional linkages between the two countries. Incidentally, India’s Technical Co-operation Programme donated nearly 124 crore to the continent.

Now, let’s look at the China angle. Egypt was the first country to receive aid from China in 1956. It’s not easy to get estimates of China’s development aid to Africa as these figures are not available. Experts like Deborah Brautigham have estimated China’s external aid to Africa in 2009 to be $1 billion. China’s aid comprises of grants extended for social projects (health, education and housing) in the form of material assistance, technical assistance and personnel training; interest-free loans given notably for infrastructure projects; concessional loans provided by China EXIM Bank; and debt relief.

Chinese firms on the other hand are investing heavily in developing manufacturing capacities in Africa whileIndiaseems to be keen on developing financial services. This difference can be attributed to the fact that both countries are trying to develop sectors in which both have a competitive edge.

Not surprisingly, there is an almost similar interest in construction. Both countries have invested an almost similar percentage of their total investments in Africa. One reason for construction could be the fact that both India and China provide substantial aid for infrastructure projects. 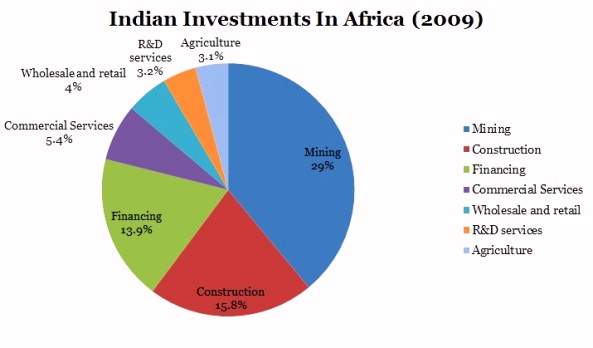 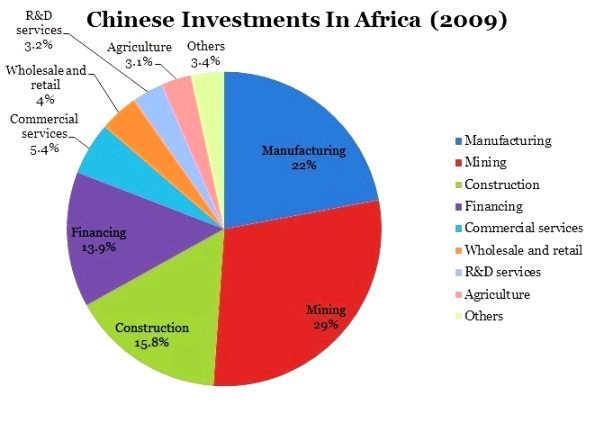 Both India and China view the region not just as a resource pool but also as a potential market for its finished goods and services. India is looking to Africa to fulfill its growing resource needs.

It is evident from the fact that Indian firms other than in mining are investing inAfrica. The government engagement in Africa is almost working in tandem with the private sector engagement by creating opportunities for them through aid flows. It may not be as efficiently co-ordinated as the Chinese approach but it’s happening nevertheless.