The North-South Fertility And Finance Battle: Will South India Lose Out?

Mumbai: As leaders of south Indian states raise concerns over the terms of reference for the 15th Finance Commission alleging that they would be at a disadvantage, south Indian states have reduced their fertility rates below replacement level, while the rate for states such as Bihar and Uttar Pradesh remains above the level, according to an IndiaSpend analysis of government data.

The replacement rate of fertility is 2.1, the level at which a population exactly replaces itself from one generation to the next.

In 2016, Tamil Nadu’s total fertility rate (TFR)--the number of children a woman will have in a lifetime--was the lowest among India’s large states at 1.6, and other south Indian states--Andhra Pradesh and Telangana (1.7), Kerala and Karnataka (1.8)--also have rates below the replacement level of fertility, according to the latest Sample Registration System data, under Office of the Registrar General & Census Commissioner, India. The national average TFR was 2.3.

The Terms of Reference (ToR) proposed to the 15th Finance Commission--which lays out the roadmap for revenue sharing between the Centre and states, and among states--suggest to take into account the 2011 census, instead of the 1971 census which was used earlier.

The ToR for 15th Finance Commission do not mention the allocation of weights to various parameters.

The central government has proposed that the 15th Finance Commission incentivise states who have taken efforts to control population growth, Prime Minister Narendra Modi said in Chennai on April 12, 2018.

“A state like Tamil Nadu, which has devoted a lot of effort, energy and resources towards population control would certainly benefit,” Modi said, in response to allegations made by southern states over discrimination in central funding, and biases towards certain states.

The Union Government has suggested to the Finance Commission to consider incentivizing States who have worked on population control. Thus, a state like Tamil Nadu, which has devoted a lot of effort, energy and resources towards population control would certainly benefit: PM

Bihar’s TFR in 1981 was 5.7, which declined to 3.3 to 2016. In comparison, Tamil Nadu’s TFR declined by more than half from 3.4 in 1981 to 1.6 over the same period, indicating that the state was successful in implementing population control measures.

States in the north--Uttar Pradesh (3.1), Madhya Pradesh (2.8) and Rajasthan (2.7)--had higher TFR, all above the replacement level of fertility.

The southern states allege that the new Finance Commission terms will benefit states in the north having larger populations, despite the former performing better on governance/development parameters such as population control over the years.

“Southern states could potentially lose up to Rs 8,000 crore, if the ToR were implemented,” Thomas Isaac, Kerala’s finance minister said, the News Minute reported on April 24, 2018.

However, states such as Maharashtra in the west and West Bengal in the east also have low TFRs--1.8 and 1.6 (same as Tamil Nadu), respectively.

If the 14th Finance Commission had used the revised terms, Rs 1.25 lakh crore would have been redistributed, according to this March 10, 2018, article by V Bhaskar, former special chief secretary finance to the government of Andhra Pradesh, and former joint secretary Thirteenth Finance Commission, in the Economic & Political Weekly.

Bhaskar calculated potential gains and losses to states based on the 2011 census using the share allocated under 14th Finance Commission.

“All the five southern states would have been the biggest losers, along with West Bengal, Odisha, Assam and Punjab,” Bhaskar wrote in his article titled Challenges before the Fifteenth Finance Commission. 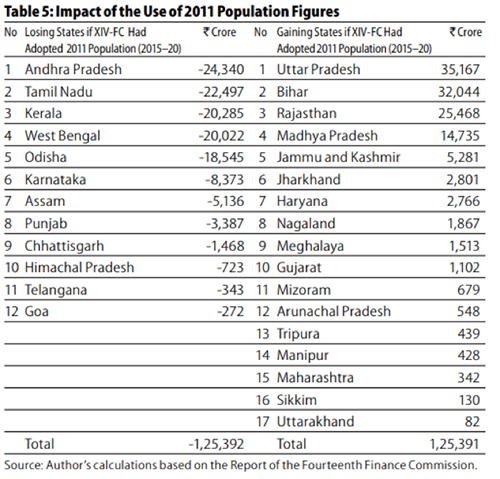 “The heartland states have less lucrative tax bases, and are more dependent on central funds,” TN Ninan, chairman, Business Standard Private Limited, wrote in a column in Business Standard on March 30, 2018. “Devolution from the Centre accounts for a half or more of their total revenue; in Bihar’s case, it is three-quarters. Whereas the southern states are dependent on the Centre for only a third of their total revenue.”

“The imbalance persists even after devolution, as seen in expenditure per head,” Ninan argued. “Without more resources, how do the poorer states improve their people’s health and education indices, so as to achieve better population control?”

Southern states that have been able to limit population growth perform better in terms of per capita income compared to states in the north.

The TFR for women between 15-49 years is lower at 1.71 for women with more than 12 years of education compared with 3.06 to women with no education and 2.2 for all women.

Between 1971-2011, the population growth of north Indian states has been higher compared to states in the south.

Population control not the only factor for incentives

The population is not the only parameter for providing incentive to states. The states will also be judged on other development indicators such as the implementation of goods and services tax, flagship schemes, sustainable development goals and promoting ease of doing business. 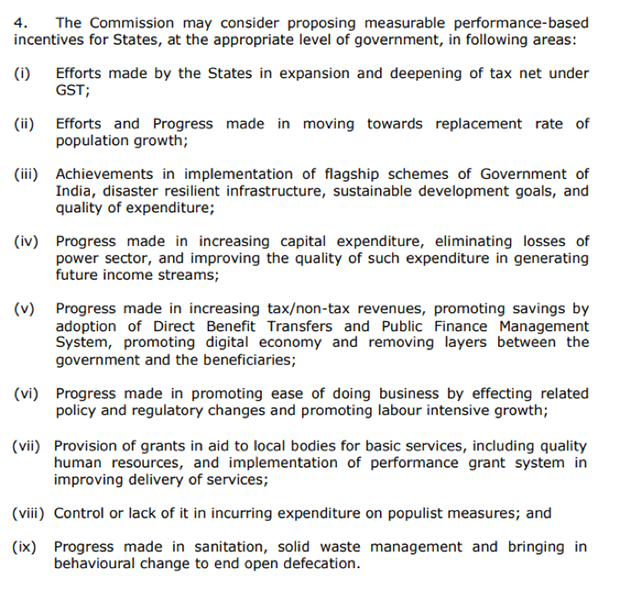 "Every Finance Commission creates its winners and losers,” Ninan wrote. “Between the 11th and 14th commissions, three of the southern states (the exception being the combined Andhra Pradesh) were significant losers in terms of share of central taxes. But northern and eastern states were also losers: UP, Bihar (including Jharkhand), West Bengal and Odisha.”

“The gainers included the western giants Maharashtra and Gujarat,” Ninan argued. “So one should not jump to facile north-south conclusions — especially since the commission has also been asked to reward fiscal performance and population control."