The Man Of The House, Is A Woman 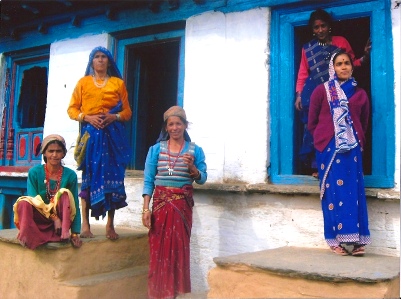 Mohan Bhagwat, head of Hindu right wing group Rashtriya Swayamsevak Sangh or RSS kicked up a furore recently when he referred to marriage as a contract between spouses wherein it was the woman’s duty to look after the house and keep the man happy. In return, the man would provide for her needs. 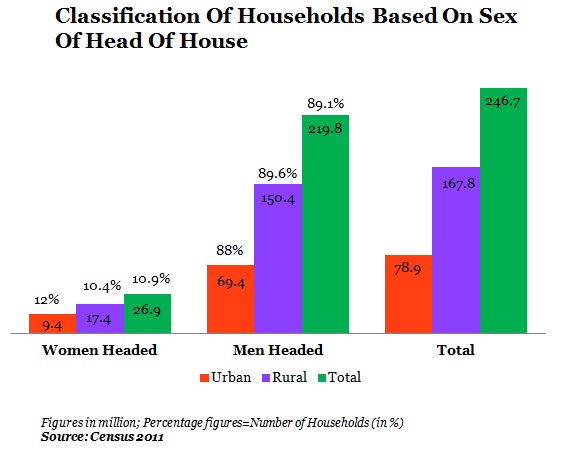 A significant number of women headed households are in states like Uttar Pradesh that are not known for being progressive on welfare or status of women. Andhra Pradesh has the highest number of such households. However, the proportion of such households to the total households is small in some large states despite their numbers, as may be seen from the table below. 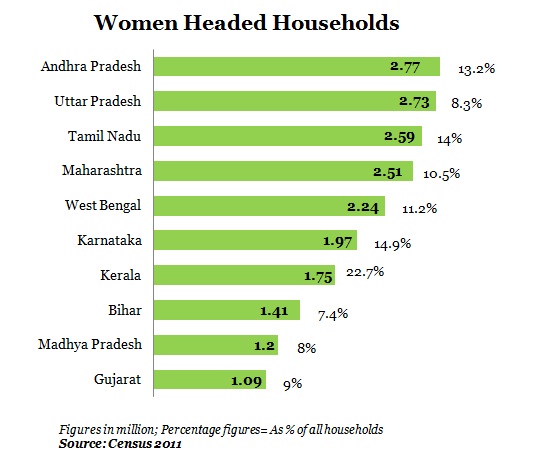 The high proportion of women headed households to all households in Kerala is easily explained by migration of men to West Asia and other parts of the country in search of work. Hilly states - Himachal Pradesh (18.3%) and Uttarakhand (17.1%) - where economic development was slow also have high proportion of households headed by women. Suicides by farmers in states such as Andhra Pradesh and Maharashtra owing to crop failure may partly explain the large numbers of women headed households in these states.

Most of these women do not become head of their household or live alone because they choose to. Rather, they may have been forced by circumstances. A paper by Mayra Buvinic & Nadia H Youssef titled “Women Headed Households: The Ignored Factor in Development Planning” for International Center for Research on Women in 1978, attributes emergence of women headed households to widowhood, divorce, separation and desertion; migration of male members for long periods; loss of economic function by resident males due to severe unemployment, disability, illness and male reluctance to accept jobs seen as status reducing.

Lakshmi Lingam writing in The Economic and Political Review in 1994 (Women-Headed Households : Coping with Caste, Class and Gender Hierarchies) suggests that factors such as grown up sons living in independent nuclear units also contribute to the emergence of women headed households.

While 60% of the women headed households have 2-5 members, Census 2011 also found that more women than men live alone in this country – a total of 4.92 million women (including 3.69 million in rural areas) are single member households compared to 4.18 million for men.

Overall, about 18.3% of the women headed households consist of women living alone. That proportion is higher at 21.1% in rural areas compared to 12.8% in urban areas. Chhattisgarh, Madhya Pradesh, Tamil Nadu and Andhra Pradesh are among states with high proportion of single member woman households. 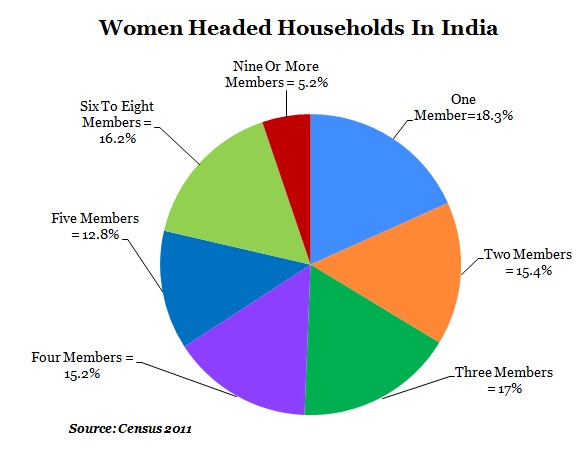 And living alone is not safe. Some states with large numbers of women-headed households, including single member households, are notorious for crimes against women. For instance, National Crime Records Bureau data for 2011 show 28,246 cases of crime against women from Andhra Pradesh. West Bengal reported 29,133 cases and Uttar Pradesh, 22,639 cases and Madhya Pradesh, 16,599 cases.

Given the rising trend in women headed households, policies perhaps need greater focus here. Transferring cash to women under direct benefits transfer will definitely help empower women and improve the lot of these households. But they also need to find enough work that pays adequately, whether through employment guarantee programmes or otherwise. They also need help to acquire new skills.