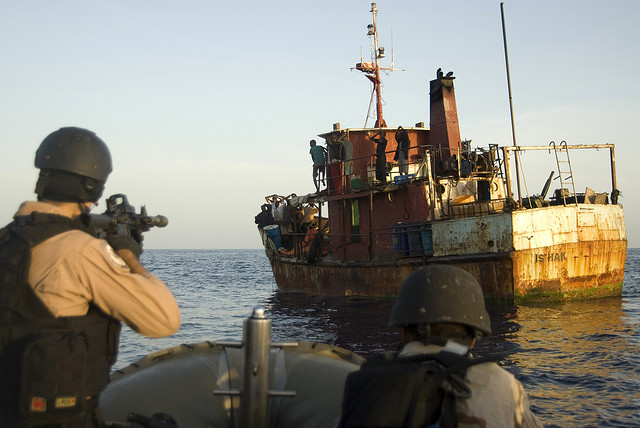 “(The) Indian legal system lacks (a) clear and unambiguous mechanism to prosecute maritime pirates.. Piracy off the coast of Somalia has been a threat to international shipping and trade.”

This was Ranjit Sinha, chief of Central Bureau of Investigation (CBI), the premier investigation agency of India, speaking recently at the inauguration of a workshop on maritime piracy in Germany.

The 21st century is known as the Asian century, and the Indian Ocean has risen to prominence globally for its strategic location and importance to maritime trade. The Indian Ocean stretches from the east coast of Africa to the archipelago of Indonesia and Australia in the East; it extends in the north up to the Persian Gulf, with its southern borders stretching to the waters of Antarctica.

The Indian Ocean today carries half the world’s container ships, a third of its cargo and two-thirds of the world’s oil tankers. The region is rich in marine and energy resources as well as mineral wealth. The Indian Ocean houses 38 littoral (with maritime or sea borders with the Indian Ocean) states, in addition to many small and large islands.

There are seven choke points identified on the sea lanes of communications (SLOCs) in the Indian Ocean Region (IOR), strategically important in terms of maritime security. The choke points in are Bab el Mandeb, Mozambique Channel, Suez Canal, Strait of Hormuz, Strait of Malacca, Sunda Strait and Lombok Strait.

According to this 2013 World Bank report, maritime piracy by Somalian pirates costs $18 billion a year. Over the years, piracy has evolved; the weapons pirates use are becoming more dangerous; more people die and robbery, hijacking for ransom, criminal violence and hostage-taking has increased. A total of 264 piracies were reported globally in 2013, according to the International Maritime Bureau, of which 189 incidents took place in the IOR. There has, however, been a sharp decline in piracies worldwid,e from 445 cases in 2010 to 264 in 2013.

Let us take a look at the piracy locations in IOR.

The most vulnerable regions in the IOR are along the Horn of Africa, off the Somalia coast, Gulf of Aden and near Indonesia in South East Asia. There has been a decline in incidents along the east coast of Africa, especially in the Gulf of Aden, with 117 cases in 2009 falling to just six in 2013; and in Somalia, from 80 in 2009 to seven in 2013. The reason for the decline could be increased and active military action against suspected skiffs (fast, small boats used by pirates), anti-piracy operations and more armed guards on ships.

On the other hand, there piracies have increased near Indonesia, rising from 15 in 2009 to 106 in 2013. Incidents near the subcontinent also appear to be growing, especially along the Indian coasts, from five cases reported in 2010 to 14 in 2013. The attacks near the Indian coast include incidents at ports and anchorages, the major ones, petty thefts by armed robbers.

Singapore is the most affected country due to maritime piracy in the IOR with 39 ships attacked in 2013, followed by Hong Kong and Malaysia with 20 and 10, respectively.

In 2013, 12 vessels were hijacked, 202 boarded, 22 fired upon and 28 attempted attacks were globally reported. This was an 11% decline from 2012 and 41% drop from 2011. The major ships attacked are chemical tankers, oil tankers and bulk carriers, which clearly shows serious threat and security concerns for global trade and commerce. 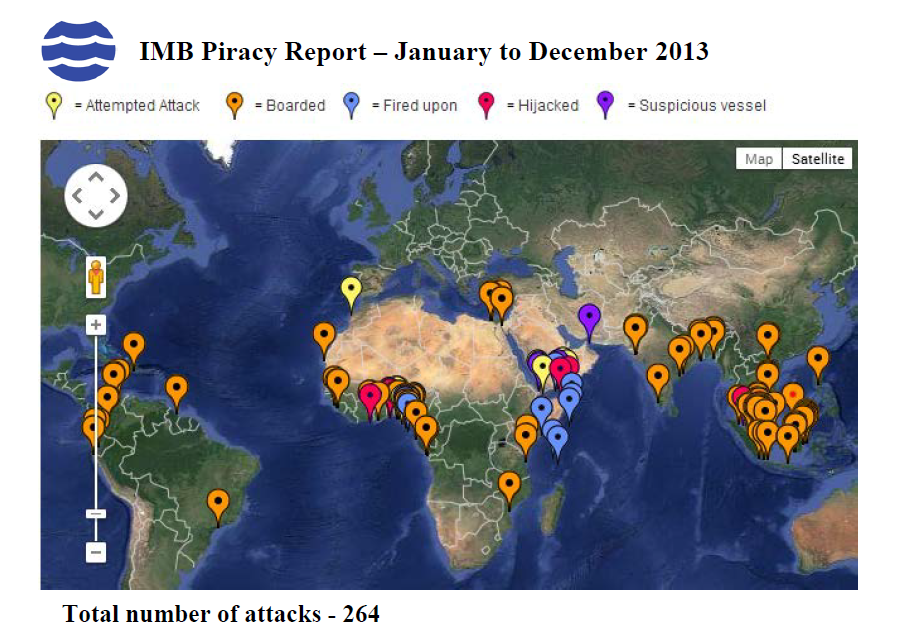 The regions that are targeted by pirates come under the exclusive economic zones of littoral states, which make it more vulnerable for maritime commerce. The reason, as Sinha pointed out, could be that pirates began to shift their operations eastwards and southwards because of the Indian naval presence in the Gulf of Aden. “This led to some pirates operating closer to the Indian Exclusive Economic Zone and the western coast of India. From December 2010, the Indian navy and coast guard have conducted several major anti-piracy operations off India's western coast and apprehended around 120 suspected pirates," Sinha said. 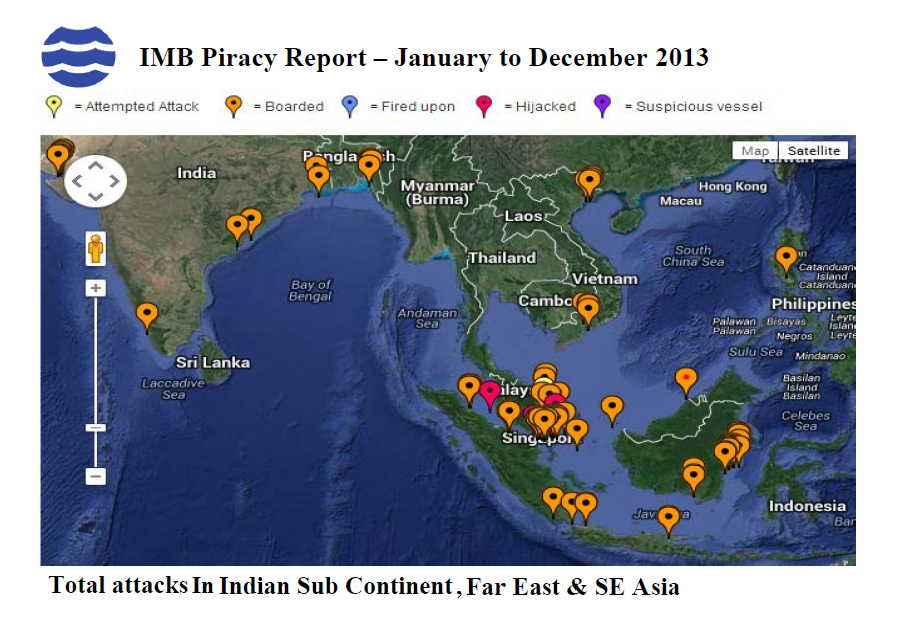 In all, 304 crew members were taken hostage between January and December 2013, of which 54 were from Malaysia and 34 from Indonesia. Between 2010 and 2013, 38 Indian hostages were taken by Somali pirates.

MV Sirius Star, a crude oil tanker carrying oil worth $ 100 million, was hijacked by Somali pirates in 2009. It was later released after paying ransom of $3 million, and is said to be one of the biggest catch by pirates till date.

To counter such threats, various efforts and initiatives like ‘Regional Cooperation on Combating Piracy And Armed Robbery Against Ships in Asia’ (ReCAAP) and ‘Indian Ocean Naval Symposium’ (IONS) have been started by countries, alongwith naval exercises like MALSINDO (Malaysia-Singapore-Indonesia), a trilateral coordinated naval patrol along the Malacca. This is a year-round operation designed to protect trade and promote anti-piracy operations. Similarly, the Indian navy also plays a major role in ensuring safe passage of commercial ships through the region, escorting Indian flagged ships, as well as merchant ships from other countries.