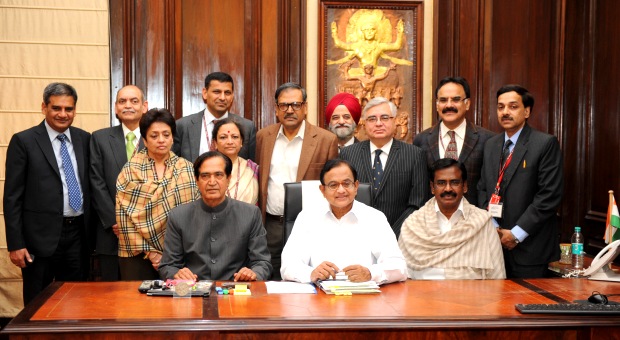 “The purpose of a Budget exercise – and the job of a Finance Minister – is to create the 'economic space’ and find the resources to achieve various socio-economic objectives. Right now, the economic space is constrained because of a high fiscal deficit, reliance on foreign inflows to finance the current account deficit, lower savings and lower investment, a tight monetary policy to contain inflation and strong external headwinds.”

In his Budget speech on February 28, 2013 Finance Minister P Chidambaram gave this broad overview of challenges faced by the country. While expectations from the Indian economy in 2013-14 have been fairly muted, the Union Budget 2013-14 has a surprisingly optimistic forecast on the tax collections front even as it has significantly watered down its estimates for total collection.

The Government expects gross tax revenue to grow around 15% in comparison with the Budget Estimates (BE) for the previous year where BE, as the name suggests, is the forecast for various government-related numbers set out in every annual budget. This growth expectation is only a tad lower than the 15.6% growth expected during the previous year. Also, given the lower-than-expected actuals for the year 2012-13 so far, the forecast figure is actually a 19% growth.

On the face of it, this is somewhat surprising since the budget had no major measures to improve tax collections. The increased tax surcharge for 2013-14 on India’s super-rich and the voluntary compliance encouragement scheme to rake in more service tax receiptswere two noteworthy macro-measures but are unlikely to move the needle in overall tax collections.

So, here’s the million dollar question: In a year when growth is expected to slow down and no major moves have been made to increase tax collections, can the government pull off these forecasts?

Since track record – for Government or private enterprise - is a critical input, let’s take a look at the Government’s hit rate at predicting its total receipts, gross tax revenue (which accounts for around 70% of its receipts) and the major tax components like income tax, corporation tax, customs duties, excise duties and service tax.

Importantly, we take a longish period, the decade beginning 2003-04 and up to 2012-13, which covers periods of both upturn and downturn, and hence is not biased by one particular stage in the business cycle. Then, let’s see what collections for 2013-14 could be like.

Actual receipts surprise on the upside

If you look at receipts from 2003-04 up to 2012-13, on an average, the Budget actually underestimates the total receipts! Over the past 10 years studied, actual collections have been higher than estimates, on an average, by a little over 3%. In fact, actuals are higher than budget estimates in 7 of the 10 years under consideration, exceeding between a range of an almost non-existent 0.1% to a double-digit 13%.

In other words, if past trends hold, it is more likely than not that the government’s receipts will actually exceed its forecast figure of Rs. 16,65,298 crore as set out in the BE for 2013-14. Moreover, even if there is a downside, it could be more muted than the upside. The actuals have been less than estimates by a maximum of 5% over the past 10 years while they have pleasantly surprised to a much greater degree (see Figure 1).

Nevertheless, as per the revised estimates in 2012-13, total receipts were around 4% less than forecast. While this is potentially subject to change, it does remain a cause of concern since we are looking at another year of muted economic growth. 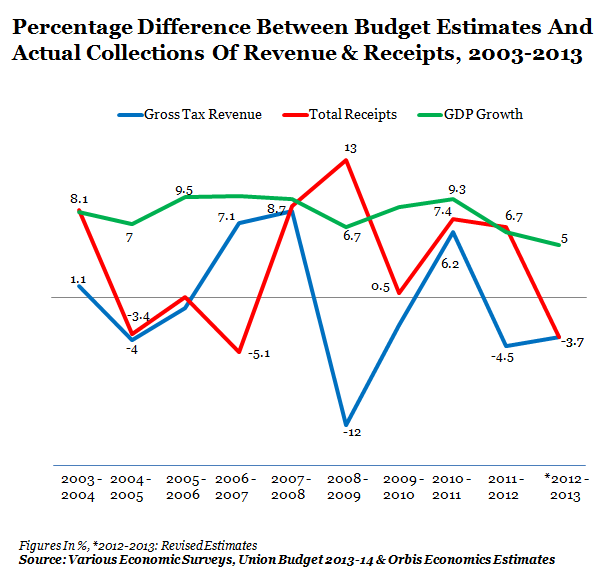 While the government seems to underestimate the overall receipts picture, it actually is spot-on if you look at an average trend for the past decade for its biggest receipts– tax collections. Over the past decade, actual tax collections have been as little as 0.5% less than estimated. Though the overall picture doesn’t mean very much when the large annual variations are considered.

While no clear link to overall economic performance can explain why the tax collections are overestimated or underestimated, one year – 2008-09 - stands out clearly when growth dipped sharply. After growing at over 9% rates in the previous fiscal years, it slipped to 6.7% during the year. It is during this year, in fact, that tax collections were overestimated in the budget the most; in contrast with the previous two years when they were actually underestimated the most as well at the height of the boom period (see Figure 2). 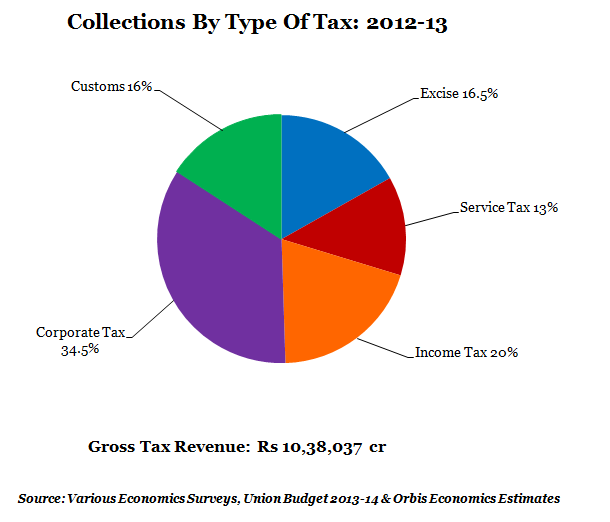 On an average, excise duties have been overestimated by over 7%while service tax has been underestimated by 5.7%. This is likely on account of the rapid growth in service tax collections over the past few years as more services have been brought under the tax net. Also, services has grown faster than average in the past decade, and it has also been one of the more resilient sectors even during the downturn.

On the other hand, the share of traditional indirect taxes like customs and excise has been on the decline in the past years in overall tax collections. It will be interesting to see how well service tax figures have been forecast for 2013-14, a year when there is a special scheme to encourage back-dated payments. 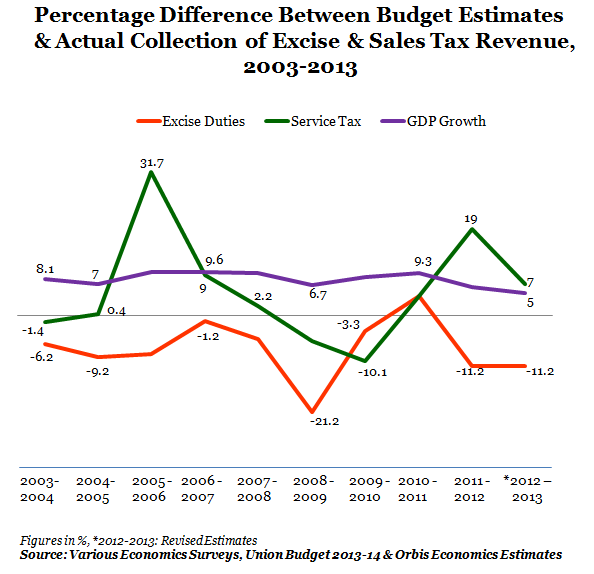 Verdict – They might just pull it offbut risks remain

Building from past trends, what outcomes can we expect for both receipts and gross tax revenue in 2013-14? Taking into account the maximum variations between budget estimates and actuals over the past years, it is possible that total receipts will more likely be close to forecasts – with the range expected to have a limited downside of 10% growth (in comparison with a 12% BE) and a significant upside of 31% growth.

In a year of limited growth expectations and the unlikely possibility of major non-tax revenues trickling in (particularly, recent trends in the disinvestment receipts), the upside is unlikely to be achieved, though the downside is limited. However, this is more likely to be on account of non-tax receipts than tax collections where the forecast range is wider.

Increases in tax collections can range anywhere between 5% and 29% though the average will be close to the forecast at around 17%. Given that over the past two years, the government has overestimated tax collections, the risk to the downside looks higher in this case than the upside.

Nevertheless, tax collections did grow by over 16.5% in 2012-13 in comparison with the actuals for 2011-12. If there is some effort on tax collections and if higher growth kicks in, the Government might just pull this one off...though there is an ‘if’ here as of now because we are still in a relatively weak global environment, which makes foreign inflows sporadic. Also, the domestic economy is still gripped by weaker demand and high inflation. As a result, disinvestment receipts might not be as positive as in a boom economy and tax collections could also take some hit, thus impacting overall receipts.