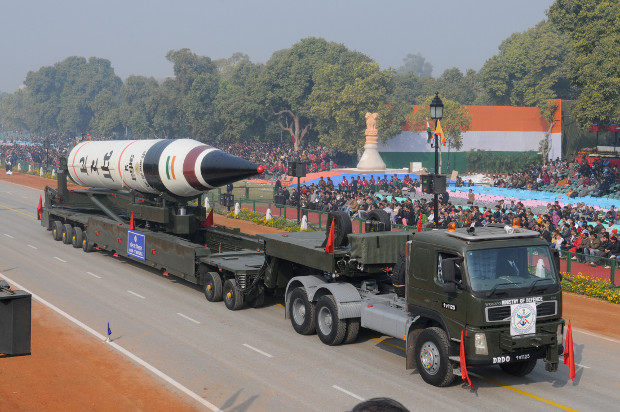 The Agni-V Missile in a dress rehearsal for the Republic Day Parade in January 2013. After a terrorist attack on an army garrison in the Kashmir town of Uri claimed the lives of 18 Indian soldiers, as the Indian Army considers armed options, and a member of Parliament of the ruling Bharatiya Janata Party urges a nuclear attack, projections made by researchers from three US universities in 2007 are a reminder of the costs of nuclear war.

If India and Pakistan fought a war detonating 100 nuclear warheads (around half of their combined arsenal), each equivalent to a 15-kiloton Hiroshima bomb, more than 21 million people will be directly killed, about half the world’s protective ozone layer would be destroyed, and a “nuclear winter” would cripple the monsoons and agriculture worldwide.

As the Indian Army reports striking terrorist camps across the border, and a member of Parliament (MP) of the ruling Bharatiya Janata Party (BJP) urges a nuclear attack and the Pakistan defence minister threatens to “annihilate” India in return, these projections, made by researchers from three US universities in 2007, are a reminder of the costs of nuclear war.

But the real costs would be higher and not just in India and Pakistan, where the first 21 million people--half the death toll of World War II--would perish within the first week from blast effects, burns and acute radiation, according to the 2007 study by researchers from Rutgers University, University of Colorado-Boulder and University of California, Los Angeles, all in the USA.

This death toll would be 2,221 times the number of civilians and security forces killed by terrorists in India over nine years to 2015, according to an IndiaSpend analysis of South Asia Terrorism Portal data.

Another two billion people worldwide would face risks of severe starvation due to the climatic effects of the nuclear-weapon use in the subcontinent, according to this 2013 assessment by the International Physicians for the Prevention of Nuclear War, a global federation of physicians.

Talk of war began after a terrorist attack on an army garrison in the Kashmir town of Uri claimed the lives of 18 Indian soldiers. The Indian Army said the attack was carried out by four terrorists from the Jaish-e-Mohammed (Army of Mohammed) group, based in Pakistan.

Pakistan’s defence minister Khawaja M Asif responded to threats from India by saying, “If Pakistan’s security is threatened, we will not hesitate in using tactical (nuclear) weapons.”

“At the end of the day, India has to ensure that the options it exercises--particularly the military ones--do not leave it worse off than before in terms of casualties and costs,” wrote analyst Manoj Joshi in The Wire.

As many as 66% Pakistani nuclear warheads are mounted on 86 land-based ballistic missiles, according to Bulletin of the Atomic Scientists data estimates.

Pakistan’s Hatf (named after the sword of Prophet Muhammad) series of ballistic missiles has been developed–and is still under development–keeping India in mind.

A major attack by Pakistan’s nuclear-tipped medium-range ballistic missiles (MRBMs) would likely target India’s four major metropolitan cities--New Delhi, Mumbai, Bengaluru and Chennai (depending on where the missile is fired from), according to Sameer Patil, fellow, national security, ethnic conflict and terrorism at Gateway House, a think tank in Mumbai.

The MRBMs would also target “the major commands of the Indian Army”, Patil told IndiaSpend.

Nearly half (40) of Pakistan’s ballistic missile warheads could be mated to Ghauri (named after 12th-century Afghan king Shahbuddin Ghauri, also known as Muhammad of Ghauri) MRBMs. The missile has a claimed range of 1,300 km and can target Delhi, Jaipur, Ahmedabad, Mumbai, Pune, Nagpur, Bhopal and Lucknow, according to this 2006 report on Pakistan’s ballistic missile programme by the National Institute of Advanced Studies (NIAS), Bengaluru.

Pakistan has an estimated eight warheads which could be mated to the Shaheen (Falcon) II. This MRBM has a range of 2,500 km and can target most major Indian cities, including Kolkata on the east coast. 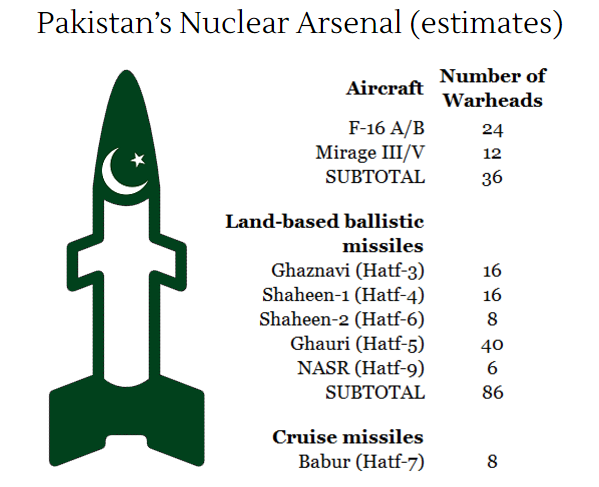 An estimated 16 warheads could be fired atop the short-range Ghaznavi (named after the 11th-century Afghan invader Mahmud Ghazni) ballistic missile. With a range of 270 km to 350 km, it can target Ludhiana, Ahmedabad and the outer perimeter of Delhi.

Pakistan has an estimated 16 nuclear-tipped Shaheen1 (falcon), short-range ballistic missiles (IRBM), having a 750 km range which can reach Ludhiana, Delhi, Jaipur and Ahmedabad.

Pakistan has an estimated six 60-km range Nasr missiles, which could be mated to nuclear weapons. These tactical nuclear missiles could target “advancing battle formations of the Indian Army”, according to Patil. These missiles could be what Asif referred to.

An estimated 36 nuclear warheads, accounting for 28% of Pakistan’s total, can be delivered using aircraft. US-made F-16 A/B aircraft can deliver 24 nuclear bombs while the French-made Mirage III/V can deliver 12.

India has deployed 56 Prithvi (earth) and Agni (fire) series of surface-to-surface ballistic missiles, which carry 53% of India’s 106 estimated warheads, according to the Bulletin of Atomic Scientists.

Once commissioned, Arihant would give India a strategic nuclear triad and second strike capability, as this July 2015 IndiaSpend report notes.

However, he cautioned: “The fallout of the nuclear attacks on Lahore and Karachi, for instance, would not just be restricted to the Pakistani territory, and depending on the wind directions, can affect both Indian and Afghan border territories.” 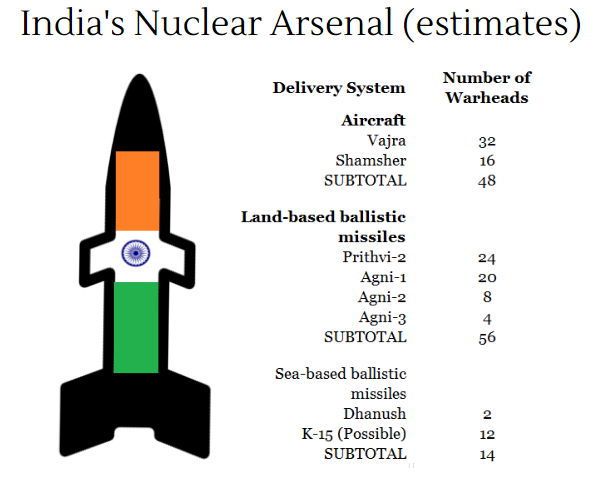 The 250 km-range Prithvi SRBM acts as a delivery system for 24 of India’s warheads. These are capable of hitting major Pakistani cities, such as Lahore, Sialkot, the capital Islamabad, and Rawalpindi, according to this May 2015 IndiaSpend analysis.

Agni III, IV and V, with their longer ranges, might be able to reach all of Pakistan, but it can be safely said that they are directed more towards China.

India's aircraft can deliver an estimated 45% of 106 warheads. The Indian Air Force’s Jaguar fighter bombers can deliver about 16 nuclear warheads, while the French-built Mirage-2000 fleet can deliver 32.

Update: This story has been updated to reflect news of Indian strikes in Pakistan.