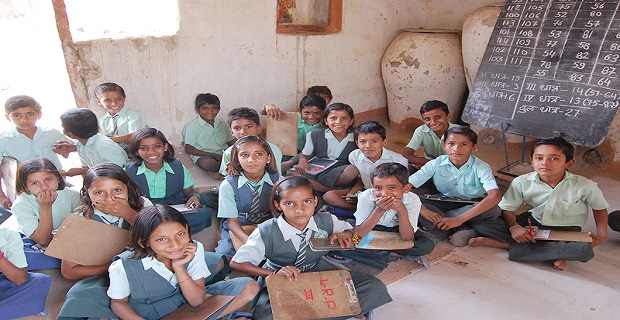 The good and well documented news about primary education in India is that enrolment is almost 100% i.e. almost all children are in school; the bad news is that there has been no improvement in the quality of education.

The most stark figures are this: only 40% of Std III students can read at least a Std I level text while only 26% children in Std III can do any subtraction.

These are some of the findings of the Annual State of Education Report (ASER), 2013, the largest annual household survey of children in rural India that focuses on the status of schooling and basic learning.

The study is run by Pratham, an NGO engaged in the field of education, and is conducted by local organisations and institutions. In 2013, ASER covered 550 rural districts, close to 16,000 villages, 0.3 million households and 0.6 million children in the age group of 3-16 years.

But there are other equally worrying conclusions. Chiefly, the widening gap in quality of education between private and Government schools. This might not be a surprise but what might come as a surprise is the sheer dominance of private tuitions as a booster shot to children across schools.

While private tuitions are also institutionalised in some ways (large companies that do it also have private equity investments), the distortion caused by the shift of teaching talent to the bridge rather than the core might not be a good one.

Let’s first look at a graph below that highlights the increasing divide between private and Government schools:

(Note: The total nos for the above charts are the weighted average of govt and pvt schools only)

It is clear from the above that there is an increasing gap between Government and private schools. At the all-India level, for Std. III, the proportion of children able to read at least a Std. I level paragraph has risen slightly from 38.8% in 2012 to 40.2% in 2013.

The increase is mainly coming from the improvement among private school children from 55.3% to 59.6%. In Government schools, the ratio remains unchanged from 2012 at around 32%.

Let us now look states with the highest number of children in private schools:

Manipur has the highest number of school children in private schools with 70%. We can see that children in all these states have higher than the all-India average reading and math skills. For example, the reading skills in all the states, except Uttar Pradesh, are way above the national average. The same can be said for advanced math skills and reading skills.

Another aspect covered by ASER for the first time was the fees being paid for private coaching or tuitions. It has been observed that private tuition helps narrow the difference between private and Government schools to a large extent. Another interesting facet of tuitions is that children in private schools also improve their performance with tuitionbut not as much as those in Government schools.

Nationally, 68.4% of Std. I-V Government school students who go to private tutors pay Rs100 or less per month. Among private school students of Std. I-V, 36.7% pay Rs100 or less per month and the same proportion pay between Rs 101 and Rs 200 per month for private tuition. The mean tuition expenditure per child in rural India is Rs 168 per month. Richer households spend a little more - mean tuition expenditure is Rs 191 for children who live in pucca homes while the poorer households end up paying Rs146 per month.

Let us now look at the performance of states with the highest number of students attending tuitions and their impact on reading and math skills:

So, tuitions are increasingly helping students get better in reading and math skills. For example, the reading skills of Manipuri students are nearly 78% while the all-India level is only 54%. The same can be said for math skills. States with a low proportion of private schooling, like Bihar, gain from tuition for Government school children.

Children from low income families are also gaining from tuitions; it also seems that tuition makes up for other household-based disadvantages. These children getting tuition have very similar learning outcomes to children from middle income families and do not take private tuition. Further, additional input in terms of private schooling results in a similar jump in learning outcomes.

What these numbers seem to suggest is that private inputs into schooling may be levelling the playing field, giving poor children a leg-up. Even after we control for other household characteristics and parents' education, the learning levels of poor children improves significantly with tuition - about 12 percentage points.

The report says that Government schools need to take home two valuable lessons from both private schools and tuitions. First is incentives and accountability to customers. “If someone is paying for a service, the onus is on the service provider to deliver, because the consumer can always vote with her feet,” says the report.

Secondly, the learning and teaching methods are organised differently in the private sector. Most of the Government teachers are asked to focus on completing the curriculum rather than the understanding of the child.

Even though the report shows that private schools have better outcomes, the results, by themselves, are not very promising. The report also shows that even though there is better education being offered to students of private schools, Government school students can make up for it through private tuitions. As the report correctly observes: “We don’t need more allocations, what we need is more effective use of the allocations we already have.”