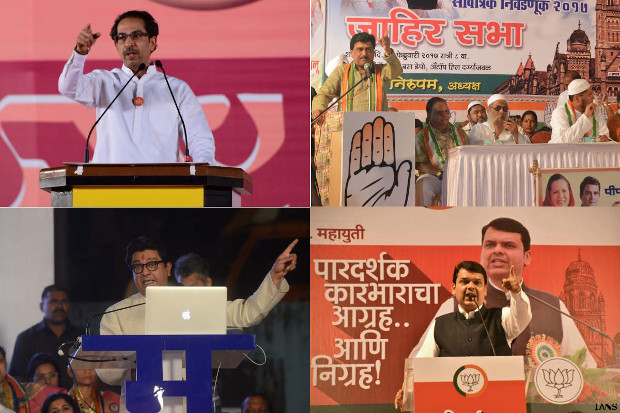 As India's richest municipal corporation goes to elections on February 21, 2017, an IndiaSpend analysis finds that four of five top corporators, by attendance, are from the Shiv Sena, a party that also reported the highest overall average attendance. We also found that most of the top five corporators, by attendance and questions asked, are from the city's prosperous western suburbs, and education levels and participation tend to be positively correlated with performance. Four of top five spenders among corporators belong to the Shiv Sena and Maharashtra Navnirman Sena.

The top performing corporators in the Municipal Corporation of Greater Mumbai (MCGM) are from Jogeshwari, Khar and Bandra and belong to the Shiv Sena. Education and criminal records do not necessarily determine performance, although education has a positive link with participation.

If you are from Mumbai, you can find the performance of your Municipal Corporation of Greater Mumbai (MCGM) corporator in this interactive map:

The mean age of corporators is 43 years, and it is below 50 years in all wards. As many as 80% corporators have passed 10th standard and above. 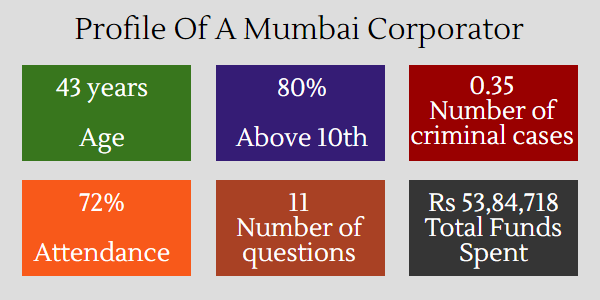 Which corporators participated the most in MCGM 2012-16?

In terms of attendance and number of questions asked, these were the five best corporators:

Most of the top five, by attendance, are, as we said, from the Shiv Sena, whose overall average attendance was followed by the Bharatiya Janata Party (BJP) and Indian National Congress (INC).

Most of The corporators from 'top five' who asked the most questions and attended the most council meetings, were from the western suburbs. A majority of the best wards in attendance and number of questions also are from the city's west.

Among the major parties,NCP corporators asked the highest average number of questions, although only one party corporator (Saida Khan), gets into the top 10 corporators, by questions asked.

MNS asked the least questions, whereas independents fared worst in both participation indicators.

Three of the top five corporators, by attendance, and four of top five, by questions asked, are graduates and above. This probably shows a positive relation between high education and greater participation. The overall comparison of education level to attendance and number of questions, however, did not show a strong correlation, although it showed a positive trend.

Only one of the top five by attendance and questions asked has a criminal record. That is Anant Nar, with 12 criminal cases: Participation is apparently not an indicator for level of criminal activity of the corporator.

Although they do not feature in top five spenders, three of the top corporators in terms of attendance and all of the top five corporators by questions asked have spent more than the overall annual average.

The performance and participation of corporators however cannot be generalised by area or party but as Milind Mhaske of Praja Foundation suggests, it is connected with individual corporator's research, work and initiative.

Who spent the most funds?

In terms of funds spent during their five-year terms and the average annual funds spent in their constituencies, the following five did best:

Four of the top five 'spenders' belong to regional parties such as Shiv Sena and Maharashtra Navnirman Sena. However, all the parties, including independents, spend, on average, about Rs 2.1 crore to Rs 2.2 crore per corporator.

(Spencer is an intern at IndiaSpend.)