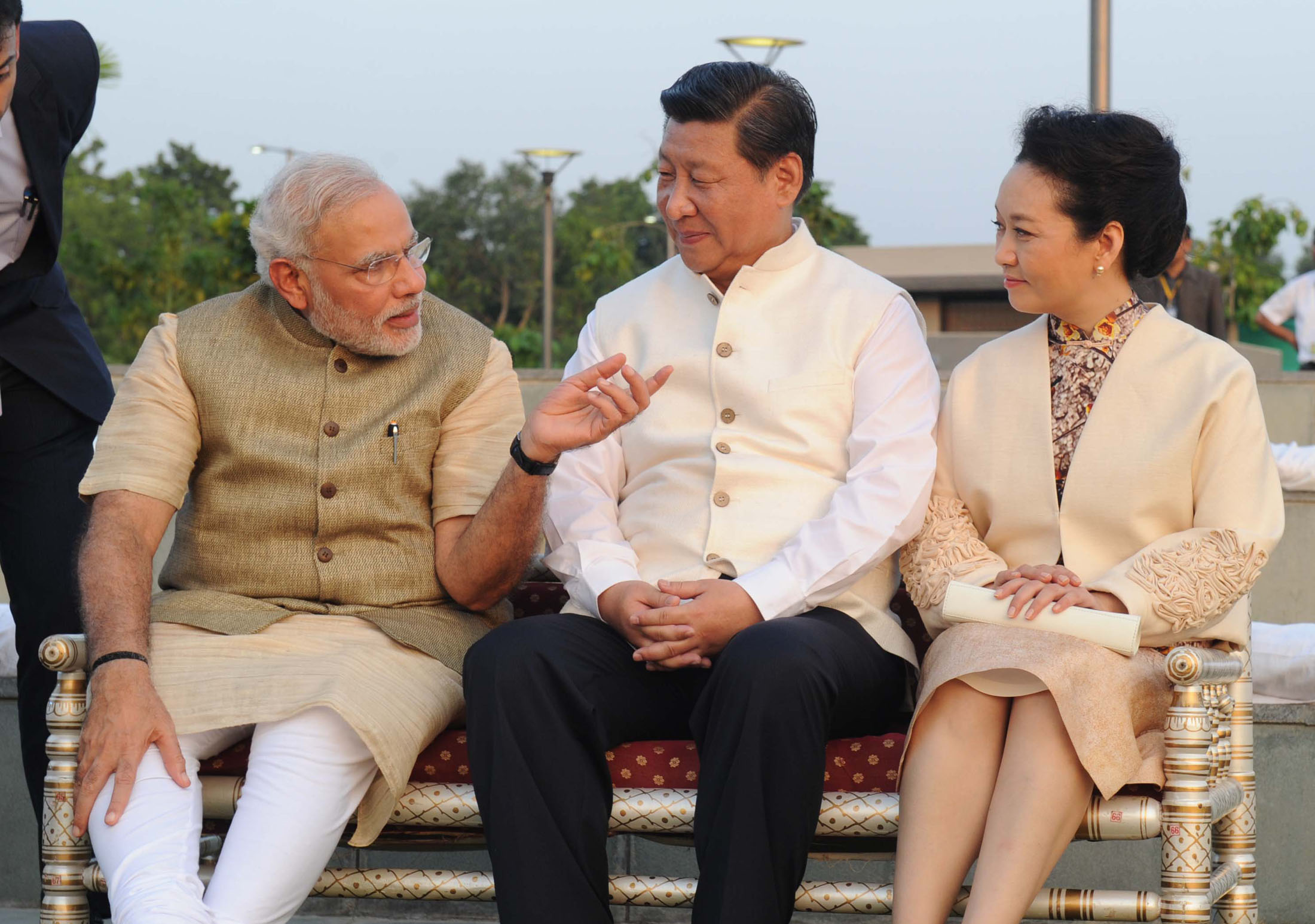 “China’s interests have never been so closely connected with those of the rest of Asia and the world in both scope and depth ... It’s projected that in the coming five years, China’s import will reach some $10-trillion, its outbound investment will reach $500-billion and the number of its outbound tourists may well exceed 400 million.”

That’s how Xi Jinping, the president of the world’s second-largest economy, sums up the scope of doing business with China.

China’s foreign direct investment (FDI) in India is $940 million; in contrast Chinese FDI in Myanmar is $14-billion. In Brazil: $17-billion.

Hardly 100 companies from the world’s second-largest economy have offices in India.

Some of them have already moved out.

India and China have made grand promises to improve economic ties during previous high-level meetings that ended with no major improvement on the ground in bilateral investment and business. But there’s speculation about a new deal in the economic relationship as it is directed by two statesmen determined to promote business with the other for their own national interests. Modi needs Chinese investment and expertise to rebuild India’s infrastructure and revive the manufacturing sector to lift economic growth from below 5 per cent.

A friendless China is keen to leverage economic diplomacy to buy stability in relations with India while it is preoccupied with territorial and maritime tensions in its eastern neighbourhood with Japan, Vietnam and Philippines. Beijing sees India as a potential overseas manufacturing base for its infrastructure companies and capital goods sector as the Chinese economy struggles to rein in production costs and simultaneously expand its services sector.

A reset in business relations across the world’s longest disputed Sino-Indian border will show results only in the long-term.

New Delhi and Beijing have discussed areas of engagement with a Chinese industrial park each in Gujarat and Maharashtra, more balanced bilateral trade through more Indian imports from China and Chinese financing and technical support to build Indian infrastructure worthy of a world-class manufacturing centre. Given the unpredictable nature of Sino-Indian relations in the last five years, bilateral business relations will not remain unaffected by future political disputes related to visa delays and denials, Chinese border incursions and India’s policy towards Tibet and China’s policy claiming Arunachal Pradesh.

The post-recession years from 2008-09 brought a spurt in the engagement between investment and trade promotion officials at the state and provincial level in India and China. Business delegations across the border became more frequent as Chinese enterprises with excess capacity and a state mandate to ‘go global’ looked for their first-ever opportunities in India. The networking did not necessarily break ground in new projects and investments.

Plans for a Chinese industrial park each in Gujarat and Maharashtra --- there is no such Indian industrial park in China --- can potentially bridge the deficit in economic engagement and trust if visa and border disputes don’t get in the way. The two parks can, in the long-term, provide a rare common ground for Indians and Chinese to learn to do business together and plan more bilateral investments. The industrial parks will boost prospects for Chinese manufacturing companies in India but Indian software majors in China, meanwhile, are still struggling to break into the domestic market and scale up operations. 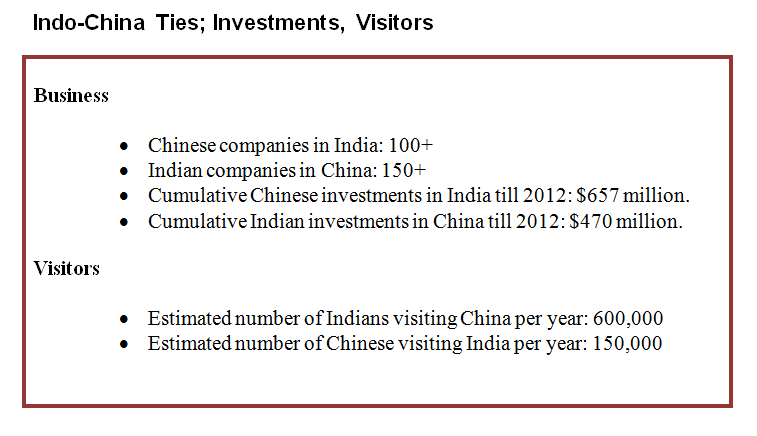 When Chinese technocrats observe Indian railway stations, they remember their creaky train journeys from the early 1990s and envision tearing down old stations to replace them at record speed with giant glass-and-steel structures like Asia’s largest hi-speed railway station built in Beijing in 2008 for bullet trains zipping at 350 kmph.

The railways are a lifeline for the world’s two most populous nations in more common ways than one may notice at a glance. China has built almost 10,000-km of the world’s longest hi-speed railroad and is building over 100 new airports by 2020. But millions of its migrant passengers still jostle for cheap tickets on crowded slow-speed trains and they carry footstools to perch on aisles for commutes that can last three to four days across provinces.

Chinese investment and technological support in Indian railway infrastructure looks promising on paper. Chinese railway equipment was exported to over 30 nations in 2010 and Chinese enterprises are executing railway projects across the world. But closer home, India and China are inexperienced in working together. Chinese companies that build rail projects at record-breaking speeds will struggle to cope, like the Chinese road-building majors have in India, when they face delays at every stage of project execution.

The Chinese railway department has a history of operating as Beijing’s most secretive government monopoly, leading to possible problems in transparency and communication. The roll-out of India’s first-ever bullet trains is years away. Cooperation in railways will show tangible results only in the long-term.

In every high-level visit since the last decade, the Chinese have come with assurances to help balance bilateral trade that remains largely in China’s favour. Those assurances were accompanied by short-term measures in the form of major procurement deals to source Indian products notably in previous delegations led by Premier Wen Jiabao in 2010 and Premier Li Keqiang last year.

India’s trade deficit grows as it imports more from China than it exports, with a trade basket comprising the export of raw materials and imports of Chinese hi-tech products. In 2012, India was China’s 15th largest trade partner with a 1.72 per cent share in China’s over-all trade, recording a decline of 10 per cent year-on-year, and comprised just a 1.1 per cent share in China’s overall imports.

A new study says that India in fact ‘has been importing a large amount of uncompetitive products that can be easily supplied by other competitors of China at a competitive cheaper price in India’. The study released in January by Research and Information System for Developing Countries (RIS), a New Delhi-based think-tank, lists several constraints regarding custom procedures, standards, certification and regulatory practices and quantitative restrictions experienced by Indian exporters trading with China. Exporters and companies without local language skills and guanxi (connections) struggle to scale these regulations that become business barriers.

“Rules and regulations pertaining to standards and certification as applied to imports are different from those applied to domestic goods and these are frequently changed, the details of which are not easily available in a published form in the English language,’’ the RIS report noted on China. “The implementation of these regulations is different at different levels of government, with very little coordination between national and sub-national levels … Certification remains difficult, time consuming and a costly process for many commodities of interest to Indian exporters.”

The trade gap can be narrowed to some extent by diversifying India’s export basket. But New Delhi’s decade-long objections to the lack of access to the Chinese market for Indian pharmaceuticals, IT products, agriculture and engineering goods is unlikely to be resolved in the short-term.

The spirit of the business talks between Modi and Xi may not necessarily resonate in far-away Chinese trading centres where Sino-Indian trade disputes over delayed payments are known to occur. One such dispute spilled over into bilateral politics in Yiwu, the world’s largest wholesale market in eastern China, in 2012.

Will the two strategic rivals achieve the $100-billion trade target by next year? It looked unlikely until last year. But Xi’s reported 100-member delegation of technocrats and honchos will come armed with deals seeking to turnaround trade data --- temporarily ---- at least. Chinese planners rarely miss a target, and for Beijing, the world’s biggest trader, saving face is the most significant aspect of a relationship.

(Reshma Patil is a former China Correspondent and author of ‘Strangers across the Border: Indian encounters in boomtown China’)