The 5% Poison Pill For Lalu Yadav 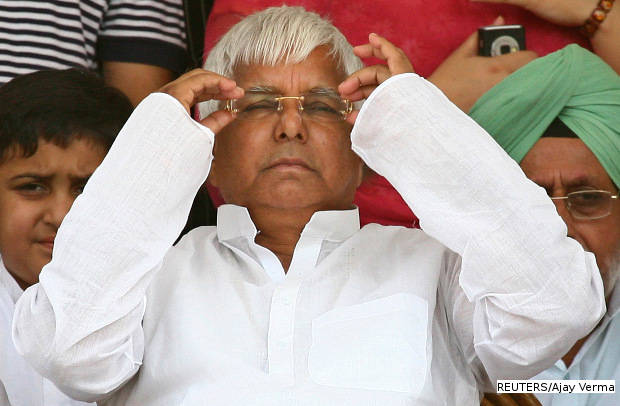 “I am ready to consume poison to crush the snake of communalism,” said Rashtriya Janata Dal (RJD) supremo Lalu Prasad Yadav, almost conjuring up an image of Lord Shiva with the serpent Vasuki coiled around his neck.

Lalu Yadav’s insinuation was that, to save the state of Bihar from the venom of BJP’s communalism, he was ready to accept the leadership of his once arch rival and current Chief Minister, Nitish Kumar for the upcoming elections in Bihar. Nitish Kumar was thus crowned the leader of the newly concocted alliance of the Janata Dal (United), RJD and the Congress party to contest against the BJP in the Bihar elections later this year.

The rhetoric of communalism aside, surely the counterfactual maths--had their votes been combined in the 2014 Lok Sabha elections, the BJP led NDA could have been reduced to a mere 11 seats from the current 31--would have played a catalytic role in Lalu Yadav’s embrace of Nitish Kumar.

A cursory analysis of vote shares of all these parties in the 2014 elections would make it seem obvious that it didn’t need a snake charmer to woo them together. However, our trend analysis of voter choices in Bihar over the past decade reveals that the upcoming elections may turn out to be a much closer snakes and ladders battle despite the potential consolidation of anti-BJP votes.

About 155 million voters across 243 constituencies in Bihar have exercised their electoral choices in three Vidhan Sabha and three Lok Sabha elections since 2004. The BJP, JD(U), RJD, Congress and Ram Vilas Paswan’s Lok Janshakti Party have each contested elections in Bihar in various combinations. When presented a ballot with the BJP, JD(U), RJD and Congress candidates, an increasing number of Biharis choose the BJP candidate over all the others combined. In the 2004 Lok Sabha election, out of 100 voters in Bihar that had a BJP or a RJD/JD(U)/Congress candidate on their ballot, 63 voters chose either of the three parties and 36 chose the BJP.

In the 2014 Lok Sabha, 40 out of 100 voters chose the BJP and 45 voters chose either of the three parties with the rest choosing others. The difference in contested vote shares between BJP and the combined vote shares of the three parties has narrowed from 26% in the 2004 Lok Sabha election to 5% in the 2014 elections. This is not to be confused with the simplistic overall vote shares of each party made available by the Election Commission. This is an analysis of how have voters in Bihar voted over the past six elections since 2004 when there was a choice of a candidate from one or more of JD(U), RJD and Congress parties vis-à-vis the BJP.

There is a clear decline in percentage of voters choosing the RJD or JD(U) or Congress combined in every election since the 2005 October Vidhan Sabha elections. While it is numerically true that in the most recent 2014 Lok Sabha elections, an alliance of JD(U), RJD and Congress would have won more votes than the NDA in 163 out of the 243 constituencies, trends matter more than actual levels.

On average, of 100 voters that had a choice among each of these parties, 53 chose the RJD/JD(U)/Congress combine in the 2005 Vidhan Sabha elections, 54 in the 2009 Lok Sabha election, 50 in the 2010 Vidhan Sabha election and 45 in the 2014 Lok Sabha election. It is also abundantly clear from the analysis that contrary to ideological claims, the RJD and JD(U) had no choice but to join hands to try to stall the BJP. It is evident from the chart that the gap between the contested vote shares of the combined force and the BJP has narrowing consistently and the gap most recently in the 2014 Lok Sabha elections was 5%. Will five more out of every 100 voters switch to the BJP in the 2015 Bihar elections to enable a BJP victory against the combined force or will this narrowing gap reverse, is the poisonous question for Lalu Prasad Yadav. ¦