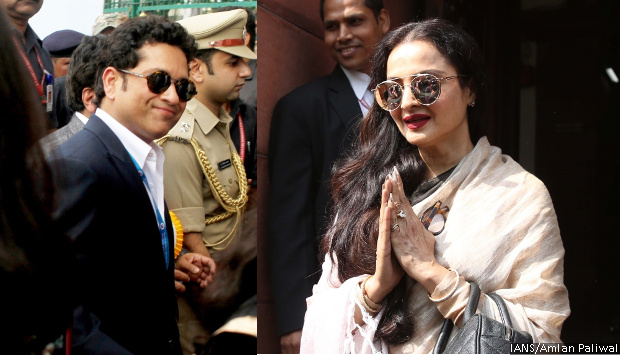 Former India cricketer Sachin Tendulkar and yesteryear actress Rekha are the worst performers in attendance in the Rajya Sabha (upper house of Parliament) among the 12 nominated members, according to an analysis by Factly.in, a data journalism portal.

The difference in the expenditure is only because of the allowances, since all other components are fixed for every member (MP). If a particular MP attended the house more often than others and has travelled more extensively than others, the expenditure incurred on him/her would be high. In Rekha’s case, it is the opposite.

Each MP is entitled to the following:

These members are nominated by the President based on the advice of the government of the day. Article 80(3) of the Constitution of India authorises the President to nominate a maximum of 12 members to the Rajya Sabha, and the members nominated shall have special knowledge or practical experience in the fields of literature, science, art and social service.

Samajwadi Party MP Naresh Agarwal had raised the issue of Tendulkar and Rekha’s attendance in the Rajya Sabha, lamenting that they hardly attend the house.

Rekha has not asked a single question

Tendulkar and Rekha have not participated in a single debate in their nearly five-year stint in the Rajya Sabha. Malayalam actor Suresh Gopi and boxer MC Mary Kom--who were nominated in 2016, participated in three and two debates, respectively.

Under the Member of Parliament Local Area Development Scheme (MPLADS), each MP can suggest to the district collector of the nodal district chosen by them, works to the tune of Rs 5 crore per annum. The nominated Rajya Sabha MPs may select any district from any state for implementation of their choice of work under the scheme.

Under MPLADS, the role of the MP is limited to the recommendation of works. Thereafter, it is the responsibility of the district authority to sanction, execute and complete the works recommended by the MP within the stipulated time period.

The Rs 5 crore per annum is not automatically released each year. The first installment of Rs 2.5 crore is released without any condition. The subsequent installments are released subject to conditions such as utilisation of the previous installment. 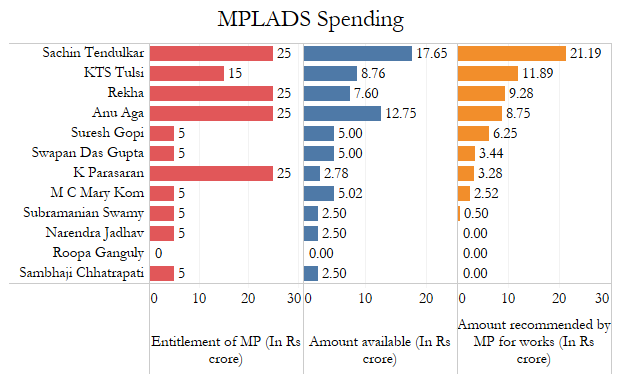