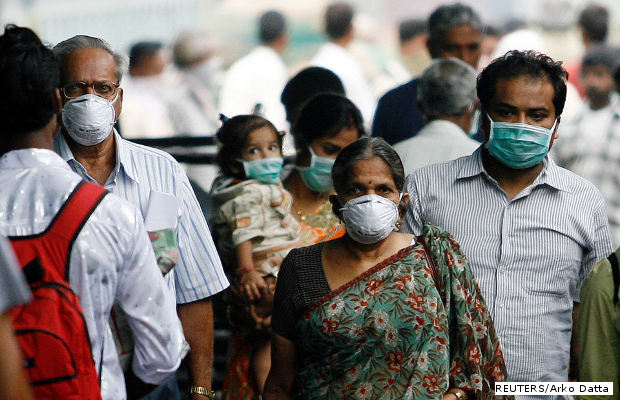 Earlier this week, the Shani mandir—dedicated to Shani Dev, a Hindu god who wards off evil—in Jaipur’s Janta Colony saw a strange ritual unfold. A gathering of men praying for the health of Rajasthan’s former chief minister, Ashok Gehlot, gathered around a sacred fire, wearing the image of Gehlot’s face upon theirs.

Face masks (albeit of a less sycophantic variety) are increasingly becoming common in some parts of India as a virus once limited to pigs sweeps through the country, claiming 191 lives in January alone. If a man like Gehlot could get swine flu, who was safe?

“Why didn’t the government start an awareness campaign when there was time?” Gehlot said. “People are falling victim and dying in the absence of information.”

Despite growing panic and casualties reported in states like Delhi, Rajasthan, Pune and Telangana in the first 15 days of the year, there are several reasons that doctors are not alarmed at the prospect of a “pandemic” in India.

Source: Ministry of Health & Family Welfare;*Figures as of January 15, 2015

One reason is that the world is currently in a post-pandemic period of the H1N1 virus. Swine flu (called thus because the virus originally spread through contact with pigs, later mutating to spread through humans), like most flus, is seasonal, and easily prevented through vaccination.

“Part of the problem is alarmist media reports that say ‘so many people have already died in 2015! It’s only been two months!’” said Dr Ajit Singh, Additional Surgeon at Jaipur’s SMS (Sawai Man Singh) hospital. “But December to February has always been a time for viral fevers and infections. Everybody gets the flu at this time.”

As the numbers spike with new hosts being infected, a majority of them are recovering just fine, said Singh. By the end of February, he believes, the virus will have run its course in most parts of the country. That does not stem the panic though, with the virus striking India’s upper classes.

Transmitted from person to person, swine flu is contagious, spreading fairly fast in close proximity. People caring for those already infected are at high risk of contracting the airborne virus.

In its first phase, it feels and looks like a common flu and does not require special care. In its second phase, the symptoms become more acute: the patient begins to run a high temperature, typically has a dry cough accompanied by body aches and needs rest and medical attention. In the third phase, a patient has difficulty breathing, extremely high fever, and nails may begin to turn blue or purple.

A patient in this stage needs quarantine and hospitalisation. Fortunately, once people are infected with swine flu, they become immune to the virus, but as Dr Singh points out it may not be the wisest idea to throw ‘swine flu parties’, an attempt to gain immunity by being in deliberate contact with someone with a mild form of the disease, a common-enough approach with diseases like chicken pox.

“A healthy person can bounce back quite fast from a regular flu,” he said. “The unique characteristic of H1N1 is that even previously healthy people can develop acute respiratory problems and flu-related complications, like bacterial pneumonia,” he said.

The most effective remedy for swine flu at the moment is Oseltamivir, marketed under the trade name Tamiflu, one of only two first-line drugs approveded to treat influenza (the other is an inhaler called Relenza). Tamiflu is sold by a pharma company called Roche, and it claims to reduce the occurrence of respiratory complications in influenza patients, diminish flu symptoms by a day and decrease the need for hospitalisation in several patients, a claim recently supported by a Lancet study that tested approximately 4,300 patients.

Tamiflu appears to work, but it has been battling for its reputation in the medical community, since a global network of healthcare academics pointed out that Roche funded at least part of the Lancet study that proved the drug’s efficacy.

More worrying for India, are reports that Tamiflu is evidently in short supply at private hospitals, such as New Delhi’s Apollo, possibly as a result of conglomerates stockpiling the drug to increase its value.

In the wake of Gehlot’s illness, the state government of Rajasthan recently ordered an additional 1 million tablets, asking all government hospitals to stock the drug.

While most chemists in New Delhi, Rajasthan and Bhopal said they did not keep Tamiflu, Sister Kamala, a nurse at the swine flu wing of Bhopal’s JP Hospital told me that the drug was being prescribed free of cost to those who tested positive for H1N1 at Bhopal’s two state-run hospitals, JP and Hamidiya.

“There is no shortage as such of the drug,” she said. “The only problem we foresee is that in a state of panic, people are consuming Tamiflu at the first sign of a cough or a sneeze. Those who need the drug are being unable to get an entire course because those who don’t need it are popping it like Vicks.”

Sister Kamala has been administering H1N1 vaccinations, called InfluVac and Vaccigrip, since November, and has attended to seven patients who tested positive for swine flu in the past two months.

She is yet to display any symptoms of the flu herself. “Wearing a mask will not help,” she said looking at mine. “Wash your hands regularly, build your immunity. Eat green vegetables.”