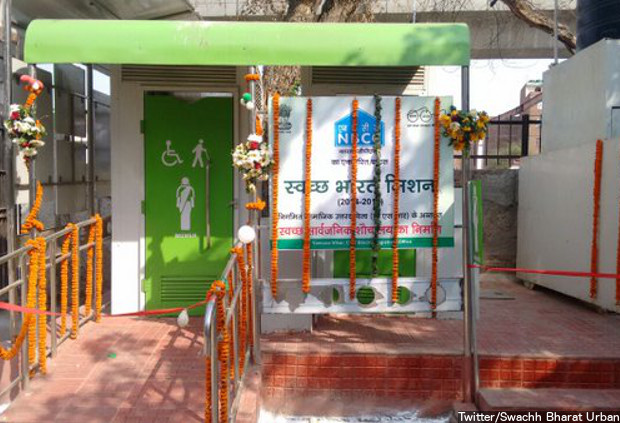 A public toilet which was recently built under the Swachh Bharat Mission in Delhi.

*Gujarat constructed 327,880 individual toilets until December 2015, more than any other state.

India's ambitious toilet-construction programme--part of the Swachh Bharat (Clean India) mission to make India open-defecation free by 2019--is slipping, according to government data submitted to the Lok Sabha, the lower house of Parliament.

Another part of the Swachh Bharat Mission, to process urban garbage, is also failing its targets, as the second part of this series will detail.

Even if the toilet programme, started in September 2015, is brought on track, Indian cities and towns currently process no more than a third of the sewage generated by 377 million people, IndiaSpend reported in January 2016. The rest is randomly dumped in rivers, seas, lakes and wells, polluting three-fourths of India’s water bodies.

As many as 85 million people in urban India lack adequate sanitation, more than Germany’s population.

About 1.9 million toilets in urban areas are under construction, according to the government, but progress is slow.

Four of five states constructing most toilets governed by the BJP

Four of the five states that do best in toilet construction are governed by India's ruling Bharatiya Janata Party (BJP).

Gujarat constructed the most toilets until December 2015, with 327,880, followed by Madhya Pradesh. Andhra Pradesh, the only non-BJP state in the top five, comes in third.

Some areas that are constructing toilets slowly, such as Delhi and Uttarakhand, may already have a high percentage of homes with toilets.

More Indians (households) use toilets in urban areas (81%) than in rural areas (43%), according to this Lok Sabha reply. Use varies, as some cities have better toilet facilities than others, although there are no reliable data.

As far as community toilet construction goes, Delhi tops the list, indicating a government effort to provide sanitation to slums, which is largely where such toilets are built.

Sewage systems are as important as toilet construction. India has 522 working sewage treatment plants, 62 of which are in Maharashtra, according to this Central Pollution Control Board report.

Only 36.8% wards in urban areas reported a proper liquid-waste disposal system for community and public toilets, according to the Swachhata Status report, released by the National Sample Survey Organization.

Delhi (86.8%), Gujarat (64.4%) and Tamil Nadu (62.6%) were among the states reporting a high percentage of wards with proper liquid-waste disposal systems for community and public toilets, the report said.

Maharashtra just announced it would clean its rivers by increasing investments in sewage treatment and solid-waste management. The government's focus, thus far, has been on industrial effluents alone.

A Swachh Bharat cess, levied from November 2015, ramped up toilet construction nationwide, as IndiaSpend reported this week. Nearly 16 million toilets were constructed over two years (in rural areas), according to the government; 95 million need to be built over the next three to meet the government’s target of making India open-defecation free by 2019.

Update: This article was based on a question answered in the Lok Sabha on December 9, 2015. The same question was asked again on April 27, 2016, and the government released new data:

As many as 1.3 million household toilets have been built, against a target of target of 2.5 million toilets in urban areas. Similarly, 68% of the targeted 100,000 community toilets were built by March 2016. About 2.4 million toilets in urban areas are under construction, according to the government, but progress is slow. Gujarat constructed the most toilets between until December 2015, with 497,634, followed by Madhya Pradesh. Delhi and Kerala built almost no toilets. Odisha, where 35.2% of the urban population has no toilets, met 2% of its targets.