Surge In Female Contestants, Not MLAs 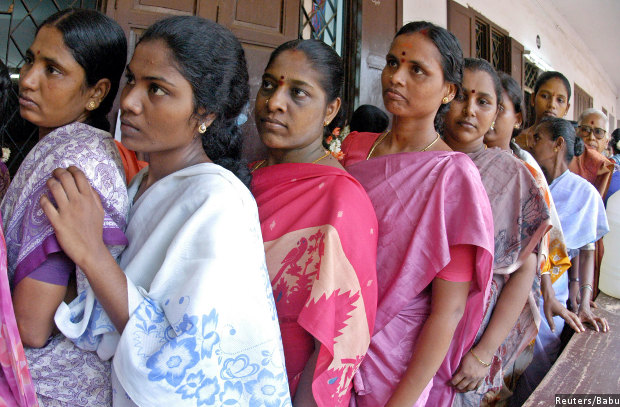 Women gather to vote outside a polling booth in Chennai, Tamil Nadu. Two of the four states which went to polls recently had incumbent women chief ministers who registered consecutive victories for their parties, but there was no significant increase in the number of female MLAs elected.

Female contestants increased across the four states that went to polls recently—but not legislators—and three times as many women contested in Kerala compared to the 2011 elections, according to an IndiaSpend analysis of electoral data.

Increase in women candidates, not MLAs

While both the incumbent CMs won, there was no significant increase in the number of female members of legislative assembly (MLAs) elected to the four state assemblies.

Kerala, the state with the best indicators of gender development, saw almost three times as many women contestants during the recent elections as it did in the 2011 elections. However, only eight of 105 contestants (7.6%) won.

A third (33) of female candidates contested as independents in Kerala.

The number of women MLAs increased by one in both Kerala and Tamil Nadu.

Do women leaders give more tickets to women candidates?

The highest proportion of tickets was given to women by Jayalalithaa in Tamil Nadu over the past five elections, except in 2011, when more women were given tickets by the rival Dravida Munnetra Kazhagam (DMK), according to data collated by Gender In Politics, a web-based project that tracks women in politics, using data from the Election Commission.

The Communist Party of India (Marxist), the longest ruling party in West Bengal, was always ahead of other parties in the state in selecting female candidates.

This year, Trinamool gave the highest proportion (15%) of tickets to women candidates in West Bengal.