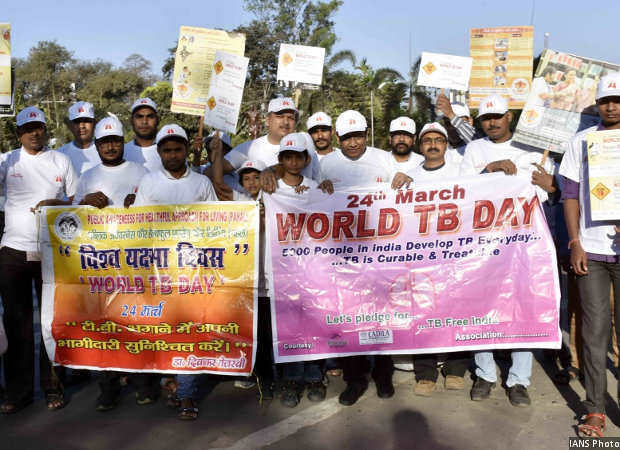 Only 73% of one kind of tuberculosis (TB) cases registered for treatment were successfully treated, much lower than the government-reported 84% success rate, according to a new study published in the United States and United Kingdom-based health journal Plos Medicine.

India has more than a quarter of the world’s tuberculosis burden, with an estimated 2.8 million new cases of TB in the country in 2015. Improving TB diagnosis and care within the government system could reduce the spread of TB and TB deaths--480,000 in 2015.

The estimates in the study--authored by a group of researchers, and published on October 25--are based on World Health Organization data, data from India’s national TB programme, and reviews of studies published by other researchers. The study analysed TB cases only within the government programme in India because of a lack of information about TB patients in the private sector--estimated to be between 1.19 and 5.24 million patients in 2014.

Analysing where patients “are getting lost” within the government system could help improve the country-wide program for TB control, said Ramnath Subbaraman, the lead author of the study, an infectious disease physician and lecturer at Harvard Medical School.

The study estimated lower rates of treatment success than those reported by the national TB programme in its annual report: 73% of all new smear-positive cases--cases that were positive for the TB bacteria when tested microbiologically--registered for treatment were successfully treated, compared to 84%, as reported by the government in the 2015 annual report for TB.

Source: Revised National Tuberculosis Control Programme, The Tuberculosis Cascade of Care in India’s Public Sector: A Systematic Review and Meta-analysis, PLoS MedicineNote: Government does not report new smear-negative TB cases; **includes patients who completed treatment and patients who were cured; *TB Patients who did not relapse after one year of completing treatment

For patients who either failed or defaulted in previous treatment, the rate of success when retreated was 51.6%, according to the study. The government reported that 63% of such patients registered for treatment were cured in 2013.

What the national TB programme does not record: How many were cured?

Part of the gap between the numbers reported by the study and the national TB control programme can be explained by different definitions of success in TB treatment.

The study estimated treatment success by patients who did not relapse after one year of completing treatment.

Even though the Standards for TB Care in India recommend that patients should be examined after six and 12 months of treatment completion, the national tuberculosis programme does not provide information in its annual report on the status of all patients after one year. For instance, for several categories of patients--such as those that had extra-pulmonary TB or TB that tested negative when tested microbiologically--the national TB control programme reported how many patients completed treatment, but not how many were cured.

Only tracking “treatment completion is not a good enough measure of how well the program is doing”, according to Subbaraman. He said that all patients in the nationwide program should be tracked for one year after they complete treatment to make sure they don’t relapse.

Officials from the Revised National Tuberculosis Control Programme, as the national TB control programme is known, did not reply, despite repeated requests for comment.

Overall, the public health sector successfully treated less than half of all TB cases in the country, the study estimated. Out of 2.7 million estimated cases of TB in India in 2013, only 39% completed treatment in the national TB control programme, without relapsing after a year of completing treatment. 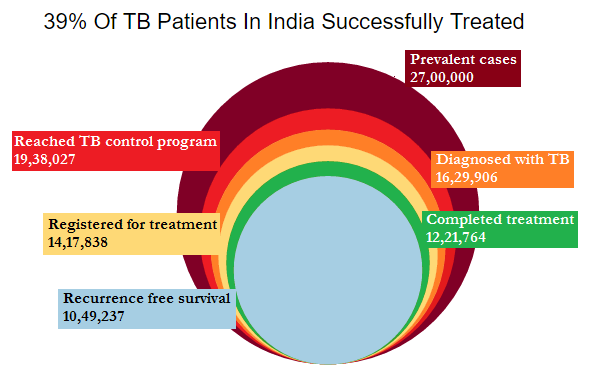 The study also highlighted two other gaps in the programme--diagnosis and registration for treatment.

Out of those TB patients who reached the government system--72% of India’s total TB cases in 2013--more than half a million patients are either not diagnosed correctly, or diagnosed but not registered for treatment, the study found.

Patients are not diagnosed with TB because not everyone with TB can be diagnosed by microbiological testing of sputum--the most common way of diagnosing patients within the national TB control programme. Patients who are diagnosed go ‘missing’ from the government system because they aren’t immediately told they have TB, or because they don’t want to come back to the government for treatment.

“Since this population of half a million patients is willing to engage with public sector services in some capacity, they present a major opportunity for strengthening TB control,” the study said. The study recommended strengthening diagnostic facilities, patient tracking, and making TB care more patient-friendly to improve diagnosis and patient retention within the government system.