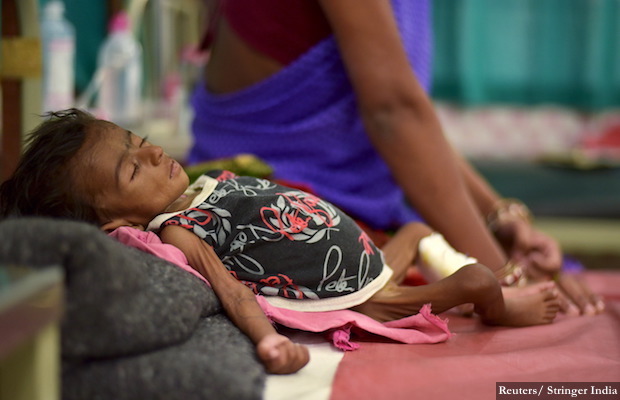 Countries with high rates of stunting are likely to be less prosperous, according to a recent report. Six of 10 Indian states with the highest rates of stunting are among India’s poorest 10 states by per capita income, and only four of 10 Indian states with the lowest stunting rates figure among India’s richest 10 states, according to an IndiaSpend analysis of national health and economic data.

“Stunting is a proxy for overall cognitive and physical underdevelopment,” according to Stories Behind The Data, a September 2017 report published by the Bill and Melinda Gates Foundation. “Stunted children will be less healthy and productive for the rest of their lives, and countries with high rates of stunting will be less prosperous.”

Stunting is the percentage of children aged 0-59 months whose height for age is below minus two standard deviations from the median of the World Health Organization’s Child Growth Standards. It reflects chronic undernutrition.

India has the highest population of children stunted (low height for age) due to malnutrition, at 48.2 million. In 2015-16, 38.4% of Indian children below the age of five were stunted, according to National Family Health Survey data.

“The first 1,000 days of a child's life (from the start of the pregnancy to two years after birth) are absolutely critical,” Alok Ranjan, Country Lead--Nutrition, India Office, Bill & Melinda Gates Foundation told IndiaSpend. “Adequate nutrition within this period is a must for enabling the child to achieve his or her full cognitive potential, a healthy immune system, and in future, a productive work-life. The effects of stunting are largely irreversible, and therefore it must be prevented for every child.”

A 1% loss in adult height due to childhood stunting is associated with a 1.4% loss in economic productivity and stunted children earn 20% less as adults compared to non-stunted individuals, IndiaSpend reported in July 2016.

In 2015-16, Bihar and Uttar Pradesh had India’s highest stunting rates, and they were also the poorest, according to data from the Economic Survey 2016-17.

Gujarat, which has India’s seventh highest stunting rate (38.5%), is the country’s tenth richest by per capita income.

Four of India’s 10 richest states--Goa, Kerala, Tamil Nadu and Telangana--rank among the 10 states with the lowest stunting rates.

“While economic growth plays an important role, there are other important factors also that need to be addressed, in order to reduce stunting among children under five,” Ranjan said. “For instance, ensure adequate levels of maternal and child health services; focus on educating the girl child--keeping girls in school, thereby preventing early marriages among girls and hence preventing early pregnancies; quality coverage of family planning services; provide access and ensure utilisation of water and sanitation facilities; and strengthen food systems.”

Infant and young child feeding practices, particularly non-exclusive breastfeeding, contribute to stunting, according to this 2014 report by the World Health Organisation.

Among the top five states with the lowest stunting rates, Tripura had the highest breastfeeding rate, with 71% of children below six months being exclusively breastfed. Karnataka, one of the richer states, saw a fall in the percentage of children under six months who were breastfed, from 58.6% in 2005-06 to 54.2% in 2015-16.

Uttar Pradesh had a breastfeeding rate of 42%. Seven of the 10 districts nationwide with the lowest rates of exclusive breastfeeding are in Uttar Pradesh, according to a July 2017 POSHAN report, an initiative led by the International Food Policy Research Institute.

(Nair is an intern with IndiaSpend.)