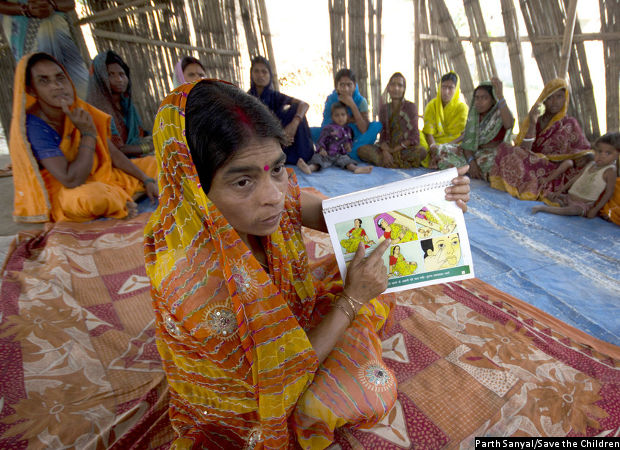 There was an estimated 23% decline in stunted children and 35% reduction in underweight children below the age of five, over eight years, according to a new report.

The healthiest children in India were found in states that provide the best maternal healthcare, reveals an IndiaSpend analysis of data from the India Health Report for Nutrition Security in India, 2015, released earlier this month by the Public Health Foundation of India (PHFI), and four rounds of government surveys over 20 years.

India is still home to the largest number of undernourished children: over 40 million stunted (below normal height for the age) and 17 million wasted (underweight and short) children.

In the first of this three-part series, we saw that increased public spending helped reduce the percentage of undernourished children.

A reason why the facilities were improved was to meet the Millennium Development Goal (MDG) of reducing maternal mortality ratio (MMR) to 109 per 100,000 live births by 2015.

Janani Suraksha Yojana (JSY), launched in 2005, is a centrally sponsored scheme being implemented to reduce maternal and infant mortality, by promoting institutional deliveries. JSY beneficiaries have increased from 0.74 million in 2005-06 to 10.4 million in 2014-15.

The state of delivery care has improved over the years, contributing to decreasing maternal mortality.

An IndiaSpend analysis had reported how the implementation of JSY has reduced maternal deaths in Uttarakhand, Uttar Pradesh and Assam.

Why India needs mothers to be healthier, fitter--and older

India is home to a third of the world’s population of women who are married before 18 years of age.

IndiaSpend has reported how cultural practices such as child marriages have affected maternal and child health.

But data show a decline in child marriage in the past two decades.

Besides lowering the risks during child birth, programmes like JSY have also improved maternal care.

Iron and Folic Acid (IFA) supplements during pregnancy help fulfill the nutrition requirements of the mother and the developing foetus, and prevent anaemia.

In 2005-06, data show that 65% women received or bought the supplements, but only 22.3% consumed them. RSoC surveys report a decline in the number of women who received the tablets (31%), but consumption remained stable at 23.6%.

Further, there has also been an improvement in the percentage of pregnant women who received Tetanus Toxoid immunization, which is essential to prevent Maternal and Neonatal Tetanus (MNT).

Breastfeeding and how it helps infants have stronger immune systems

There has been an increased emphasis on breastfeeding for newborns to improve nutrition.

Optimal breastfeeding in the first year and complementary feeding practices together can prevent almost one-fifth of deaths in children under five years of age, according to a UNICEF study.

The study also noted that colostrum, the rich milk produced by the mother during the first few days after delivery, provides essential nutrients as well as antibodies, reducing the likelihood of death in the neo-natal period.

Data from NFHS-3 and RSoC reflect an upward trend in breastfeeding practices.

Overall maternal health in India has improved, which has led to the improvement of the overall nutrition levels of children. However, these improvements are not evenly spread across the country.

Kerala, the state with the lowest proportion of stunted children, had almost 99% institutional births even during 2005-06.

Among states with highest proportion of undernourished children, Jharkhand and Chhattisgarh have the worst infrastructure for institutional deliveries. IndiaSpend had earlier reported from rural Jharkhand where hospitals still lack staff and facilities for childbirth.

Uttar Pradesh, the state with the highest proportion of stunted children, is close to Jharkhand and Chhattisgarh when it come to institutional deliveries (at 62.1%), and only 4.3% pregnant women had access to Iron and Folic Acid supplements.

“With high prevalence of low maternal height, low body mass index and anaemia, India’s women are at great peril of having small babies and of remaining malnourished themselves,” the PHFI report said.