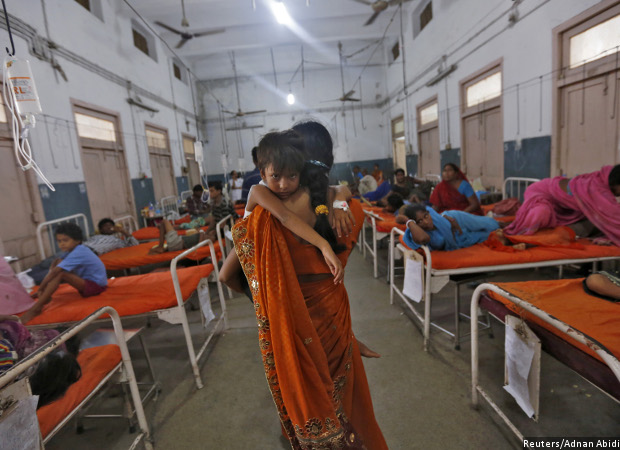 Amid criticism, central funding of national health programmes was cut 15% in the union health budget of 2015-16, but state health budgets--taken together--had already risen 21% the previous year, according to an IndiaSpend analysis of government data released in October 2015.

However, this increase is not uniform across states, indicating that states--especially smaller ones--unable to raise enough money are spending less on health and education. Exactly how many states spent to compensate for central spending cutbacks over the past year is unclear because that data will be available by the end of 2016.

In anticipation of the transfer of money to states--a process called devolution, proposed in December 2014 by the 14th Finance Commission--Delhi had increased payments to state plans during the 2014-15 budget: Transfers rose to more than double (by 108%) to Rs 2,59,855 crore ($43 billion) for the state plans, IndiaSpend had reported.

Many increases to states were substantial, particularly in key areas such as village development, education, health and agriculture. The idea, to quote from a government document, was to “provide greater ownership to State Governments in implementation of plans schemes and avoid thin spreading of resources, model of restructured centrally sponsored schemes (CSSs) continues. Higher allocation under State/UT (union territory) plan is reflective of this”.

Between 2014-15 and 2015-16, unconditional transfers of tax revenues--or “untied" funds, to use official jargon--rose 55%, from Rs.3.38 lakh crore to Rs. 5.24 lakh crore, according to the budget's revised estimates (RE), released in October 2015 (The budget is prepared using income estimates, typically revised after six months to account for actual tax received).

Although 18 states with poor health indicators--called "high-focus states"--increased health spending in anticipation of central cutbacks, our analysis reveals how smaller states have cut health spending because they did not have the money.

Jharkhand and Odisha increased their health spending by 80% and 73% respectively between 2013-14 and 2014-15. Some states saw marginal increases; Tripura and Manipur, cut health spending.

“The country is close to completing its first budget cycle since the implementation of the FFC (14th Finance Commission) recommendations; any rigorous assessment of the real impact of these recommendations is difficult owing to large gaps in available data,” said this report from the Accountability Initiative, a Delhi-based think tank.