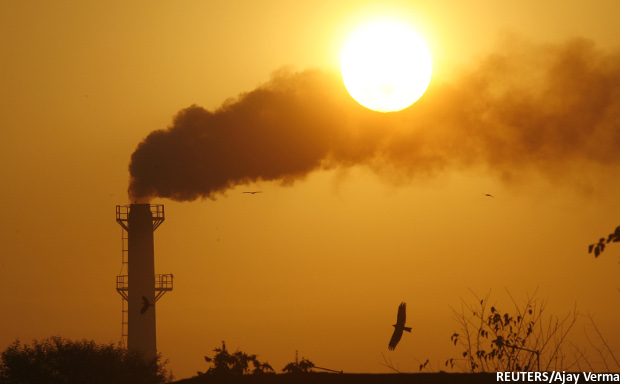 The Maharashtra Pollution Control Board (MPCB) launched a new Star Rating Programme for air pollution on June 5, 2017--World Environment Day. The programme uses smoke-stack emissions data that MPCB is already collecting. But, since sampling results are not very comprehensible to the general public, MPCB is turning these pollution readings into an easy-to-understand Star Rating.

Under the new scheme, industries are rated based on the density of fine particulate pollution coming from their smoke stacks. The best performing industries receive five stars. Those with the highest density of emissions receive only one star. Industry, government and the public can then log onto the MPCB website to access the report cards for plants in their area.

India is making headway to ambitious goals for clean energy, such as solar and wind power. Between 2017 and 2040, India will account for 15% of the estimated $10.2 trillion global investment in power generation. As these technologies get better and cheaper, the costs of going green have fallen. Earlier this year, the cost of solar power (Rs 2.62/kWh) fell below the market price for coal-generated power by the National Thermal Power Corporation, India’s largest power utility (Rs. 3.2/kWh), as The Guardian reported on May 10, 2017. The cost of solar energy could drop a further 66% by 2040 over current costs, according to the Bloomberg New Energy Outlook 2017 report. Yet, progress in technology alone will not be enough for industry to take up cleaner growth.

Maharashtra knows the benefits and the by-products of growth. For instance, the heavy industry centre of Chandrapur is ranked the most polluted city in India as of 2016 with an air-quality index (AQI) of 824. The MPCB regulates industries in Maharashtra and requires advanced control technology. What more can be done to bring this pollution down? In an area as thick with cement, power, and other heavy industries as Chandrapur, it is hard for the public to know the answer to this question.

The Maharashtra Star Rating Programme is the first government-led initiative in India that makes data available from approximately 20,000 industrial stack samples over multiple years. An easy and accessible way to inform residents of Maharashtra about the industry emissions around where they live and work, the programme has the added benefit of infusing transparency and accountability into the system.

Such transparency can bring about change in two possible ways. First, by making citizens more informed about the sources of pollution in their communities, citizens can then call for action. And second, by giving industries information on their pollution emissions, they may discover inefficiencies in their system and opportunities for improvements such as installing new technologies.

It could also instil some healthy competition. There’s a growing literature in behavioural economics (here, here and here) that suggests that knowing what your peers are doing can be an important source of change. So, industries may see how their performance compares to others and be motivated to improve. Along the way, they could also learn from each other’s success.

Since the MPCB already collects high-quality data on industrial air pollution emissions on a regular basis, the programme has practically no cost with possibly limitless returns. This innovative policy effort builds on successful technology efforts MPCB has created and championed, such as the mandating of Continuous Emissions Monitoring Systems (CEMS) for high pollution potential industries. In providing access to real-time pollution data, CEMS—like the Star Rating Programme—encourages self-regulation by improving data transparency and quality of information.

The Star Rating scheme is a new kind of regulation in India. It sets ambitious targets for industries, aside from only heaping on penalties. It also informs the broader public to encourage calls for action.

Similar programmes have launched before, such as the Program for Pollution Control Evaluation and Rating (PROPER) in Indonesia, the United States Toxic Release Inventory (TRI), India Centre for Science and Environment Green Rating Programme and AKOBEN in Ghana for rating the environmental performance of industries in the mining sector. However, the Maharashtra Star Rating Programme will be the first ever programme released by a government regulator to provide industry ratings across sectors on particulate matter emissions.

A coalition of researchers from J-PAL South Asia, the Energy Policy Institute at the University of Chicago (EPIC), and Evidence for Policy Design (EPoD) at Harvard Kennedy School will assist the state government in evaluating this programme and tracking its success, which ultimately relies on how industries respond to this information being made public. The effort has the potential to become a global model for how star-rating schemes can function successfully.

(Greenstone is the Milton Friedman Professor in Economics, the College, and the Harris School, as well as the Director of the Energy Policy Institute at University of Chicago (EPIC). Pande is the Mohammed Kamal Professor of Public Policy and co-director of Evidence for Policy Design (EPoD) at Harvard Kennedy School. Ryan is Assistant Professor of Economics at Yale University, and Sudarshan is India Director for EPIC.)