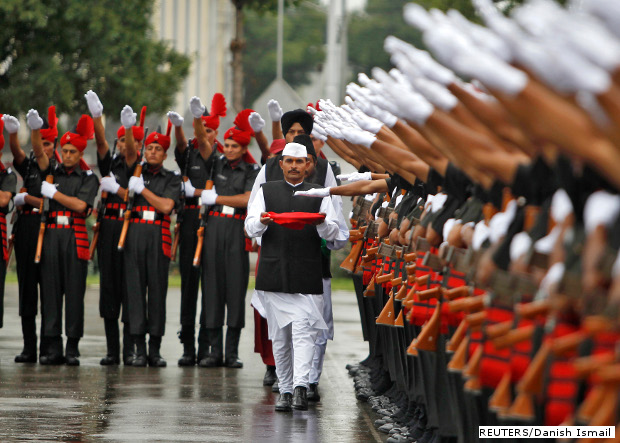 The defence budget of India—the world’s largest arms importer—has more than doubled over the past decade from Rs 80,500 crore to Rs 229,000 crore for the financial year 2014-15.

Yet, the defence forces are critically short of arms, and men and women at arms.

--The Indian Air Force (IAF) is short of 272-306 fighter aircraft (as this IndiaSpend report explains) and 56 medium transport aircraft.

The three defence wings also collectively need more than 1,000 helicopters. This is an indicative list: The actual list of defence requirements and shortages is longer.

Yet, the Ministry of Defence ­accounts for the second-highest share of India's budget, after the finance ministry.

“The requirement of funds (for defence purchases) is directly related to carried-forward committed liabilities and signing of new contracts,” Cowshish said in an email interview with IndiaSpend. As a result, the forces could expect a similar increase in the 2015-16 budget “if – and this now seems to be a big if – new projects, such as the one for a new combat aircraft, go through”.

Let us now look at sector-wise allocations of the defence budget.

Last year’s budget earmarked Rs 1,000 crore for the one-rank-one-pension scheme for ex-servicemen. This might grow to an estimated Rs 8,000 crore this year, as the Times of India reported.

More than two million ex-servicemen in India have been demanding one-rank-one-pension, which ensures that the same pension is paid to personnel who have retired in the same rank with the same length of service, irrespective of retirement date.

Investing in defence research and development (R&D) is expected to boost India’s indigenous arms industry and reduce its dependence on imports. The Indian government spent 42.7% of defence capital expenditure on arms imports in 2013-2014, according to data tabled in the Lok Sabha.

As we mentioned before, India is the world’s largest importer of arms as per Stockholm International Peace Research Institute (SIPRI), an independent international institute that researches conflicts, armaments, arms control and disarmament.