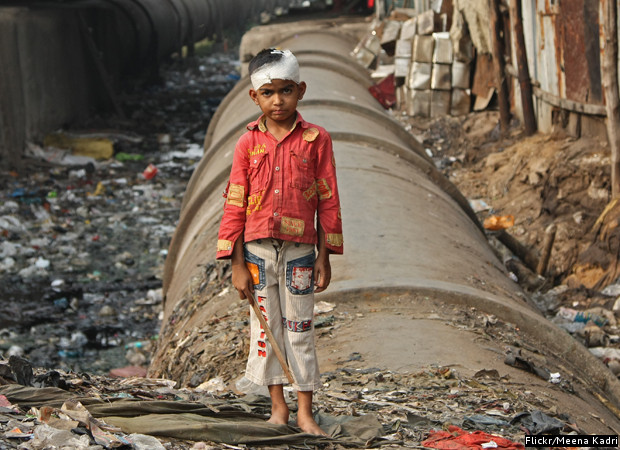 IndiaSpend has compiled data from various sources to evolve a picture of what it means to be a child from a poor, urban family—or without a family. Officially, a person who lives on less than Rs 47 a day is counted as poor. Part one today focuses on health, homelessness and substance abuse, while Part two next week explores education, crime and child labour.

One of the sources used is a new report Forgotten Voices—The World of Urban Children in India released this week by PricewaterhouseCoopers (PwC), a consultancy, and Save The Children, an advocacy. We have also added in data from, among others, the Census, the National Urban Health Mission (NUHM), the National Sample Survey Organisation (NSSO), the National Commission for the Protection of Child Rights (NCPRCR) and the National Crime Records Bureau (NCRB).

The picture that emerges of poor, urban children is that they are among India's most disadvantaged people. In many respects, they are worse off than those in rural areas, with indications that they may never be a part of what is called India's demographic dividend—economic growth driven by 472 million below 18 years of age, the largest number of young people in the world.

Of 377 million Indians, 32% are children below 18 years of age, and more than eight million children under six years live in approximately 49,000 slums, according to the PwC report, which quotes census data.

There are many more than these who live in poverty but are not counted as officially poor because they may live on more than Rs 47 per day. Between 15 and 18 million children lived in slums, according to UNICEF, in 1992. Clearly, poor, urban children are under-counted.

The 49,000 slums the report refers to are those that are officially counted and recognised, or "notified". There are thousands more uncounted slums with unknown numbers of children. There are 13.7 million slum households, according to census 2011.

Urban children, especially those from disadvantaged sections, are susceptible to ill-health, poor access to water and sanitation, insufficient education, urban disasters and lack of protection, noted the PwC and Save Our Children report.

As distress grows in rural India, still home to 833 million people, India's urban areas are witnessing a population explosion. The urban population added 91 million people—more than the populations of Germany or Egypt—in the decade ending in 2011 and grew 2.5 times faster than in rural areas.

Of those families that are migrants, the overwhelming majority begins life on the streets, move into slums and then—if they succeed—work their way up. It is a difficult life, and those most vulnerable are children.

The mortality rate for poor children under five is 72.7 (those who die for every 1,000 born alive). That is the same as the Gambia, Laos and Haiti, three of the world's poorest countries and higher than the urban average of 51.9 (although lower than the rural average of 82).

"Poor environmental conditions in the slums along with high population density makes them vulnerable to lung diseases like asthma, tuberculosis etc. Slums also have a high-incidence of vector-borne diseases and cases of malaria among the urban poor are twice as high as other urbanites," the report said.

These concerns and the urban population explosion prompted the launch of the National Urban Health Mission in 2013.

The latest health data show that rural populations are healthier than urban, as IndiaSpend previously reported, and that proportionally more urban children are ailing, according to this NSSO report. “Ailing” is defined as someone who suffers from an illness that can be treated in less than a month.

Migration, the leading reason for homelessness

Among children who lived on the street, 52% did so because their families had migrated, followed by 14.5% who had come to the city in search of jobs and money, according to this study, conducted by Save the Children and the Department of International Development (government of UK) in the cities of Hyderabad, Kolkata, Bhubaneswar and Jaipur in 2013-14.

Prevalence of Homeless Children (Under 18)

Children living on the street

Children working on the street

Source: Save The Children

Most homeless children lived under a roof (46.3%)—in pipes, under tarpaulins, and flyovers, in places of worship and anything else that qualified as a roof—followed by those who lived in the open (32%).

As many as 54.5% of homeless children reported sexual abuse, with 66% of boys and 67% of girls. Substance abuse was a widespread problem, with children reporting addictions to a range of substances, from glue-sniffing to hard drugs.

One in three children living on the streets admitted to substance abuse, according to a study conducted by the National Commission for Protection of Child Rights in 2013.

More than 83% these children reported a tobacco habit, followed by 68% who drank alcohol and 36% who smoked cannabis, said the report, carried out in 27 states and two union territories across 135 sites in cities and towns, with 4,024 respondents.

% of Respondents Reporting Use

Frequency of use (days in a month)

“Children in urban areas are often better off than their rural counterparts. This is a result of high standards of health, protection, education and sanitation," noted a 2012 UNICEF report. "But urban advances have been uneven. Millions of children in a marginalised setting confront daily challenges and deprivations of their rights.” ¦