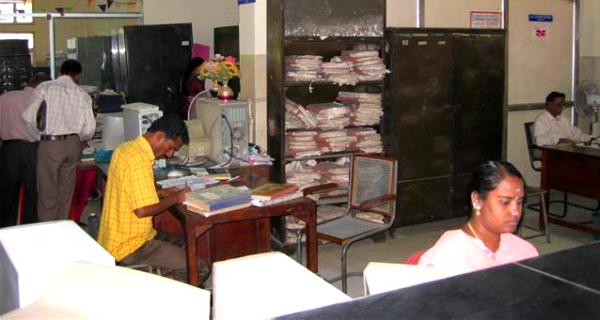 * Railways, Home and Defence Ministries have the highest salary expenditure

There is some good, bad and interesting news about Central Government staffers. We are not sure we know which is which but let’s begin with the interesting bit.

If the figures for overtime allowances don’t reflect any arrears, it would seem Government staffers worked a lot more last year than ever before - as overtime allowance shot up from Rs 880 crore in 2009-10 to Rs 1,200 crore.

Now the Rs 3,64,613 crore excludes incentives, which amounted to Rs 25,697 crore in the same period. Railways, Home and Defence Ministries had the highest salary expenditure. All ministries saw a drop in 'basic’ or base pay after the implementation of the Sixth Pay Commission.

Here is a look at the total number of central government employees and the total remuneration they received over the last few years: 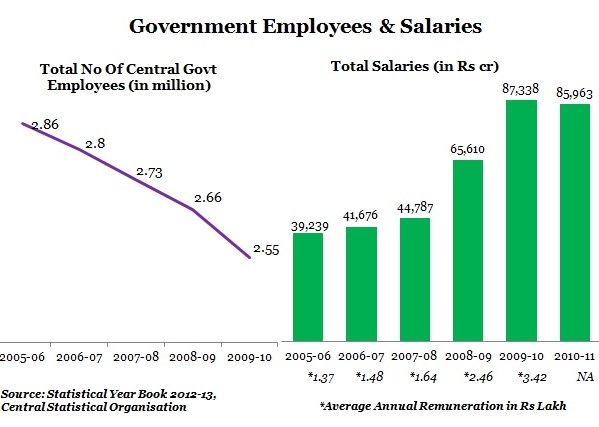 Incidentally, the total number of employees came down from 2.7 million in 2007-08 to 2.5 million in 2009-10 but total salary expenditure increased by Rs 21,728 crore and average remuneration more than doubled to Rs 3.4 lakh.

Figure 2 details the expenditure under various heads from 2005-2011: 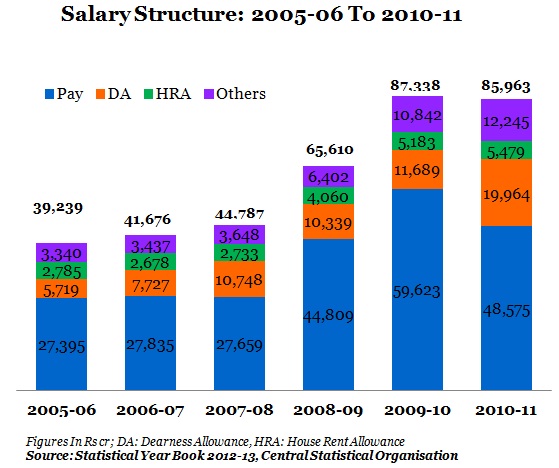 Next is Dearness Allowance (DA), which accounts for the rising cost of living. Government expenditure on DA increased to nearly Rs 20,000 crore in 2010-11 and Rs 66,186 crore over the period under review. House Rent Allowance and Overtime Allowance accounted for Rs 22,918 crore and Rs 5,427 crore, respectively. Incentives and perks (travel allowance etc) increased to Rs 25,697 crore.

So which Ministries/Departments have the highest salary bill? The following table lists the top 10 ministries: 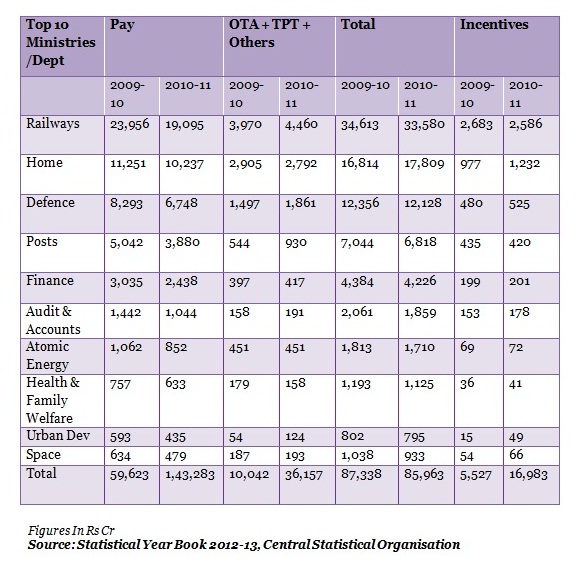 The Indian Railways had a total number of 1.3 million employees in 2010-11. The Ministry of Home Affairs and Defence also have a huge employee base. Ditto with Posts. From Table 1, it can be seen that the base pay of the top 10 ministries had declined in 2010-11.

So, it’s a bit of a mixed bag of good, bad and interesting news when it comes to payroll statistics of the Government of India. Measuring performance of the same staffers – like output and productivity - would of course take a different set of metrics. And that’s another story as well.