Should We Go MAD Over CAD? 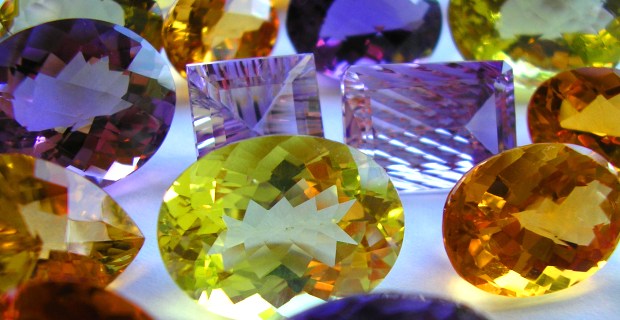 * Exports of petroleum products, gems and jewellery and transport equipment are going up

* Gold demand may soften for two reasons: festival season is over and duty hike may be a dampener in the short term

India faces a swelling import bill, thanks to a rising demand for oil and a craze for gold. That in itself is not a problem except that the economy has slowed sharply and exports are lower than a year ago. Put another way; India’s foreign exchange earnings from exporting goods & services and other sources like remittances are not sufficient to cover outflows.

Actually, inflows are not even enough to pay for imports of the same quarter. This gap between inflows and outflows has meant that India has to grapple with a large current account deficit (CAD). Now, there is much debate about how bad it’s going to get and what could happen if the CAD figure spirals out of control. But trade data that’s coming out suggest that the trend may be reversing. And the CAD problem may not be that serious after all….

Let’s look at the numbers. Remember that CAD rose to a historical high of 6.7% of GDP for the October-December quarter of 2012-13 amid continuing deterioration of balance of trade, thanks primarily to rising crude oil and gold imports. It may be recalled that CAD had risen to 5.4% of GDP in the second quarter ended September 2012.

While the deficit will continue to be a worry for policy makers, the Government and its economic advisors (perhaps predictably) feel the worst is over. Prime Minister Manmohan Singh expressed hope that CAD would be around 5% of GDP in 2012-13.

Others are hopeful too. The Finance Ministry, feels the deficit would be lower in the last quarter of fiscal 2012-13. The only solace at the moment is that CAD is fully financed by inflow of foreign capital, and India’s foreign exchange reserves have not been drawn down.

So the big question is: Will CAD narrow in the fourth quarter and in the new financial year? Now, the Finance Ministry said in a statement: “If the current trend of improvement in exports and steadiness in imports persists, CAD is likely to moderate from here.” Moderation in the new financial year is to be expected as the Government intends to spell out various measures to boost exports in the annual supplement to the foreign trade policy later this month.

Now let’s break it down further. The largest component of CAD is the trade deficit. So let us examine how external trade is performing. Data available for January and February suggests that the trade deficit in the fourth quarter may print lower than the previous quarter and may be contained at $50 billion. 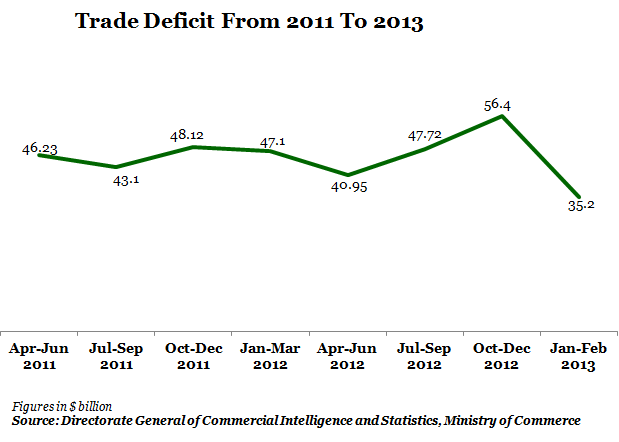 India’s trade deficit had widened during the year as exports declined and imports rose. But over the past three months, there has been a modest pick-up in exports. Exports increased by more than 4% in February from a year ago, its fastest monthly growth in a year. Imports, too, moderated that month to grow at its slowest pace in six months. 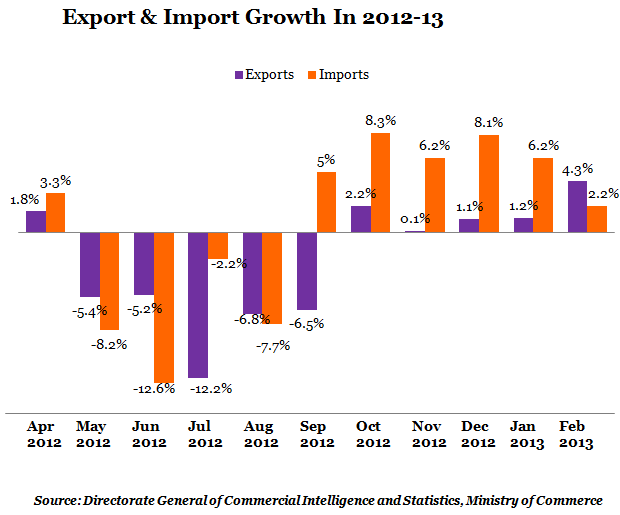 Will the improvement seen in February be sustained? Oil and gold imports, together, account for about 46% of the total import bill now. The monthly import bill for petroleum has been about $15 billion in the past few months. The value of petroleum imports is unlikely to contract much unless there is a sharp fall in oil prices in the global market. Measures to cap subsidy on diesel and liquefied petroleum gas may also not reduce demand.

On the other hand, some contraction can be expected in gold imports in March given the increase in import duties and build up of inventory in anticipation of the duty hike. 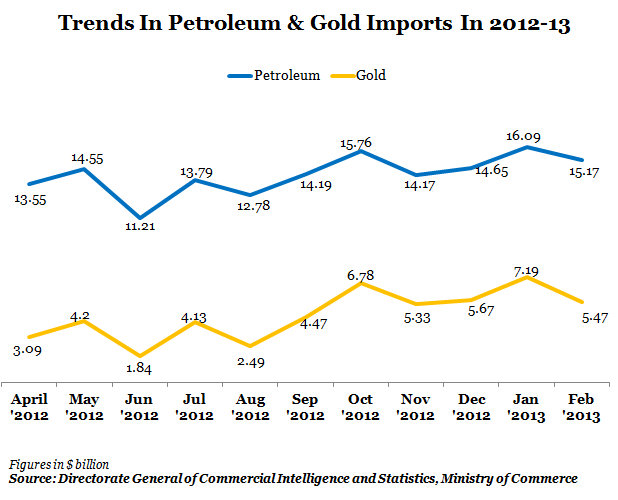 On the export side, a pick-up in demand for gems and jewellery as well as transport equipment in February helped shore up earnings. Petroleum product exports also held steady during the month, and recorded good gains from a year ago. Petroleum products, gems and jewellery and transport equipment together account for 40% of the export earnings currently. 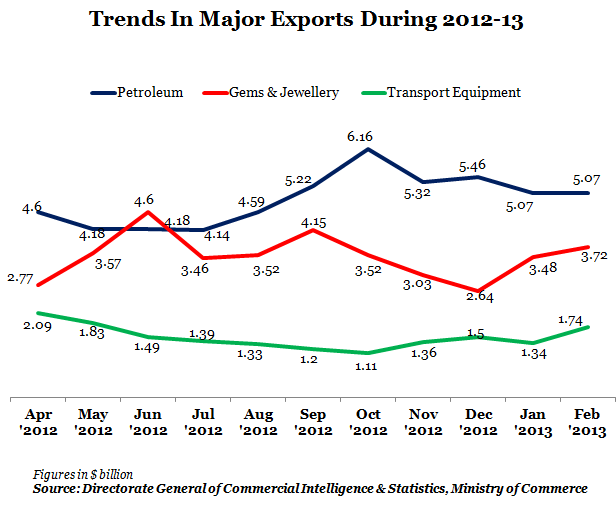 We must remember that all the factors are not in our control. In general, any improvement in external trade depends on the global economic recovery. But the Organisation for Economic Co-operation and Development (OECD) said recently that outlook for growth has improved in many countries. The US, Japan and China are among those experiencing rebound in the first half of the calendar year. All three are important destinations for Indian exports, and accelerated growth in these economies augurs well for India’s trade. 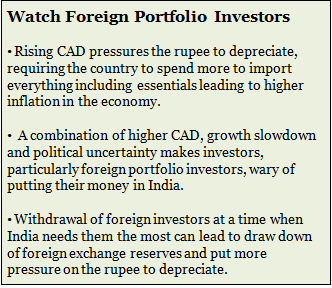 A recovery in growth could result in investors diversifying away from gold as an asset class. Gold demand may also soften temporarily for two reasons: the festival season is over and the duty hike may be a dampener in the short term.

The direction of petroleum prices is more difficult to predict as it is not determined by demand and supply alone. Any deterioration of the geo-political environment, particularly tensions in West Asia, can reverse the easing of oil prices seen in the recent weeks. For the moment, there is no such worry beyond the situation in Syria. And so, the Finance Ministry may be right to say the worst is over, at least in the near term. And thus, it might be worth not going mad over CAD, at least for now.