Security Situation Worsens In J&K; Security Forces Toll Up 82% Over 2015, Worst In 4 Years 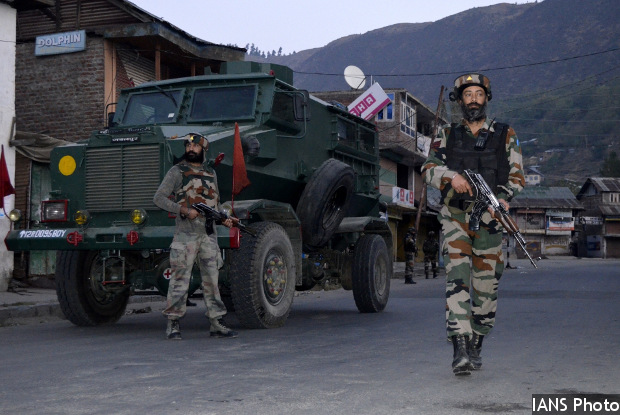 Armed force personnel in action during an encounter with terrorists at 46 Rashtriya Rifles camp in Baramulla, Kashmir on October 3, 2016. The number of security personnel killed in Jammu & Kashmir has increased 82% since 2015 while injuries among security personnel doubled since last year.

As many as 71 Indian security forces personnel have been killed this year by terrorists in Jammu and Kashmir (J&K), as of November 27, 2016, up 34% since 2013, when 53 were killed, and the the worst in four years, according to data tabled by the home ministry in the Lok Sabha (lower house of Parliament).

The data indicate that while the security situation deteriorated in J&K over 2016, it improved in the north-east and in parts of India plagued by left-wing terrorists.

Civilian deaths in terrorist strikes declined 18%, while injuries are down 13% from 2015.

As many as 140 terrorists were killed by security forces in 2016, more than the total killed over three years, as the Economic Times reported on December 6, 2016.

This does not include the Hizbul Mujahideen terrorist killed in an encounter with security forces in Bijbehara, Anantnag (J&K) on December 14, 2016.

The increase in deaths of security forces and terrorists since 2015 indicates that terrorist activities have increased this year in J&K, IndiaSpend reported on November 25, 2016.

This possible strategy by terrorists could be an effort not to antagonise local Kashmiris but rather capitalise on the wider discord among them against security forces in a year that has witnessed over 100 days of curfew in J&K and an overall deteriorating security situation.

Violent protests erupted after security forces gunned down terrorist leader Burhan Wani on July 8, 2016. More than 90 people died in protests and hundreds were blinded by pellet guns used by police and paramilitary forces.

42% increase in Pak ceasefire violations along Line of Control

As many as 216 ceasefire violations by Pakistan were reported along the portion of the de facto border, the Line of Control (LoC), overseen by the Army in J&K until November 26, 2016--a 42% increase from 152 incidents recorded last year--according to data released by the home ministry in the Lok Sabha. 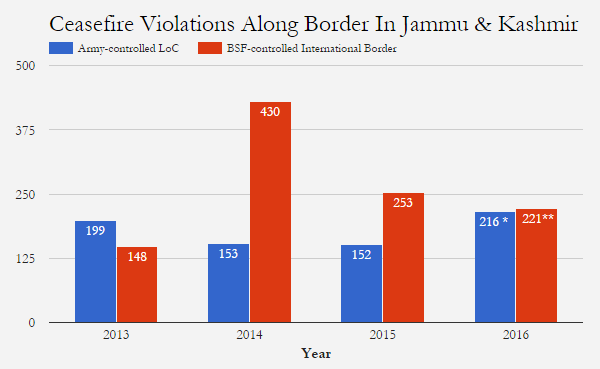 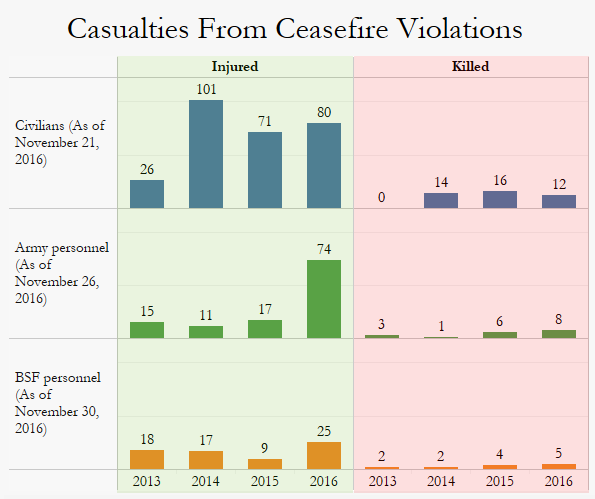 Violence in the northeast declines

As many as 63 Indian security personnel were killed in attacks by terrorists--a 7% increase since 2015 when 59 were killed.