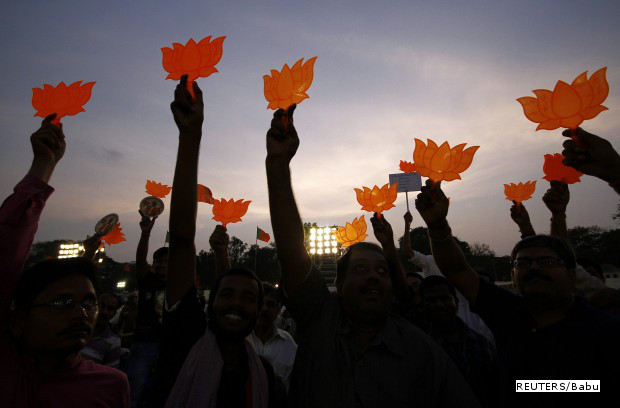 While Prime Minister Narendra Modi, through 2014, has clearly pulled in extra voters--and these make all the difference to winning--a series of state election results indicates that the party's core voter base has stayed loyal over a decade of Congress rule.

If the Bharatiya Janata Party (BJP) forms the government in poverty-stricken Jharkhand, it will control eight of 29 Indian states, up from the first two--Madhya Pradesh and Rajasthan--it ever won in 1990.

The Congress, which fell to its lowest tally ever in parliamentary elections, still controls nine states. But five of Congress-ruled states are among the smallest in India. Except for Karnataka, Kerala, Uttarakhand and Himachal Pradesh, the rest are in India's northeast.

The states dominated by the BJP now account for more than 366 million people, while the Congress, which in the 1950-51 elections ruled every Indian state, accounts for around 150 million in the nine states it rules today. The BJP's vote shares vary from 28% in Maharashtra to 48% in Gujarat, indicating strong support but also strong opposition from voters opposed to the party.

The slow hold on national power

In the first national election it contested, in 1984, the BJP won only two seats, with a vote share of 7.7%. The seat share of the party has increased gradually over the years. India is a multi-party democracy, where the party with the highest votes wins the election, although it may not have a majority of the votes.

This is called the first-past-the-post system, and its anomalies can be seen in the BJP’s vote share over the years, as the table below indicates. In 1989, the BJP's vote share increased by 83, but its vote share rose only by 3.6%.

Now, with a clear majority in the Lok Sabha, the BJP has a vote share of 31.3%. A polarisation of the vote bank appears apparent. In the Indian system, a party can win by pulling in a few thousand extra voters in each constituency. The BJP has done that, but it has also kept its core voters loyal. This is apparent from its regular recent victories in the states.

The BJP contested its first national election four years after its formation, morphing from the Jana Sangh, which broke away from the Janata Party.

It took 12 years to become strong enough to give India a prime minister, Atal Behari Vajpayee, in 1996. The party could not prove its majority in the Lok Sabha, and the government collapsed in 13 days.

But the BJP had a strong hold in a number of states by the 1990s, paving the way for Modi's dominance today.

The Congress started losing its hold in the states from 1967. Regional parties began to rise in the states, but the centre was still ruled by the Congress. The first non-Congress government at the Centre did not come before 1977 when the fragmented, fractious Janata government came into power. It is only the BJP that has ever really challenged Congress dominance.