Sarla Devi, The Child Brides Of Sitapur And The End Of Education

Sitapur, Uttar Pradesh: Vats with food bubbled near Sarla Devi’s mud house, as some of 200 visitors invited for her wedding streamed in. Near mud pots painted in white--part of a local ritual to offer food to the gods--sat Sarla Devi, possibly not yet 16 and a fifth-class dropout who was preparing to join the ranks of a third of Sitapur’s girls who become child brides. 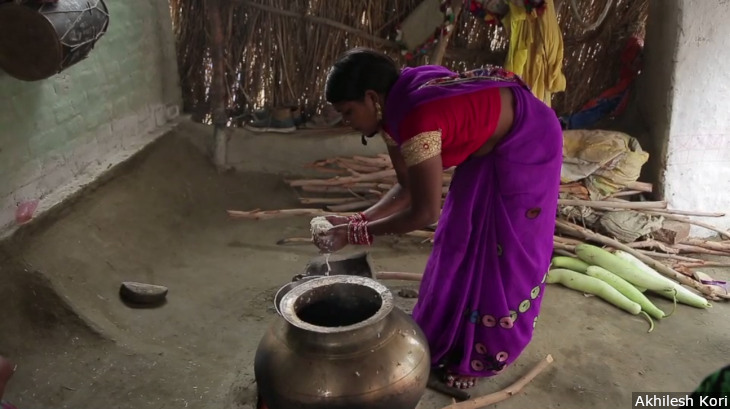 Outside Sarla Devi’s house in Uttar Pradesh’s Sitapur district--where 35.5% of women aged 20-24 were married before turning 18--preparations are on for her wedding.

Here in the village of Deokali, 90 km north of state capital Lucknow, Sarla Devi was not aware she may have been violating the law. Perhaps she was not. She reckoned she may have been 17 or 18, but she had no document to prove her age or identity.

The proportion of Sitapur women aged 20-24 who were married before turning 18 was 35.5% in 2016, above India’s average of 26.8% and Uttar Pradesh’s 21.2%, which ranks sixth from the bottom in state rankings on the subject. Nearly half (42%) of 700 million child brides in the world live in South Asia, and of these one in three are in India, according to a 2015 report from The United Nations Children's Fund (UNICEF). Sitapur is classified a “high priority district”, one of 19 across Uttar Pradesh (UP) and 184 across India, identified for special attention to reduce child marriage and teenage pregnancy.

If Sarla Devi had made it to secondary school, she would be six times less likely to get married. Retaining girls in school is recognised as the most effective way of preventing child marriage. Child brides are more at risk of early pregnancy, having more and underweight babies, dying early and slowing overall economic progress, according to the UNICEF report we cited earlier.

As she prepared to marry 20-year-old Deepu Kumar from the neighbouring village of Talgaon, Sarla Devi said she had a vague memory of her mother, who died of cancer when she was only six or seven. Since her mother could no longer care for her family of six, Sarla Devi dropped out of school to help. Of Sitapur’s 800,000 households, only 2.9% have at least one member covered by a health programme.

It’s hard to say whether Sarla Devi’s fate would have been any different if her mother was alive.

Her mother married at 13, and as Sarla Devi joins that cycle of early marriage, so, too, in all probability will her younger sister.

“When I get married and go away, my younger sister will do all the work I did,” she said. One reason she agreed to marry was that it would, she hoped, bring her respite, however brief, from looking after the family--two younger siblings, father and her grandparents.

Sarla Devi’s situation has implications for her own life, for the lives of women like her and for India’s ambition of becoming a $5-trillion economy by 2025 from $2.61 trillion today.

Holding back Indian women and India

At a time when India’s workforce has fewer women than it did six years ago--no more than 18% in rural areas are employed, compared to 25% in 2011-12 and 14% in urban from 15%--experts explained how child marriage affects women and the economy.

“Child marriages debilitate both sexes, but especially the girl,” said Bina Aggarwal, a professor of development economics at the University of Manchester in the UK and a winner of the Padma Shri, India’s fourth-highest national award.

A child bride is vulnerable in marriage, cannot make an informed choice about a partner, finish school, claim parental property rights or “function as a full citizen”, said Aggarwal.

“Early pregnancy will damage her health and that of the baby and undermine her capabilities as a mother,” said Aggarwal. “Without proper education, she will likely end up unskilled and jobless, and add to the growing proportion of women who want to work but find none.”

For the country, this means a serious waste of talent and productive workers. Given the vast numbers of child marriages, the potential economic loss to India is thus enormous.”

As Sarla Devi waited for her friends at her wedding, she told IndiaSpend that none of them was in school, as was the case with 83.6% of Sitapur’s girls, who do not attend secondary school.

Girls who have received a secondary education are up to six times less likely to marry than girls with little to no education, and continued access to quality education is critical in protecting girls from the consequences of child marriage, said a 2014 report from the United Nations Population Fund.

These findings come to life through the lives of young women in Sitapur.

Why child marriage is high in Sitapur

Sitapur district is the eighth-most populated district in UP and ranks 59th of 75 districts by literacy, with 61% literate, lower than the state average of 67.7%, according to Census 2011.

Child marriage is pervasive in communities where birth and death rates are high and access to education and healthcare is low, according to a 2015 report by Nirantar Trust, an advocacy, which also found richer women were more likely to marry more than four years later than poorer counterparts.

Ending child marriage could reduce the national fertility rate by an average of 11%, according to the International Centre for Research on Women, a global research organisation, which said girls married before 18 have an extended fertility span, which leads to premature and multiple pregnancies, higher maternal mortality, and higher infant mortality.

“Girls getting married at the age of 12-14 is a common phenomenon here,” said Komal Bhatu, Sitapur block coordinator for the adolescent health programme of the Population Foundation of India, a nonprofit. “The conditions are such that a girl is considered safe only when she is married. A girl child is worst affected by poverty or death in the family as she is weighed down with responsibilities and has to forgo her education.”

Early marriage also implies lower dowry for the girl’s family, said Bhatu. “People today know that girls getting married before 18 is punishable,” she said, “(but) this is intrinsic in the culture (and) people will still illicitly do such an act.”

These attitudes still prevail in large parts of India, where the rate of child marriage has declined, but not as fast as it should, said experts.

Of 644 districts in India, 330 districts have a higher incidence of child marriage than the national average. Of the top 10 districts with high incidence, seven are in Rajasthan, one in UP.

Source: National Commission for the Protection of Child Rights, 2017, Statistical Analysis of Child Marriage in India

India’s child-marriage rate is as bad as Guinea and Ethiopia, worse than Burkina Faso--all three African countries are poorer than India--and is sixth among 10 countries with the highest rates of child marriage.

Within India, six districts in UP have an incidence of child marriage that is more than double the national average of 26.8%. One of those districts is Sitapur.

Recording child marriages and taking legal action is difficult. Early marriages in the country are mostly unregistered and are not counted as part of any standard data collection system.

“Negligible data exist for marriages in the age group of 10-14,” said a 2001 UNICEF report on early marriages. That situation has not changed substantially since.

Most child marriages in UP are not recorded, the Comptroller and Auditor General of India (CAG), the government auditor, observed in a 2016 report, which revealed that UP had no cases of child marriage registered under the Child Marriage Restraint Act, 1976 in the years 2010-2011, 2011-12 and 2014-15.

In 2016, there were 326 reported cases of child marriage in India. Charge sheets were submitted in 236 of those cases, and 956 cases are still pending trial from previous years, according to 2016 National Crime Records Bureau data, the latest available, submitted to the Rajya Sabha on March 15, 2018. With only 35 convicted and 115 acquitted, the conviction rate is 14.7% and 93.4% of such cases await a judicial decision.

Back in Sitapur, Sarla Devi and her family and friends enthusiastically continued preparations for her marriage. It appeared the cycle of her life would perpetuate itself. Asked if she would educate her children, Sarla Devi appeared disinterested. “When I did not study,” she said, “what will I teach my children?”

(Ali is a reporter with IndiaSpend.)