‘Sanitation Workers Clean Our Cities, But They Are Denied Even Minimum Wage' 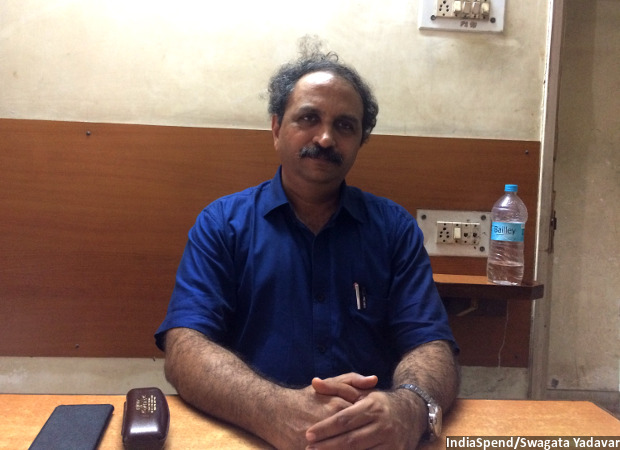 After a decade-long legal battle, the Supreme Court in April 2017 ruled that permanent jobs be given to 2,700 contract workers of the Brihanmumbai Municipal Corporation (BMC), India’s richest municipal corporation.

These contract workers, who sweep streets, collect garbage and clean sewers, were not entitled to health and other benefits, vacation, rest days and pension. They will now get back pay of two years and employee benefits, such as weekly offs and medical leave without a pay cut.

Milind Ranade, a textile engineer who is a general secretary of the Mumbai’s sanitation workers’ union--he got involved when he once saw workers eating lunch perched atop a pile of garbage, found they were on contract and not entitled to a lunch room--told IndiaSpend that the contract system was exploited by municipal corporations nationwide, encouraging exploitation, perpetuating poor working conditions and apathy towards the workers, who are usually Dalits.

Indeed, on July 12, 2017, 6,000 contract sweepers in Bangalore struck work on similar grounds. Paid Rs 5,000 a month with no sign of a promised hike, toilets and safety gear, they said they were treated like bonded labour, with passbooks and ATM cards confiscated by contractors, who are supposed to pay salaries directly into bank accounts. The government later promised that these workers would get regular jobs.

The Mumbai union, called Kachra Vahatuk Shramik Sangh (KVSS), first challenged the contract status of sanitation workers in a Mumbai industrial tribunal in 2007, but the BMC challenged the order in Bombay High Court. In December 2016, the High Court dismissed the BMC’s case. The BMC appealed to the Supreme Court and lost again.

Ranade was (and is) a member of a communist outfit called the Lal Nishan Party (Red Flag Party), when he and other colleagues formed the KVSS in 1997. Its first demand they had was that the BMC provide drinking water to contract workers. These workers did not have changing rooms or baths, which they particularly need because working with the city’s trash and filth makes them smell. Since then the union has succeeded in getting workers raincoats, boots, provident fund, medical leave, minimum wage (Rs 13,936 per month; 536 per day for Zone A which includes Mumbai, according to April 2017 notification), drinking-water taps and wash areas.

Ranade quit his job at a pharmaceutical company, Extrusion Processes, to launch the KVSS and works on a voluntary basis. His wife, Ashwini Ranade, is also a member of Lal Nishan Party but she is also a lecturer at Acharya Marathe College, supporting the family while Ranade continues his battles with the government.

Ranade spoke to IndiaSpend in trade union’s office at Shramik, Dadar, which serves as a party office for many trade unions in Mumbai.

How many workers are on temporary contracts in the BMC? What does the April 2017 Supreme Court verdict that 2,700 such workers get regular jobs mean for them?

So, there are 28,000 permanent workers in the BMC and 6,500 contractual workers. The Kachra Vahatuk Shramik Sangh is the biggest union among contractual workers with more than 5,000 contractual workers as members. There are four cases filed by us pending (in courts) for their permanency--to become permanent workers. First, we have to approach the labour commissioner, then the industrial tribunal, then the High Court and then the Supreme Court. Apart from this case of 2,700 workers which is settled, there is another case of 580 contractual workers pending in industrial tribunal, and two other cases of 1,300 workers and 1,100 workers. The first case which was filed in 1997 was settled in 2003 and 1,204 workers were made permanent. We went for an out-of-court settlement, even though we could have won it because it took 20 years, and at the end of the 20 years, the BMC would have to pay Rs 200 crore as compensation to the workers. So, for us, it was a matter of time; for the BMC, it was a matter of money. With the sanction of the government of Maharashtra, there was an out-of-court settlement. So, of 6,500 (workers on contract), 5,000 now have permanent jobs through the various cases.

BMC started hiring contract workers in the 1980s. They were meant to lift debris. The word ‘debris’ was used to camouflage the fact that they were lifting garbage, since debris is not the responsibility of the corporation, but lifting refuse and garbage is. So, these particular workers were removing debris from where? The dustbin. No one throws debris in a dustbin. They (BMC) defined debris as cow-dung, hospital waste, domestic waste, hotel waste, silt--essentially everything.

Under the garb of debris, these workers were doing BMC’s work. This was in the 1980s.

Then, after we won the case in 1999, the BMC stopped all the contract work, then they restarted it in 2004. This time they called it the Hyderabad pattern.

What is the Hyderabad pattern? Each contractor employs less than 20 workers. If you have 20 workers, all the labour laws are applicable. So, to get out the purview of the labour laws, they kept it at 18 workers.

In BMC, there are now more than 350 contractors, every employer using less than 20 workers. Now under the present Narendra Modi government, the limit has been raised to 50 in the name of ease of business. Anywhere in India, the safai (sanitation) work is done only by dalits, no other castes are willing to do this work. They will prefer to be unemployed than do this work.

In some places, you find Brahmins are permanent workers, but they are not actually doing it (sanitation work). The salary is Rs 21,000, he is paying a dalit to do the work at Rs 5,000, while is on paper the employee is marked ‘present’ and gets Rs 15,000, while Rs 1,000 is given for officials as dasturi (commision) to keep quiet.

So, all over India, workers who are working for sanitation department are dalits, that is there is 100% reservation, and no one has challenged this. No one asks why there aren’t Marathas, Thakurs or Kayasths (upper castes) working in this field.

Each state now uses contract workers for statutory (fulfilling core functions of the corporation) and perennial work. This means only dalits are becoming contract workers, but instead of getting permanent employment with some social security, they work with no job security or social security, without any protection of law… they are out of the purview of the law, so you do not need to give them provident fund, gratuity or anything else.

Everywhere in India, these dalit safai workers are getting less than minimum wage: Rajasthan, Madhya Pradesh, Delhi, Haryana, Gujarat, Maharashtra. This is called the Hyderabad pattern because it (the system) was invented in Hyderabad. Under this pattern, workers are called volunteers, a salary is termed honorarium. With every contractor, there are 80 workers, the contract is for seven months, so that you don’t complete 280 days. If you complete 280 days, you have some grounds to ask for permanency. So, you are kept from every benefit.

How many contract workers are there across India?

No one knows, but the numbers are in thousands. In Mumbai, there are 6,500, there are another 9,000 working in dattak vasti (slum areas where community organisations do the sanitation work), where they are not even counted as contract workers. In Thane, there are 2,000, in Navi Mumbai there are 6,000, and it (Navi Mumbai) is the only corporation without a single permanent safai worker. In Nashik there are 500, in Pune there are 500. In Kolhapur, 500 contract workers were paid 50% less than the minimum wage, and we had to fight for two years in the (Bombay) High Court and then they got arrears of minimum wage, which was Rs 3.7 crore, or Rs 1 lakh per worker.

In Thane, workers are not paid arrears of minimum wages for 24 months, so per worker the arrears are Rs 120,000. In Nagpur and Amravati also, they (contract workers) are not paid (minimum wages).

The worst thing is that for every set of workers, you have to go to the court; you have to start with the industrial tribunal and work your way up to the higher courts..

How do companies with contract workers manipulate the system so these workers are kept from regular jobs?

When we formed the union, all (contract) workers in Mumbai were paid Rs 2,000 less than minimum wage until 2005. So, 6,500 multiplied by Rs 2,000 is Rs 1.3 crore per month. This amount was siphoned by municipal officers and contractors. This is how the nexus was created. These are dalit workers, they have migrated from drought-prone areas, they live in jhuggi-jhopdis (slums), which are demolished every now and then, so they have no ration cards. These are most vulnerable workers and being dalits, they are the easiest to exploit. They don’t get social security--no boots, gloves or masks. Hundreds of workers have died on duty, but no one knows.

The BMC’s own study in 2015 revealed that 1,386 sanitation workers died in six years due to poor working conditions.

These figures doesn’t include contract workers, only permanent workers. Their life expectancy is shortened, many die between 40 and 55 years of age and among those who do the full length service, very few reach 70.

Have the lives of sanitation workers been affected in any way after the Swachh Bharat Abhiyan?

Yes, they are required to do more work. No one bothers whether they (sanitation workers) get full payment or not. If their provident fund is deposited in their accounts or if they get ESIS (Employee State Insurance Scheme). No one comes if there is an accident. Who is keeping Bharat swacch (clean)? The Prime Minister, who holds the broom for five minutes? Who is keeping India clean? Chief Ministers, MPs, film stars or cricketers?

All the laws, the guidelines, the acts are on the paper, but if you want to find out the reality, go to the labour commissioner’s office and ask, how many safai workers are there in Maharashtra and how many get minimum wage.