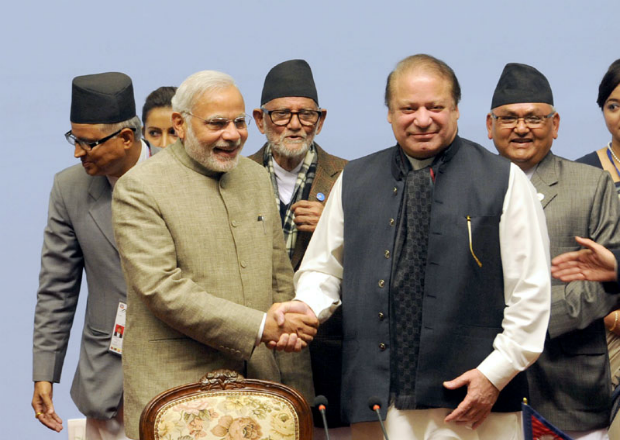 No major deals could be signed as Pakistan held back from signing two key pacts; Agreement for Regulation of Passenger and Cargo Vehicular Traffic and SAARC Regional Agreement on Railways. The only pact that was signed was SAARC Framework Agreement for Energy Cooperation (Electricity).The Kathmandu Declaration highlighted “deeper integration for peace and prosperity” among member states. Some of the key features of the declaration are mentioned in the BOX below.

In his speech addressing the regional leaders on 26th November, Modi emphasised economic cooperation and regional trade. He said: “Today, less than 5% of the region's global trade takes place (among ourselves). Even at this modest level, less than 10% of the region's internal trade takes place under the SAARC free trade area. Indian companies are investing billions abroad but less than one percent of that flows into our region.” Modi highlighted the role of free trade agreements between India and Sri Lanka which have strengthened relations between the neighbours.

Trade has played a key role in binding the SAARC nations together. In an effort to improve trade ties, the South Asian nations signed the South Asian Free Trade Area (SAFTA) in January 2004 during the 12th SAARC summit held in Islamabad, Pakistan. This primarily came as an initiative to transform the region into an economic union. The agreement came into force in January 2006, following which SAFTA Ministerial Council was formed comprising commerce ministers of the member states.

The Kathmandu Declaration reaffirmed their commitment to achieve South Asian Economic Union in a planned manner through a free trade area, a customs union, a common market, and a common economic and monetary union.

The total Free on Board (FOB) value of exports by member states under SAFTA has reached about $3 billion, or Rs. 18,600 crore (as on 20.09.2013) since launching the SAFTA trade liberalisation programme in July 2006.

India’s exports to Sri Lanka increased 13.82% in 2013-14 compared to the previous year’s decline of 9%. It is interesting to note that India’s leading export to Sri Lanka is aircraft and spacecraft components worth $930 million or Rs. 5,766 crore.

India’s imports from its neighbours are much lower compared to its exports, which clearly reflect its “big brother” role in the region.

Modi also emphasised developing infrastructure connectivity through rail and road networks. “Today, goods travel from one Punjab to the other Punjab through Delhi, Mumbai, Dubai and Karachi – making the journey eleven times longer and the cost four times more. I know that many of your goods, too, have to do a parikrama of India to reach their destinations. We must shrink the distance between our producers and consumers and use the most direct routes of trade.”

Trade among SAARC members may not be doing well due to tensions between the big two, India and Pakistan, stalling progress. The connectivity pact was an initiative towards strengthening trade relations among member states. The hope is that even a small improvement in trade will improve political relations and create a virtuous cycle that lifts every nation involved.