Rural India Leads Record 35% Surge In Use Of e-Governance

Rural India and Gujarat led a record 35% surge over a year in mobile-phone and computer-based transactions with the government, an indicator of demand and future potential in recreating India’s interaction with its government.

Hosted on mKisan—a portal that allows central and state government organisations to potentially connect over text messages with more than 80 million farm families—the video above indicates just one aspect of the increasingly evident presence of government with electronic devices, in particular mobile phones.

E-taal aggregates, in real-time (or live), e-transactions between Indians and 2,848 central and state organisations and departments across 29 services, including land records, agriculture, information, education, health, bill payments and agriculture. 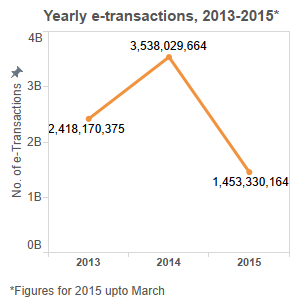 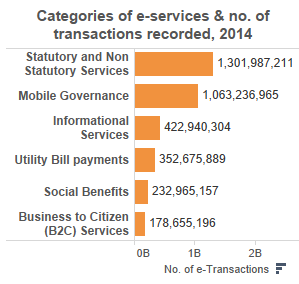 Use of these services does not imply that they work as they should. But they are a record of the desire for such interaction with the government.

An e-transaction is the delivery of any government service over electronic means, such as mobile phones or computers.

For example, a right-to-information query filed through the department of personnel and training (DoPT) website, www.rtionline.gov.in, or a farmer seeking weather advisories over text message, is recorded as an e-transaction.

Our analysis shows that Indians in rural areas particularly use e-services to seek weather advisories, obtain copies of land records, get crop prices and public-distribution system coupons for subsidised food.

This video from Uttar Pradesh, India’s most populous state, explains how farmers use these services:

Services offered in the agriculture sector were the most used e-service, with about 980 million transactions clocked in the 2014.

As the farm crisis grows—read IndiaSpend’s recent report here--the increasing volume of rural e-transactions indicates how technology might be one mode of mitigation.

With 330 million of India’s 687 million GSM mobile phones now in rural areas, according to Cellular Operators’ Association of India (COAI), e-transactions with the government are likely to grow rapidly. There is little doubt that farmers are enthusiastic adopters of technology via mobile phones.

Gujaratis are India’s most enthusiastic adopters of e-government services, leading other Indian states in e-transactions, although it offers fewer services than close competitors Madhya Pradesh and Tamil Nadu.

Andhra Pradesh tops the list of e-government services offered: 224, followed by Telangana and Gujarat, which offer 186 and 181 e-services respectively.

Experts said that these numbers could stem from a lack of knowledge about such e-services and some e-governance project failures.

There are many e-governance projects that have failed because they were launched without creating back-end support, said Sunil Abraham, executive director of Bangalore’s Centre for Internet and Society, an advocacy.

“The number of transactions cannot be the only criteria for judging performance of an e-governance project,” said Abraham. “We must also record time taken to deliver the service in response to the request received.”

Apart from state government e-governance projects, there are 20 “mission-mode” projects under the national e-governance plan, presented first in 2004-05. Some of the projects include MCA21, an online platform that allows private and public companies in India to remotely file financial and shareholder information for regulatory purposes, and Passport Seva, which lets citizens apply for a passport online and others.

Let us see how the top three e-services work to understand how such services could benefit users. The services are: agriculture, PDS and utility services and bill payment.

As we said earlier, about 980 million e-transactions were recorded in the agriculture sector, about 30% of the total. These are mainly transactions related to farmers seeking advice on weather, soil, new registrations, daily market prices and arrivals of commodities in more than 3,200 agricultural markets across India, through SMS and email for registered users.

The data show a three-fold increase in the number of farmers registering for agriculture- related advisories, from 3.7 million in 2013 the figure rose in 9.3 million in 2014.

Although it is true that more farmers use mobiles to seek advisories, it is difficult say how helpful these advisories might be, said food and agriculture policy analyst Devinder Sharma.

“The perception that farmers are not tech-savvy and unscientific is incorrect,” said Sharma. “They need it most, and (they) are trying to make use of such services.”

The next most used e-service is the PDS, which recorded 530 million transactions, mainly in four states: Gujarat, Madhya Pradesh, Uttar Pradesh and Maharashtra.

Gujarat accounts for more than 50% of total PDS e-transactions, since it has digitised its distribution system. This includes receiving and issuing coupons after verifying ration cards through barcode readers and biometrics, and sending out PDS SMS alerts.

Digitising the subsidised-food distribution system—a network that loses 42% of money to corruption according to government admission in parliament this year—could also clean up its corruption. End-to-end computerisation of PDS in Gujarat has helped the state eliminate bogus or duplicate ration cards which were the primary reason for leakage.

While most states have started digitising the PDS some of the biggest states, such as West Bengal, Orissa and Rajasthan, haven’t yet started. The primary beneficiaries of such e-services are poor Indians.

While digitisation has helped Gujarat plug leaks, there is more to be done.

It is true that e-governance helps cut corruption, empower citizens through information and improves their engagement with the government, but a request made through internet does not necessarily speed it up, said Ashok Kumar Jain, board member of the India chapter of Transparency International, an anti-corruption non-profit organisation.

“Just creating an interface for accepting requests is not enough,” said Jain. “Government should ensure that it has the resources and trained people to act on the request.”

The third most commonly used e-governance service relates to bill payment and other utility services. Gujarat again leads the pack, with about 60 million transactions followed by Karnataka and Andhra Pradesh.

The reach of e-services helps in eliminating intermediaries and faster delivery of government services. Considering the size and diversity of India,the only way to deliver essential services to people to its remotest corners is e-governance, said Abraham.

The 3.5 billion e-transactions, he said, is proof that citizens would rather use their mobile phones than stand in queue.

(Patil is a New-Delhi based freelance journalist. He has worked with The Economic Times, DNA and The New Indian Express.)