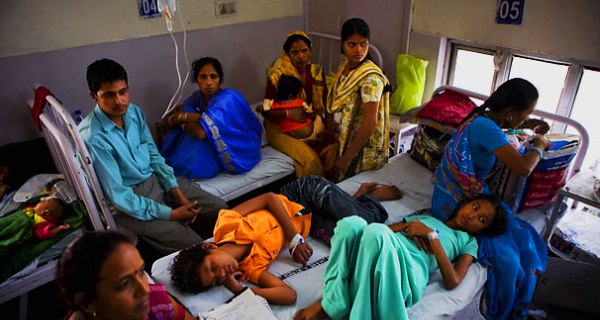 * Himachal Pradesh has the best infrastructure in rural healthcare

* Madhya Pradesh has the highest number of health centres without doctors

The Ministry of Health and Family Welfare came out with an official release recently about its ambitious target of achieving universal health coverage during the 12th Plan (2012-2017) period.

IndiaSpend’s Sourjya Bhowmick looks at the rural health statistics in India (as on 2011), and the situation is worrying in rural health infrastructure as well. While Himachal Pradesh, with the highest rural population density, has the best health infrastructure, Madhya Pradesh has the highest number of health centres without doctors. And rural India has a shortage of over 12,300 specialist doctors (around 64%), vacancy for 3,880 doctors and a shortfall of 9,814 health centres.

Incidentally, the National Rural Health Mission (NRHM) has spent around Rs 101,166 crore since its inception but key issues like rural healthcare infrastructure and access to medical advice leave much to be desired. Let us now look at these indicators in states that have high rural population, according to Census 2011.

Rural population as per Census 2001

Rural population as per Census 2011

We can see that the rural population has not declined sharply in the last decade in these states.

The report also takes into account only community health centres and primary health centres as they serve more rural population than the sub-centres. Let’s see the definition of CHCs and PHCs:

(*Table organised based on states with highest rural population)

From Table 2, we can see that primary health centres in states like Jharkhand, Bihar and Madhya Pradesh cover more people than it is designed for. Even in the case of community health centres, the all-India figure is much higher than the objective that CHCs should cover 120,000 people.

Let us now look at the healthcare infrastructure of various states:

Table 3: How equipped Are Health Centres?

We can see that the all-India shortfall of community health centres and primary health centres works out to 9,814. Uttar Pradesh and Bihar lead when it comes to shortfalls in CHCs and PHCs. It may also be said that more the rural population, the more it accounts for the shortfalls. Though the shortfall situation is acute, the reasons are not known from published government documents.

Where Are The Doctors?

Doctors (allopathic) and specialists form an integral component of the healthcare system but a lot remains to be fulfilled.

% of PHCs without doctors

It can be seen that around 1,100 PHCs (around 5%) across the country function without doctors in rural areas. Chhattisgarh has the highest number of PHCs (243) without a doctor. All PHCs in Uttar Pradesh and Assam are shown as functioning with doctors.

Rural India needs 19,236 specialists at its community health centres but it has a shortfall of 12,310 doctors, which is around 64%. Madhya Pradesh, Orissa and Rajasthan have the maximum shortfall in doctors at CHCs.

So, gaps in rural healthcare infrastructure need to be addressed. The expert consensus is that public spending on healthcare should be doubled to more than 2% of GDP from the current 1%. But the worry is that despite increased spending under NRHM, lack of healthcare infrastructure and access to doctors continue to be big concerns for rural India. And the proposed universal health coverage is truly an ambitious idea if you look at the World Health Organisation’s World Health Statistics 2012:

* Around 47% of hospital admission in rural India is financed through loans and sale of assets.

*About 30% of people in rural India did not opt for treatment because of financial constraints; and

* 39 million Indians are pushed to poverty because of ill-health every year.