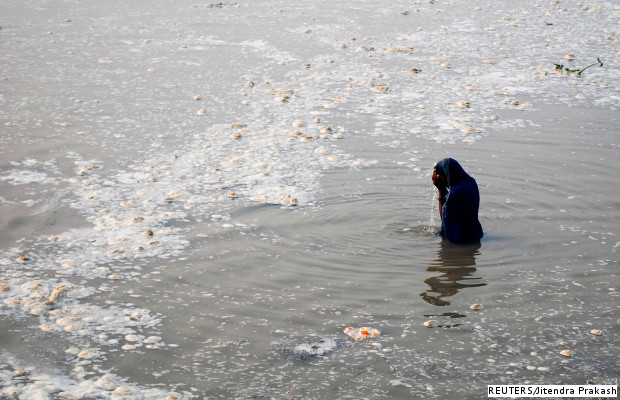 A woman taking a dip in the polluted Ganga river near Allahabad, Uttar Pradesh.

Despite spending more than Rs 986 crore over the past three decades, a key measure of pollution is 215 times the acceptable level at places along India's holiest river, the Ganga.

The failure of 30 years of spending and effort comes at a time when Prime Minister Narendra Modi’s government has declared it will spend Rs 20,000 crore ($ 3.1 billion) in another attempt to clean the river, a favoured demand of Hindu groups.

At Dakshineshwar in Kolkata, West Bengal, the count of faecal coliform--a rod-shaped bacterial species found in faeces--is 198 times the level needed for you to safely bathe in river water. Another commonly used measure of water quality, the total-coliform count is 215 times the permissible level, according to Central Pollution Control Board data.

The money over the past 30 years has been spent on 48 towns in five states on 70 schemes, including sewage- and effluent-treatment plants, garbage handling and crematoria, according to information provided by the government to the Lok Sabha in 2014. Modi’s plan now intends to finish work left incomplete and launch new river cleanups.

The effort to clean the Ganga, called the Ganga Action Plan (GAP), started in 1985 when Rajiv Gandhi was Prime Minister.

A slightly positive indicator in a largely-failed programme comes from biochemical oxygen demand (BOD) which has come down since 1986 in many cities and towns. 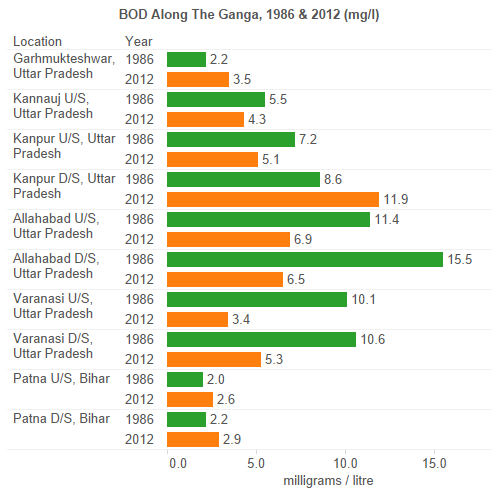 Source: MOSPI; Ministry for Environment & Forests; Note: These are average values for the summer months March-June.

While BOD has come down in many places since 1986, it is still not under the safe level, which is 3 milligrams/litre (mg/l).

Interception, diversion, conveyance and treatment of effluents over the past three decades have resulted in this improvement.

The most polluted stretches of river in terms of BOD are in Uttar Pradesh, particularly near industrial and religious centres. The BOD is 4 times the safe level at places such as Kanpur.

Kanpur, which has an average BOD value of 11.9 mg/l in the summer months, is in an industrial belt with many leather units. The BOD downstream from Kanpur has even increased by 3.3 mg/l since 1986.

The uniform rise in faecal coliform, a measure of human waste, indicates how treatment facilities have been overwhelmed or bypassed.

The presence of faecal coliform in river water is permissible when the count is less than 2,500 MPN (Most Probable Number) per 100 ml.

West Bengal is highly polluted in terms of faecal coliform, with the five worst-polluted areas present in that state.

Total coliform counts, supposed to be less than 5,000 MPN per 100 ml, are the worst in West Bengal too, with the river near Garden Reach in Kolkata reporting levels 118 times the safe level.

West Bengal dumps 51% of its waste into the Ganga without treatment, according to this pollution assessment report published by Central Pollution Control Board in 2013.

So, is there any part of Ganga that has clean water?

No. of test sites with safe water

As we said earlier, there are a few. ¦

Update: The graphic comparing BOD values has been revised.

(Sharma is an intern at IndiaSpend.)