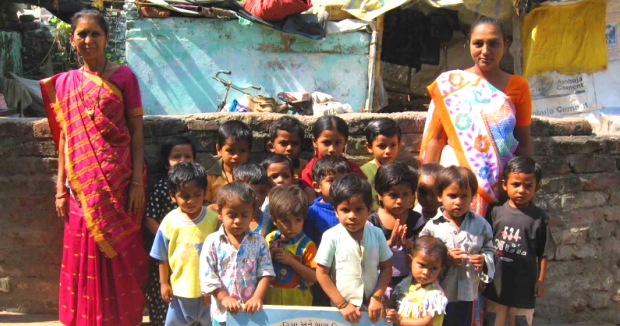 The Government allocated Rs 17,700 crore for the Integrated Child Development Services (ICDS) Scheme in its Budget 2013-14. The ICDS is today the 5thlargest flagship scheme of the Congress-led UPA Government.

The good news is that Governments, over the years, have focused on the continuing needs of newborn and young children until the age of 6 years. The bad news is that despite targeted efforts, a scheme that’s been running for close to 30 years now (with a cumulative spend of Rs50,586 crore) has not shown the results one would expect. Even in a large country like India.

Take the headline figures: India continues to have more malnourished children than sub-Saharan Africa at 44% versus 34% for Ethiopia and 33% for Somalia. Put another way, nearly one in every 5 malnourished child in the world is from India. More stark are the inter-state variations within the country. Bihar, Madhya Pradesh, Maharashtra, Orissa, Rajasthan and Uttar Pradesh account for more than 80% of the cases of child malnutrition.

A recent report by India’s Comptroller & Auditor General (CAG) said there were fundamental issues such as operational problems related to Anganwadi centres (AWC means a play centre within a village or a slum, and is the focal point for delivery of all services provided under ICDS), staff shortages and excess and wasteful expenditure. The CAG in its recently released audit report on the scheme’s performance, has highlighted discrepancies at 2 levels, namely, operational and expenditure-wise:

Physical structure issues: An Anganwadi is the main place where ICDS services are received and where up to 40 children can be accommodated during day-time. According to the programme, the facility must have a separate clean kitchen to provide hot food to children under the Supplementary Nutrition Programme, a child-friendly toilet and separate sitting space where pre-education programmes can be provided. The state governments spend Rs 5,000 on each AWC to equip them with necessary equipment and furniture.

Out of 2,639 AWCs audited by CAG, it was found that the majority (75%) of AWCs were pucca (solid built) buildings and 13% were in semi-pucca buildings while 9% were Kachha (not strongly built) and 3% were in partially covered spaces. The states of Chhattisgarh, Gujarat, M.P, Meghalaya, and U.P had almost 81-97% of their AWCs in ‘pucca’ buildings. However, West Bengal and Jharkhand had only less than half of their AWCs in a ‘pucca’ building.

State-wise, it was found that Andhra Pradesh had almost 82% and 91% of AWCs without toilets and drinking water. Almost 80% of AWCs did not have separate toilets for girls. 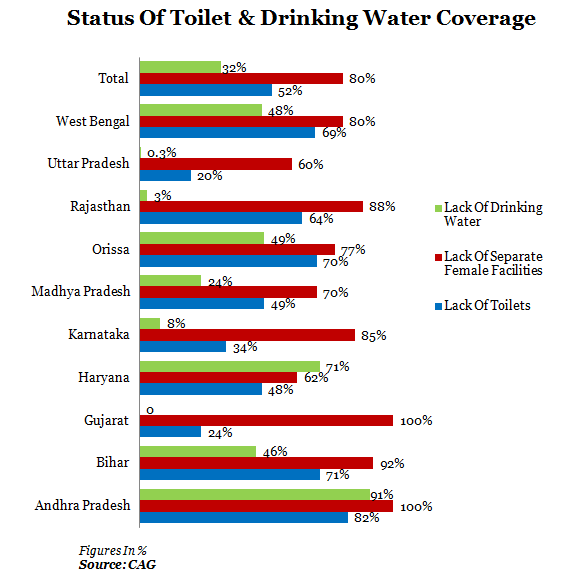 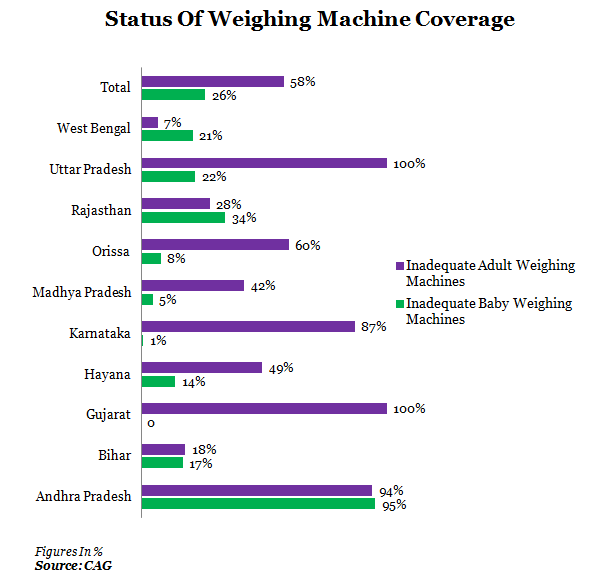 The staff shortage was acute under all categories. The highest percentage of vacancy through 2007 to 2011 was at the supervisory level followed by child development project officers (CDPOs). 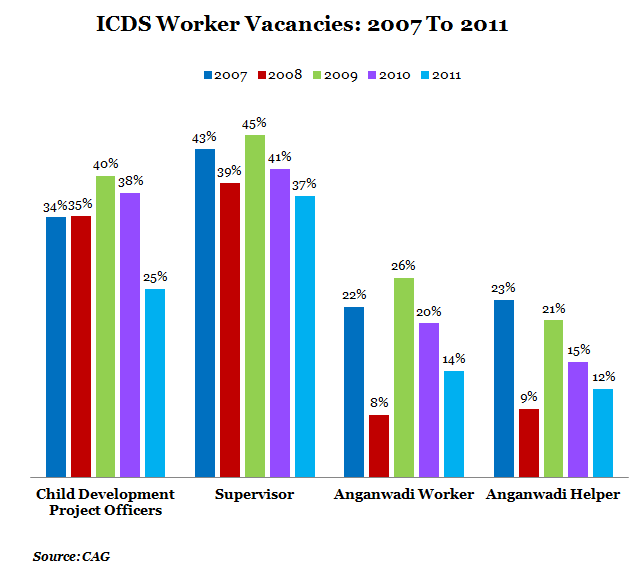 The audit also found irregularities on the expenditure front. A 'flexi fund’ was designed to provide Rs 1,000 annually from 2009 to cover unforeseen events. A significant number of states were not providing AWCs the flexi fund. Out of the 2,689 AWCs audited, 53% AWCs did not receive any flexi fund allocations.

Another expenditure irregularity: while the total release for salaries to ICDS functionaries was Rs 1,753 crore in 2008-09 to 13 states, the actual expenditure incurred was Rs 2,853 crore indicating unrealistic budgeting and diversion of funds from critical components of the scheme.

The audit also reported that funds were either parked in civil deposits/ personal ledger accounts/ banks accounts/ treasury, which resulted in blocking of funds amounting to Rs 70.1 crore or used for activities not permitted under ICDS amounting to Rs 57.8 crore. For example, in Haryana, Rs 38.6 crore was diverted from the SN scheme to the Ladli scheme, payment of salaries to AWWs and purchase of furniture for AWCs. 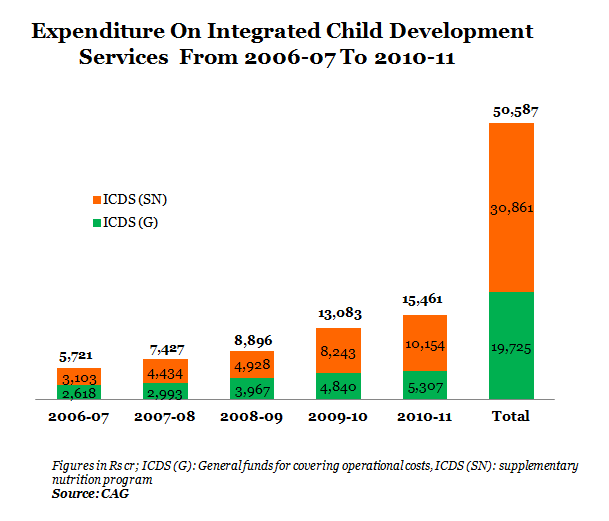 ICDS was launched on 2nd October 1975 by the Central Government under the Ministry of Women and Child Development and provides services for children before and after birth and during the period of growth to ensure full physical and mental and social development.

The scheme uses an all-inclusive approach to the development of children from the age group of 0-6 years and pregnant and lactating mothers. The objectives primarily focus on:

* Reduction in rates of mortality, morbidity, malnutrition and school drop-outs

* Co-ordination among various departments to promote child development; and

* Improve mother’s capacity to ensure the child’s mental and nutritional health by providing her proper nutrition and health education. 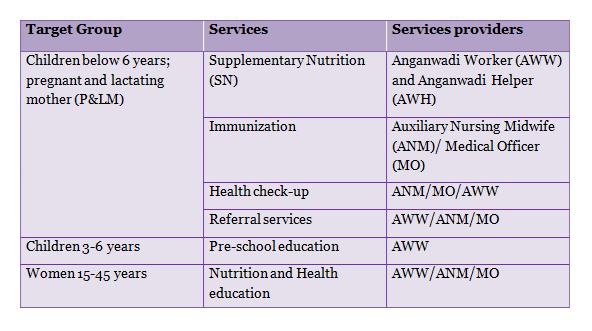 Supplementary nutrition, pre-school education and health education are delivered at the Anganwadi Centers (AWCs) at the village level run by an Anganwadi Worker (AWW) or an Anganwadi Helper (AWH). The remaining three programs, immunisation, heath check-ups and referral services, are delivered through the public health infrastructure.

The scheme is centrally funded where the flow of funds is from the Ministry to the state and UT health departments. The departments then release the funds to districts/projects. The scheme has also received funding from international agencies such as the United Nations Children’s Fund (UNICEF), Swedish International Development Agency (SIDA), Co-operative Assistance and Relief international (CARE), World Food program (WFP) and World Bank.

The funds are released under two main categories: general funds for covering operational costs or the ICDS (G) and the second for supplementary nutrition or ICDS (SN).

Table 2 outlines the funding pattern of the scheme since inception: 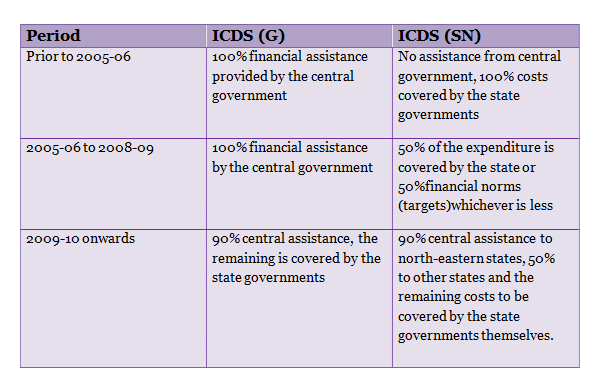 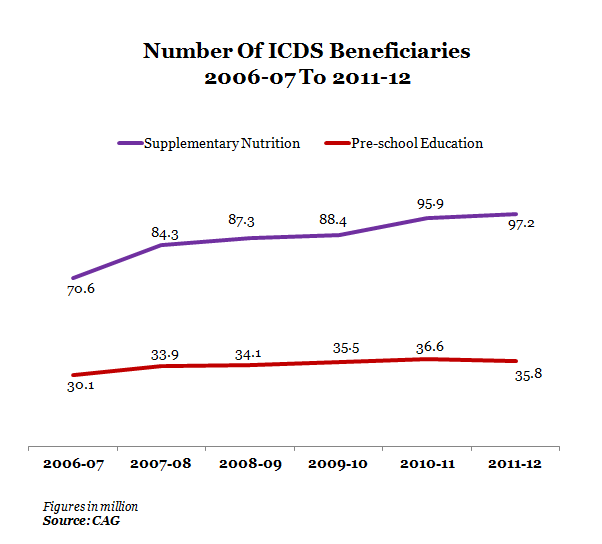 So, it is clear that there has been an increase in the number of beneficiaries from 70 million to 97 million children for the supplementary nutrition programme. The increase under pre-school education has only been marginal from 30 million to 35 million out of the total 158 million children in the country.

The government needs to focus on increasing community participation, communication and gender equality in access to services. In addition to these efforts, the government must also monitorthe operational and expenditureissues raised by CAG in order to achieve the goals set for ICDS.