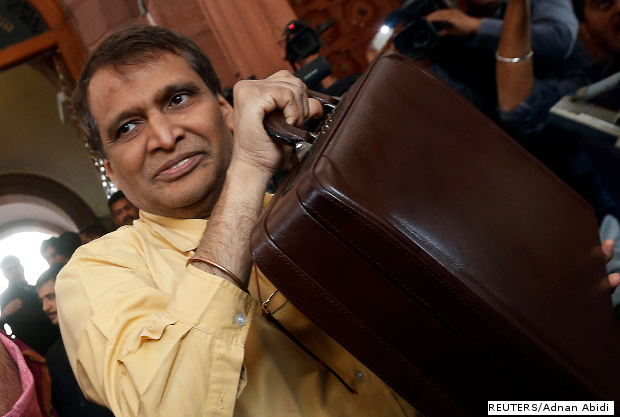 "Prabhu, yeh kaise hoga? (God, how will this happen?)"

In droll fashion, that was the rhetorical question Railway Minister Suresh Prabhu posed to himself and God, as he presented the first full railway budget of the National Democratic Alliance (NDA).

Prabhu's ministry intends to invest Rs 856,020 crore ($137 billion) over the next five years to revamp the world's most travelled railway network--and he intends to do this without any passenger-fare hikes.

Part of the money over this year and the next four, will come from the central government, which, on Thursday, announced Rs 40,000 crore annually as additional finance. The ministry also plans to borrow Rs 17,655 crore from the market, use Rs 17,793 crore from internal resources and get Rs 5,781 crore through private-public partnerships.

This leaves Prabhu with a Rs 18,782-crore hole for this year alone and a task on his hands : to cut costs, raise money and generate profits.

As a first measure to cut costs, Prabhu announced no new trains--the first for a railway minister after many years.

The minister has set four goals for the transformation of Indian Railways over the next five years:

* To make the railway a safer means of travel

The rail budget has laid out a white paper for railway reform.

The minister informed Parliament that the operating ratio (how much money is spent on day-to-day operations to earn revenues, giving an indication of the funds left for safety and expansion) of Indian Railways would improve from 91.8% in 2014-15 to to 88.5% this year, the best in the last nine years.

Let us look at the projected income of Indian Railways for 2015-16.

Sundry and other earnings

Let us now look at the projected expenses.

The government has also been able to save on working expenses in the current financial year on account of a drop in prices of high-speed diesel (HSD).