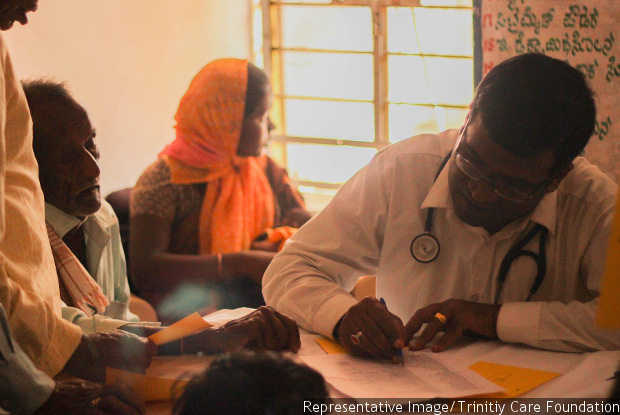 Despite a Rs 10,290-crore increase in health funding for 2017-18, an investigation of the central government’s health budget reveals that most of this money is not being spent on India’s health priorities, which, instead, now face funding cuts.

Elimination of tropical diseases (kala azar, filariasis and leprosy) over the next two years; elimination of a vaccine-preventable disease (measles) by 2020. Elimination of tuberculosis (TB) by 2025; and “significant reduction” of infant and maternal mortality by 2020: These were some key proclamations related to health made by Union Finance Minister Arun Jaitley during his February 1, 2017, budget speech for 2017-18.

Given that India has an infant mortality rate (IMR) of 37 per 1,000 live births--or higher than the average for 154 middle- and low-income countries--the world’s highest TB burden, with 27% of the world's new cases, and accounts for 58% of new leprosy cases detected globally, Jaitley appeared to address some of India’s most significant public-health concerns. Adequate funding could lead to significant improvement in India’s health systems and health status.

But Jaitley’s budget indicates inadequate allocations or funding cuts to his declared priorities. Most of the Rs 10,290-crore increase will be spent on issues regarded as low priority: New medical colleges, new premier medical institutions and converting health sub-centres into “health and wellness centres”--but with no more than Rs 60,000 per centre annually.

The question then is, where has this additional money gone? To open new medical colleges, new premier medical institutions--while older ones languish--and converting 150,000 health sub-centres into “health and wellness” centres but without adequate funding.

To eliminate measles, India will need to invest in stronger immunisation systems and social mobilisation. Most countries that have eliminated measles have used some form of a campaign approach, as India has by starting the first phase of a measles-rubella vaccine campaign to immunise 35 million children in 2017 and 410 million children over the next two years, as this World Health Organization statement pointed out.

Has money been set aside to achieve these targets? It appears not.

The union health budget includes a separate head, the National Rural Health Mission (NRHM), to fund state rural healthcare. Within the NRHM budget is a sub head called the “Reproductive and Child Health (RCH) flexi-pool”, which sets aside funds for immunisation, including funding of the polio-eradication campaign. To improve healthcare in urban areas (where measles remains a significant problem due to high population densities), the central budget sets aside money under the head National Urban Health Mission (NUHM).

To fund the measles campaign and eliminate measles, funding under RCH flexipool (for rural areas) and under NUHM (for urban areas) should have been higher than previous years.

Similarly, funding for the National Health Mission, which aims to provide universal access to affordable and quality healthcare and funds both NRHM and NUHM, has been reduced by Rs 197 crore over a year.

India has 27% of the world’s new TB cases--one of the biggest infectious disease killers in India. The country had 2.8 million new TB cases in 2015, up from 2.2 million cases in 2014, according to the World Health Organization’s Global Tuberculosis Report 2016.

In such times, moving the goal post from control to elimination makes sense. In January 2017, the Supreme Court also directed the government of India to move from alternate-day medication to a more effective daily regime. But this would be require a larger budget.

As we said, the union budget’s NHRM head provides for healthcare in rural India. Within this budget head is a sub-head called “Flexible Pool for Communicable diseases”, which includes funding for the Revised National Tuberculosis Program.

Now, funding appears to have increased by Rs 87 crore over a year to 2017-18, but the revised budget estimates--drawn up after the budget is presented--reveals a drop of Rs 13 crore over 2016-17.

Adjusting for purchasing power parity, the funds available for TB control would be even lower, which means there are no new investments at a time when the TB programme needs to be expanded.

The government had estimated that the the annual requirement for this maternity benefit scheme--which provides iron and folic-acid supplements to pregnant women to prevent maternal anaemia, sepsis, low birth weight, and preterm birth--would be Rs 14,512 crore ($2.1 billion), according the report of the Standing Committee on Food, Consumer Affairs and Public Distribution (2012-13).

“At the rate of Rs 1,000 per month for six months, the scheme expenditure towards maternity benefits to 2.25 crore pregnant and lactating women works out to Rs 14,512 crore per annum,” said the report, quoted in the Indian Express on February 18, 2017.

So, the ministry plans to provide maternity benefits only to first-borns, leaving other children vulnerable.

Of Indian infants who died within 29 days of being born between 2010 and 2013, 48% were underweight or were premature. India has more than 3.5 million preterm births every year, more than any other country, IndiaSpend reported in November 2016.

India’s health budget, as we said, rose Rs 10,290 crore in 2017-18 compared to the previous year. While this appears higher than ever, it is inadequate to bring India--which currently spends less than 1.5% of gross domestic product (GDP) on health--close to a minimum desirable health spend: 2% of GDP. As we have seen, this additional money does not seem to have gone to the government’s priorities: Reducing infant mortality or control of TB and other communicable diseases.

A major increase in budgetary allocation has been towards more medical colleges at district hospitals, an increase of Rs 2,855 crores, accounting for about 27% of the Rs 10,290-crore rise in health funding.

India does need more medical graduates, but increasing medical colleges will not be easy, considering that even premier institutes, such as branches of the All India Institute of Medical Sciences (AIIMS), set up by ministry of health and family welfare, in state capitals are struggling. For instance, five years after the first batch was admitted, AIIMS Bhopal does not yet have a blood bank and does not conduct surgeries, and important faculty positions are vacant, The Hindu reported in January 2017.

Rs 1,525-crore increase for new AIIMS, while older ones struggle

The Pradhan Mantri Swasthya Suraksha Yojna is supposed to set up new branches of AIIMS in the states. In addition to the 11 that exist, Jaitley announced setting up of two more AIIMS, in Jharkhand and Gujarat.

Instead of opening new institutes, and investing about 8% of the health budget (Rs 3,975 crore of Rs 47,352 crore) to do so, the government should ideally focus on making sure that the ones already opened are functioning.

Another significant increase of about Rs 3,000 crore is under the “Health System Strengthening” sub-head of NRHM. This is likely to be allocated to another pronouncement: Converting 150,000 health sub-centers nationwide into “health and wellness centres”.

Again, this is not a bad idea, since functional sub-centers can take primary healthcare closer to where people live. But with no plan for this transformation made available--not even how many will be converted this year--Rs 3,000 crore appears inadequate.

For example, even if 25% of the increased allocation under this sub-head is to upgrade sub-centres, no more than Rs 60,000 would be spent per sub-centre.

So, while the current budget’s health proclamations are apt, the funding increases for issues of low health priority are unlikely to make a significant impact on the overall well-being of India’s people.

(Mohan formerly coordinated health and nutrition programmes for UNICEF’s country office in India and is the co-founder of Basic Healthcare Services, a nonprofit that offers low cost, high quality primary healthcare in rural under-served communities. He is also Director, Health Services, of Aajeevika Bureau, a nonprofit that provides services to labour-migrants.)