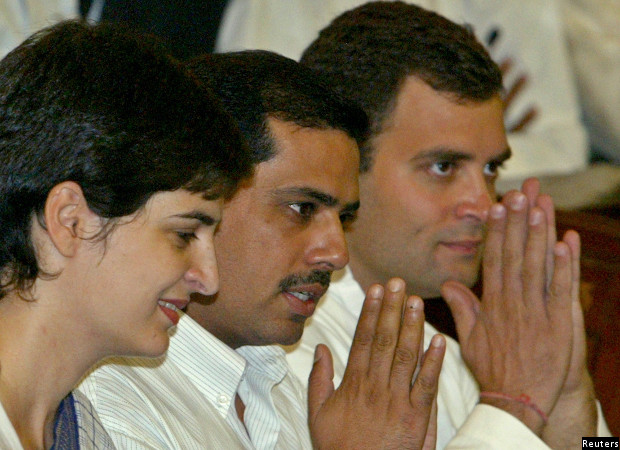 Robert Vadra, son in law of Congress president Sonia Gandhi, continues to be officially exempt from security checks at airports, according to a right-to-information (RTI) response received from the government by data journalism site factly.in.

This contradicts reports in September that Vadra's name has been removed from what is called the "no-frisk list".

I appreciate that my name will not appear in the VVIP list anymore. I hope this is a dead issue now and will not be used against me.My Best wishes.

While the latest list of those exempt from security checks does not have Vadra's name on it, in comparison to the old list, there is an additional note on the new list that allows him to bypass security--if he so chooses.

"The accompanying spouse of the above said VVIPs/VIPs is also exempted from pre-embarkation security checks at all civil airports in the country," the new note said.

This means that if Vadra accompanies his wife Priyanka Gandhi, who is protected by the Special Protection Group (SPG), he is still exempted from pre-embarkation checks.

As many as 32 categories of people are exempt from pre-embarkation security checks at India's civilian airports, said the RTI response received by factly.in. Such exemptions are granted:

Here's who is exempt from security checks at Indian airports, according to the latest list:

Note: The Accompanying spouse of the above said VVIPs/VIPs is also exempted from pre-embarkation security checks at all civil airports in the country

The Special Protection Group (SPG) is one of eight central armed police forces of India. It was created in 1988 by an act of the Parliament of India for “providing proximate security to the Prime Minister (PM) of India and former Prime Minister of India and members of their immediate families”.

Family of a serving PM may decline security. Former PMs and their immediate family may also, if they choose, decline SPG security.

(Dubbudu has been working on issues related to the Right to Information for a decade. He is a data/information enthusiast & is passionate about governance/policy issues.)