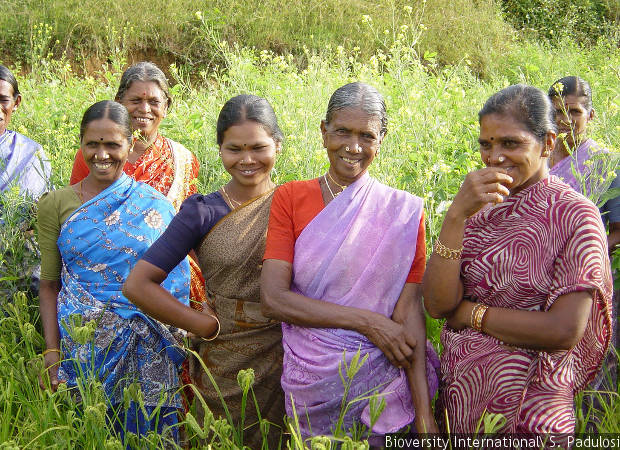 Rising income levels and stability in families are disincentivising women from joining the labour force, according to Reassessing Patterns of Female Labor Force Participation in India, a March 2017 report by the World Bank, which analysed government data from 2004-05 to 2011-12. As many as 19.6 million women--equivalent to the population of Romania--dropped out of the workforce during this period, of which rural women accounted for 53%, the report said.

In its three year (2017-20) ‘action agenda draft’ released on April 23, 2017, NITI Aayog, a government think-tank, stressed on the importance of promoting equal participation of women in the Indian economy.

Only 27% Indian women are in the labour force--the lowest among BRICS countries; among G-20 countries, it is better only than Saudi Arabia, IndiaSpend reported on April 9, 2016.

The labour force does not include women who do “unpaid care work“, which refers to all unpaid services within a household including care of people, housework and voluntary community work.

The study found that the decision to join the labour force is primarily influenced by economic stability at home rather than social norms, educational attainment and age. The study assessed the proportion of self-employed, regular wage earners and casual labour in a given household’s working-age population.

Employment Status Of Members In A Household

Source: World Bank; Figures in percentage; for all ages for the year 2013

This is in sync with earlier studies (here and here), which suggest that with rising household income levels, women in rural India withdraw from paid labour and engage in “status production” at home.

Status production refers to work that maintains and enhances the family’s social standing, although they do not necessarily enhance the woman’s status within that unit. Common examples of status production work include the upkeep of suitable work clothes, provision of food at the workplace, entertainment of colleagues and feeding hired hands and co-workers within the woman’s family.

Rise in educational qualifications correlated with decline in workforce

The FLFP rate is highest among illiterates and college graduates in both rural and urban areas. These two groups, illiterates and those with college education, are also the groups that experienced the largest drops in FLFP rates during this period.

Higher literacy does not lead to greater decision-making power for women, IndiaSpend reported on February 13, 2017.

Women are dwindling in the workforce despite the enrolment of girls in higher education increasing from 39% to 46% between 2007 and 2014, IndiaSpend reported on July 27, 2016.

Between 2004-05 and 2011-12, FLFP has dropped across all educational categories in both rural and urban areas. This indicates that irrespective of one’s education, the incentive for females to participate in the labour force has declined over the period.

“The decline in the FLFP rate for all educational categories and the particularly poor performance of those with secondary and higher secondary (grade XII) levels of education need to be explored in detail,” the study said. This can probably be explained by a lack of appropriate jobs in rural areas, or the expectation of higher wages among those having secondary levels of education.

“The critical issue in terms of the quality of jobs is what you can earn--the wages,” Sher Singh Verick, deputy director, International Labour Organization, South Asia, told The Wire in this December 2016 interview. “If you are able to get a reasonable wage, this will act as a pull factor to get you into the labour market. If wages remain very low for you, your incentive as a woman becomes lower.”

The Aayog’s 2017-20 agenda says women tend to be paid less, work in less productive jobs and are over-represented in unpaid care work, and engaging in vulnerable forms of employment is a reflection of their subordinate position in the household.

The World Bank study calls for a systematic analysis of both the supply and demand sides of the segmented rural labour market.

In urban areas, participation rates of women dropped between 2004-05 and 2011-12, leading to an overall drop in the FLFP rate for both married and unmarried women.

So, while marital status did have an impact on the participation rates of women in the labour market, it does not explain the drop that occurred during 1993-94 to 2011-12 in the urban areas.

The study found that irrespective of their caste (scheduled caste, scheduled tribe, other backward class or general), the FLFP rate of married females is higher than unmarried females in rural areas.

Merely increasing women’s access to education and skills will not necessarily lead to a rise in FLFP, the World Bank study suggested. Gains will not be realised unless social norms around women’s (and men’s) work also change, and/or the rural labour markets offer forms of employment that are acceptable and attractive for women and their families.

Jobs near home attract women: 93% of unemployed female youth said they would take a job if they could work from home or in the village, according to a pilot survey conducted among rural, below-poverty-line youth in areas around Bhopal in 2015, IndiaSpend reported on March 8, 2016.

“The real test for the coming years is how jobs can be created in the rural areas so that women living in rural areas can access them. Local job creation is the most important message. It is very important because you are going to need more jobs where women live. Most of the population is still within rural areas--65% of the people in India are still in rural areas,” Verick said in The Wire interview.