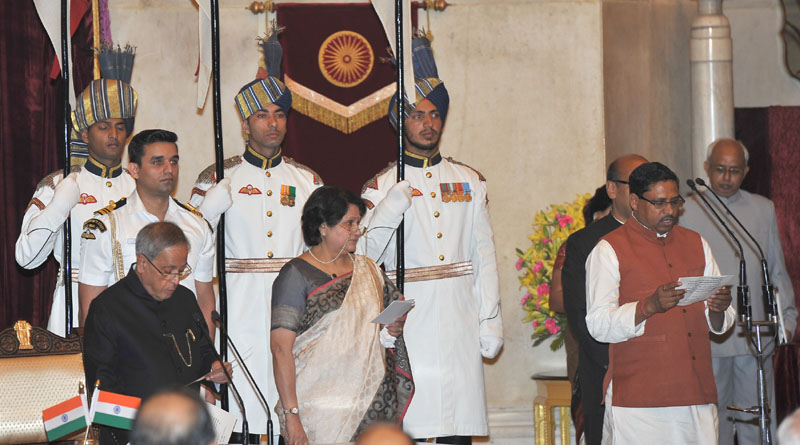 (Dr. Ram Shankar Katheria, who has 21 cases against him, taking oath as Minister of State For Human Resource Development)

While Prime Minister Narendra Modi has expanded his cabinet to 66 ministers, reports by independent non government organizations (NGOs) have found that 20 ministers (31%) have declared criminal cases against them and 17% (11 ministers) have serious criminal charges filed against them.

A report by Association For Democratic Reforms, an NGO working for better public policy and transparency on elections, said serious cases include attempt to murder, spreading communal disharmony and electoral violations.

Dr. Ram Shankar Katheria, MP from Agra, Uttar Pradesh and a minister of state for human resource development, has 21 cases registered against him. Data released by myneta finds that the maximum (14) relate to rioting (IPC Section 147) followed by assaulting public servants (9) and attempt to provoke breach of peace (5).

Uma Bharti, MP from Jhansi, Madhya Pradesh and water resources minister, has 13 criminal cases registered against her and cognizance has been taken in 11 cases. While six charges are related to rioting, four charges relate to obscene acts and songs (IPC Section 294).

Hansraj Ahir, an MP from Chandrapur, Maharashtra, and a minister of state for chemicals and fertilizers, has 11 cases registered against him. The maximum charges (4) relate to abetment of desertion of soldier/sailor/airman under IPC Section 135) followed by charges (3) related to being member of an unlawful assembly.

Nitin Gadkari, MP from Nagpur, Maharashtra and transport minister, has four cases registered against him. While two relate to being member of an unlawful assembly, one relate to house trespass.

Upendra Kushwaha, an MP from Karakat, Bihar and a minister of state for human resource development, has four cases registered against him. The maximum (3) charges relate to not following order issued by a public servant.

Raosaheb Dadarao Danve, MP from Jalna, Maharashtra and minister of state for consumer affairs, food and public distribution, has four cases registered against him. While two cases are about being member of an unlawful assembly, two relate to rioting.

The point to remember is that while cases have been filed against ministers, there are no cases where charges have been framed nor where they have been convicted.

If convicted/charged, ministers/MPs have to quit their seats and cannot contest elections or hold ministerial positions till they are cleared by the courts. Examples could be former Tamil Nadu Chief Minister Jayalalithaa and former Bihar Chief Minister Lalu Prasad.