Religious Riots Down In 2015, But Other Riots Rise 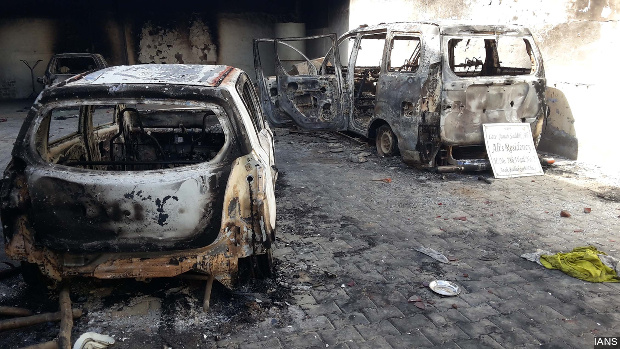 Burnt vehicles in Ballabhgarh town of Haryana, May 2015. The rich agricultural state of Haryana saw most of India's communal rioting cases (201 out of 789) in 2015, though the overall incidence of communal riots in the country came down by 33% over the previous year 2014.

Religious tension in Ballabhgarh, Haryana, when 150 Muslims sought refuge in a police station; clashes between Hindus and Muslims during Ganesh festival processions in Belgaum, Karnataka, and riots over the birth anniversary celebrations of medieval ruler Tipu Sultan in Madikeri, Karnataka, represented India's religious volatility in 2015.

However, communal rioting cases in the country declined by a third, from 1,227 in 2014—the year that Narendra Modi was voted Prime Minister—to 789 in 2015, according to National Crime Records Bureau (NCRB) data.

Kerala had more "political riots" than any other state, with more than half of India's cases.

Jharkhand reduced its rate of riots, from 10 rioting cases per million to 2 per million. The overwhelmingly tribal state became five times more communally peaceful in 2015 compared to 2014--when assembly elections were conducted--with communal rioting cases dropping 80% from 349 to 68.

After relatively peaceful decade, riots on the rise across India

Thirty-five years after rioting cases in India peaked at 160 per million in 1980, the country witnessed a relatively peaceful decade with respect to communal violence, especially in the period 2003-2012, when riot rate dropped to 50 cases per million.

The incidence of riots has increased over the last three years to 60 cases per million, or 20% more frequent compared to the last decade.

Note: For 2014 and 2015, we have included in "riots" crimes listed under "unlawful assembly" because they were clubbed together in previous years.

Cases filed only under "riots" have decreased between 2014 and 2015, while those relating to "unlawful assembly" have increased.

Note: For 2014 and 2015, we have included in "riots" crimes listed under "unlawful assembly" because they were clubbed together in previous years.

Mass unrest nationwide in 2015 by dominant caste groups—Patels in Gujarat and Jats in Haryana—likely resulted in the high cases of "unlawful assembly".

The assembly elections in Bihar in 2015, and the parting of ways of the 25-year old coalition of the Janata Dal (United) (JDU) and Bharatiya Janata Party (BJP) resulted in a rise in riots in the Hindi heartland state over three years from 2013, the Indian Express reported in August 2015.