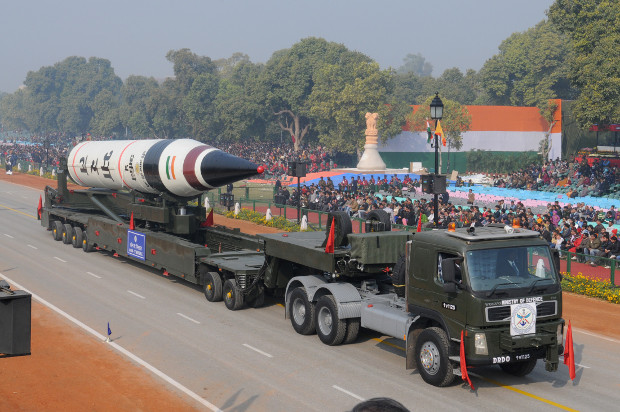 The Agni-V Missile in a dress rehearsal for the Republic Day Parade in January 2013.

Both missiles are part of an ever-growing arsenal capable of reaching every corner of rival territory (including India's Andaman Islands) and carrying both conventional and nuclear warheads. Ironically, these tests are also a good way of ensuring the two countries do not go to war.

“Such tests are considered routine exercises for the two arch-rivals since they developed nuclear weapons capabilities in 1998,” according to Foreign Policy.

Nuclear weapons carried by ballistic missiles are strategic weapons of mass destruction meant primarily to scare and deter, usually ending in strategic stalemates between countries that possess such arsenals.

The possibility of “mutually assured destruction”, or MAD, as it is commonly known, also prevents their use on the subcontinent (See this IndiaSpend report to know more about India’s nuclear weapons program).

India’s ballistic-missile program is driven by the threat it perceives from its nuclear armed neighbours Pakistan and China.

On the 17th year anniversary of India’s nuclear weapons test, PM Narendra Modi lauded the efforts of Indian scientists with the following tweet:

We salute efforts of our scientists & political leadership behind the success of Pokhran Tests on this day in 1998. pic.twitter.com/vPVb1v6xxk

Almost 17 years later, the arch rivals each test fired ballistic missiles. These are strategic delivery systems capable of delivering either nuclear or conventional warheads deep inside each other’s territory, with the focus being predominantly on the former.

When it comes to Pakistan, India has developed/is developing the Prithvi and Agni series of surface to surface ballistic missiles.

The Prithvi ("land") series comprises three short-range ballistic missiles (SRBM) with a range of 150-350 km, capable of targeting major Pakistani cities, such as Lahore, Sialkot, the capital Islamabad and Rawalpindi according to an IndiaSpend analysis.

Agni ("fire") I and II, with ranges of 700km and 2000 km respectively, are capable of targeting almost all major Pakistani cities, including Lahore, Islamabad, Rawalpindi, Multan, Peshawar, Karachi, Quetta and Gwadar.

The development of the Agni I began in 1999, and it was first tested in January 2002. The Agni I fills the gap between the SRBM Prithvi series and medium-range Agni II missile. It has been in service since 2004.

The Agni II is a medium-range ballistic missile (MRBM), first tested in April 1999. It allows India to attack all of Pakistan, although it falls short of major targets within China. Like Agni I, it too is highly accurate and is road and rail mobile.

Agni III, IV and V, with their longer ranges, might be able to reach all of Pakistan, but it can be safely said that they are directed more towards China.

Of these, the operational SRBM Ghaznavi (named after the 11th-century Afghan invader Mahmud Ghazni) is a shortened version of the Chinese M-11 missile and has a range between 270 to 350 km; this means it can target Ludhiana, Ahmedabad and the outer perimeter of Delhi.

The recently-tested Ghauri (named after 12th-century Afghan king Shahbuddin Ghauri, also known as Muhammad of Ghauri) is an MRBM, with a claimed range of 1300 km and is “clearly and unambiguously North Korean in origin”, according to the NIAS report. The report adds that the missile is deployed and can target Delhi, Jaipur, Ahmedabad, Mumbai, Pune, Nagpur, Bhopal and Lucknow.

The Shaheen (falcon) III, a road-mobile IRBM was tested this March and has a claimed range of 2,750 km.