Rotterdam and Calgary: The election of a candidate from a regional party leads to a 7.2 percentage point rise in the level of violence in his or her home constituency, according to a new study.

Violent events rise by 9.9% and violent deaths by 13.4% when a regional party comes to power, says our analysis. We, associate professors of economics, studied the relationship between the election of a regional-party representative and political violence. We defined regional parties as those that are officially recognised by the Election Commission of India as "state parties" and have experienced electoral success in a geographically concentrated area.

There were 74 regional parties active during the period of our study. Some of these are the Asom Gana Parishad, All India Anna Dravida Munnetra Kazhagam (AIADMK), Bodoland People’s Front, Jammu and Kashmir National Conference, Naga People’s Front and Telugu Desam Party.

The study looked at constituency-level assembly election data between 1988 and 2011 and events of political violence between 1989 and 2015.

Regional political parties are a defining feature of Indian democracy. There are several states where the presence of national parties such as the ruling Bharatiya Janata Party (BJP) or the Congress is marginal or where they depend heavily on alliances with dominant regional parties. In Tamil Nadu, for example, the BJP and the Congress play a secondary role in alliances led by regional stalwarts AIADMK and the Dravida Munnetra Kazhagam (DMK) that have been in power since 1967.

Regional parties may, in principle, be better equipped to bring the government to the people, at least relative to national parties. They typically contest elections on a platform that appeals specifically to a geographically concentrated population that commonly identifies along some dimension, such as language, ethnicity, or “nationality”.

But regionalism can come at a price, we found.

Many regional parties are borne out of regional movements that demand greater autonomy, for local populations. They are siblings of the extreme and violent organisations that were borne out of the same regional movements. So, regional parties often retain a complicated and potentially symbiotic relationship with the more extreme segments of the broader movement and may facilitate or overlook the violent activities of extremists in exchange for political support come election time.

Figure 1(a) : The Number Of Violent Events And The Win Percentage For National Parties 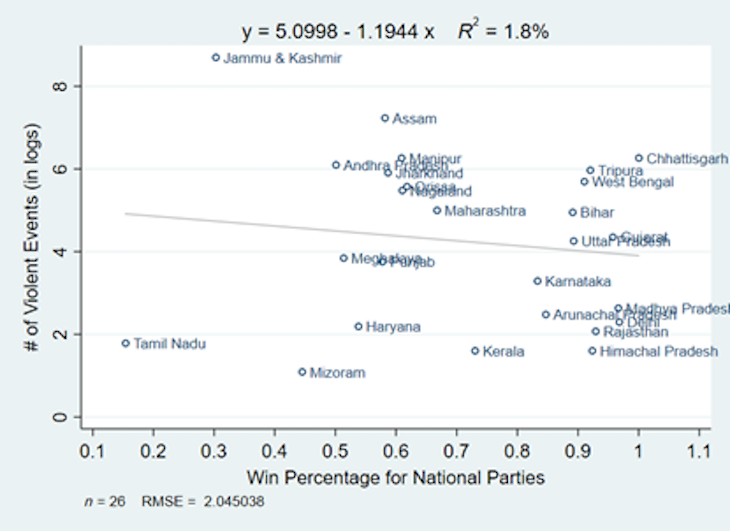 Figure 1(b) : The Number Of Violent Events And The Win Percentage Of Regional Parties 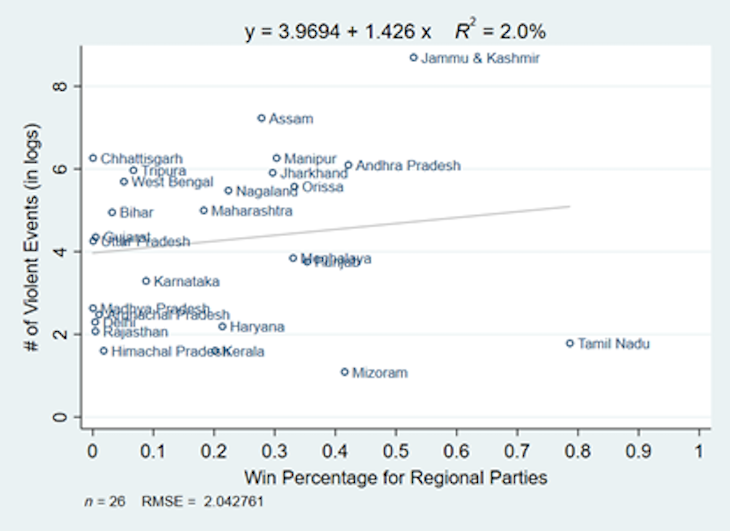 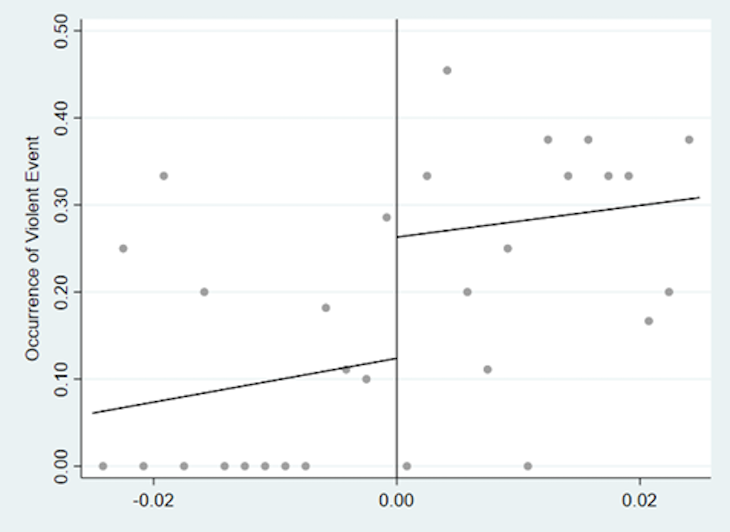 Secessionist roots are a factor

One explanation for the rise in this political violence could be the secessionist origins of many regional parties.

The study divided data into states that did and did not report any active secessionist movement during our sample period. The first category included states such as Arunachal Pradesh, Assam, Jammu and Kashmir, Manipur, Mizoram, Nagaland, Punjab, and Tripura. Then there were states like Gujarat, which primarily experienced Hindu-Muslim conflicts, and those like Andhra Pradesh that dealt with mostly insurgent Naxalite violence.

However, many of these states also experienced communal (nativist) violence. To determine whether the increased violence was due to secessionism or nativism, we further divided the data according to the protagonists involved in the violence. The idea was that secessionist violence would involve insurgents and central or state government forces, while nativist violence would involve groups of insurgents and civilians.

We found that only violence between insurgents and government forces increased when a regional representative was elected, further confirming that the election of these candidates cause secessionist violence in particular.

We also investigated if the level of violence depended on whether the regional party was solely responsible for governing the state or was only a member of a coalition. The violence, we found, was driven entirely by instances where regional parties were part of a governing coalition. This suggested that greater access to executive power may be a means of appeasing the violent groups associated with these regional political parties.

Should regional parties be curbed?