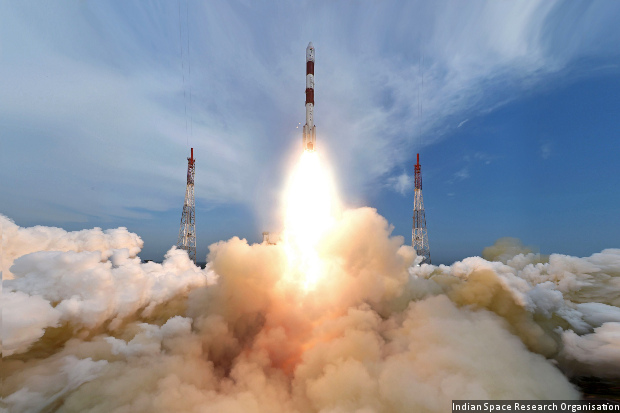 The Indian space programme launched 10 satellites in 2016, three times more than the preceding year and the most ever, according to Indian Space Research Organisation data.

The September 26, 2016, launch of the Polar Satellite Launch Vehicle (PSLV)-C35 set two records: it was the longest satellite-launch mission yet, two hours, having completed its previous mission in just under 30 minutes on June 22, 2016 (another benchmark occasion with the launching of 20 satellites in one go); and the rocket released eight satellites--five foreign and three Indian--into two orbits, something the Indian Space Research Organisation (ISRO) has not done before.

However, in terms of weight, the Indian satellites that ISRO has launched were 10 times heavier, by kg, than foreign satellites carried aloft by PSLV and other launch vehicles over the last decade.

Although foreign satellites (one US, one Canadian, and three Algerian) outnumbered domestic launches on Monday, according to the ISRO list of foreign satellites launched, Indian spacecraft occupied most of the 1,750-kg capacity of the PSLV, which completed its 36th successive, successful launch.

Up to 16% of the PSLV’s capacity was occupied by small satellites from foreign nations, who bought space on the Indian launcher. Deals are arranged by Antrix, the commercial arm of the Department of Space, and these are becoming more profitable by the year.

On the most recent launch on Monday, the combined weight of the five foreign craft was 279 kg, the heaviest being the ALSAT-2B (117 kg), which is an Earth observation satellite meant to help Algeria with management of natural disasters and land planning, among other things.

The combined weight of the three Indian craft was 386 kg. The Indian SCATSCAT-1 alone weighs 371 kg. The SCATSCAT-1 is a government-owned craft intended to observe the earth, aiding weather forecasts among other things. It will operate for five years.

The other two weighed only 15 kg combined, and were from Indian Universities. The PRATHAM (10 kg) is from the Indian Institute of Technology (IIT) Bombay, and the PISAT (5 kg) is from PES University in Bengaluru. They are both conducting scientific experiments of their own.

If a satellite is heavier, assuming it is efficiently built, it is because of multiple payloads, indicating a greater amount of equipment to measure things more accurately or to measure different things. Consider the seven IRNSS spacecraft (1A-1G), all of which featured a separate payload for navigation and ranging. Each IRNSS weighed 1,425 kg, or 84% of the PSLV capacity.

India will benefit from the scientific experience of launching heavier craft, but it has also been suggested--by the BBC here--that foreign investors want Indian PSLV craft to take their heavy payloads instead, and that the commercial future of India’s space project could lie in that direction.