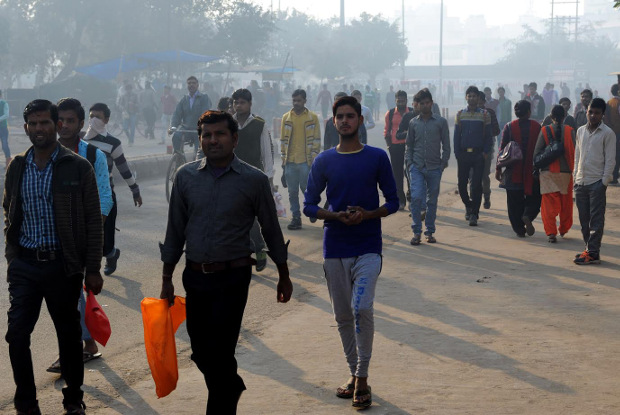 Casual workers, mostly tailors, arrive at the Noida Phase II bus stand as they begin their daily job hunt. About 80% of the 7 million workers in the textile and apparel industry are temporary, and are paid almost entirely in cash--currently in severe short supply.

Around 08.30 every morning, hundreds of workers arrive at the main bus depot in Noida Phase II, about 30 km from New Delhi. They fan out into the lanes of the neighbouring Hosiery Complex. With nothing more than a tiffin box in their hands, they begin their daily job hunt.

Almost every factory gate has a board proclaiming "Avashyakta hai (wanted)". It lists the daily requirement of jobbers--tailors, finishers, ‘pressmen’ (as those employed for ironing are called), packers and so on--needed by the 200 small, export-driven garment units in the complex. The boards have been blank since the factories were hit by the aftermath of ‘demonetisation’--as the invalidation of the Rs 500 and Rs 1,000 currency notes is being referred to. 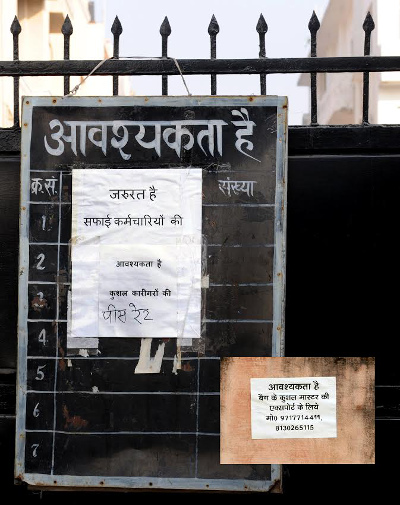 The 'avashyakta hai' (wanted) board at factory gates lists the daily requirement of jobbers at the textile and apparel units. These boards have been blank since the factories were hit by the aftermath of ‘demonetisation’.

These men and women are among the 92% of India’s workforce employed in the informal sector, which generates about half the country’s gross domestic product, according to the National Commission for Enterprises in the Unorganized Sector. Casual workers enjoy no job security or benefits of labour regulations, and about 79% of them live below the official poverty line.

With 7 million workers, the textile and apparel industry is the second-biggest employer in India--after agriculture--and about 80% of these workers are temporary. They are paid almost entirely in cash, currently in severe short supply, despite Reserve Bank of India governor Urjit Patel saying on December 7, 2016, that there was no shortage of currency nationwide.

Losing even a day’s work, at the minimum wage of Rs 350, is not an option for workers like Chanchala Devi, 35, a native of rural Nalanda in southern Bihar. Devi is a tailor, and has been trudging up and down 2 km for an hour and she has been turned away at every gate. The first shift has begun and gates have shut at 9.30 am. But she is reluctant to return home.

“I heard they are looking for workers in D block. I have four children at home and my husband who works as a checker hasn’t been paid in a month. I have to keep looking,” she said.

When the peak season turned slack

For the textile and apparel industry, November to January is peak season, a time when factories normally send out vehicles to pick seasoned workers like Devi off the street. In these three months, garment factories produce merchandise for the spring-summer lines of fashion houses in the West.

This year is different. Demonetisation has created a cash crunch that has sent the small-scale units, which form 78% of the readymade garments sector, into disarray. Nearly 80% of the workforce in this sector is employed as casual, off-rolls labour, and they are paid entirely in cash.

Workers like Devi are paid every fortnight--either as dehadi (daily wage), which is Rs 350 in Noida, or on piece-rate basis. Two cycles of fortnightly payment have gone past since November 8, 2016, and the units and workers managed to tide over the cash crunch--mostly by using old currency notes. But now, there is anxiety about where the factories are going to find the cash to pay these workers.

"I haven’t had a job since November 10, and I am missing my wage every day that I stand in a bank queue to exchange/deposit cash instead of looking for work," said Nandan (he uses only one name), a 25-year-old tailor from Umrala in Bulandshahr, western Uttar Pradesh.

No jobs as units downsize

Nandan worked in one of the most stable units in the complex. Just last week, the factory shut down two assembly lines--each ‘line’ usually employs between 25 and 45 workers.

Owners of the small-scale units say they have no choice but to downsize because the seasonal and unpredictable nature of the business and its economies do not allow for permanent staffing and formalised modes of payment to labour.

A small to mid-scale entrepreneur, who did not wish to be named, said in an average November-December, he would have at least 1,500 workers at his factory; of them 75% temporary. He has, post demonetisation, cut the numbers down to 500. 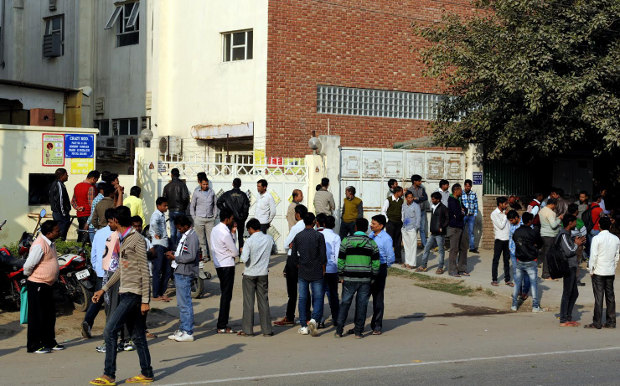 For the textile and apparel industry, November to January is peak season, a time when factories normally send out vehicles to pick seasoned workers off the street. This year is different. Workers wait at factory gates hoping for openings as shopfloors assess their daily requirement of labour. Most were turned away soon after.

"We are in wait-and-watch mode, but if the liquidity crunch remains, we will downsize even more. And others (in the field) are saying that too," he said. On the shopfloor, there are lines where sewing machines sit unmanned, huge piles of cloth waiting to be stitched.

“Productivity has taken a huge hit and if a single link in the assembly line drops, the whole process collapses,” he added.

Word of the layoffs spread quickly around the complex. Knots of anxious workers stood exchanging tips about possible openings. “Factriyan band ho rahin hain. Suna hai kala dhan pakad rahein hain. Par amir log nahin honge to haemin naukri dene wala kaun hoga? (Factories are closing. We hear that the rich are being caught with black money. But if they are put away, who will give us jobs?),” asked Javid (he uses only one name), a tailor from Motihari in north Bihar.

He has managed to hang on to his job, but has lost daily wages for four days, queuing up at banks to exchange old notes.

The hunt for seasonal jobs

Like Nandan and Javid, most workers in this complex are migrants, unskilled or partially skilled. Almost all of them come from the impoverished districts of Uttar Pradesh and Bihar, mostly men who leave their families behind. They live in the rural islands that still dot an area being swallowed by high-rise housing estates.

Nayagaon, Bhangel, Haldawani, Nangla Charandas, Yakubpur--these are the urban villages flanking the complex where they cram in small rooms, three or four workers to a room. Since the work is seasonal, they have no reason to drop anchor in the city.

Labour activists have, for a long time, been criticising the high levels of informalisation or casualisation of the workforce in the garments industry.

But small-scale employers insisted that in a seasonal industry with fluctuating demand conditions, this works ideally. “These migrant workers look for seasonal employment and return to their villages in dull months. They are not interested in permanent employment and they prefer nakad (cash),” a factory owner said. “They don’t want salaries in banks, or the headache of ESI (employees’ state insurance) or PF (provident fund) cuts.”

He added that if employers add the cost of permanent staffing to their costs, they will have to raise their prices and thus lose the competitive edge in the world market. Jobbers say they prefer the flexibility the arrangement offers, the freedom to look for the best-paying employer in the market and the scope for overtime at any given point of time.

The next month will be critical for the industry and if the cash scarcity continues, workers like Devi and Javid may have no option but to return home.