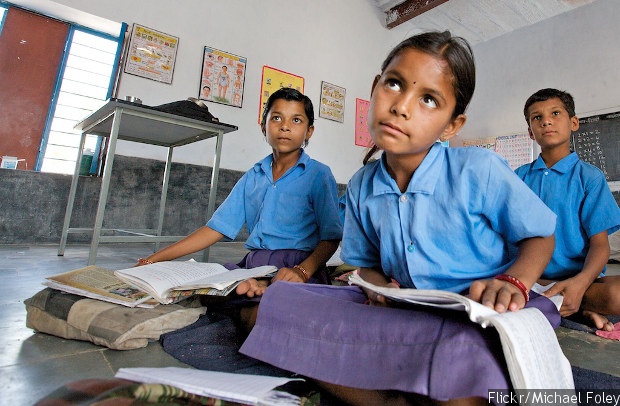 Rajasthan--a state that has India's fourth-lowest literacy rate--has signed understandings with the Tata Trusts (an Indian trust) and Khan Academy (a global nonprofit) to improve learning levels of students in government schools.

India's seventh most populated state (68.5 million people), with 24% of its population between the ages of six and 14, Rajasthan also has many children out of school (5%), according to government data.

As the first part of this series observed, literacy rates and learning outcomes are some of the lowest in the BIMARU (Bihar, Madhya Pradesh, Rajasthan and Uttar Pradesh) states. By 2020, India will have the world's largest working-age population--869 million--but an IndiaSpend analysis of these four states--with 43.6% of India's school-age population between the age of five and 14--revealed that India is unprepared to educate and train its young population.

Rajasthan's overall literacy rate improved 6.6 percentage points over 10 years to 2011, data show, against an all-India improvement of 9.2 percentage points to 74.04% from 64.8%. But these improvements hide some of India's sharpest declines in learning levels, particularly in rural government schools.

As learning levels decline, so does government school enrolment

Reading and arithmetic levels of students between standards II and V have declined across government and private schools in rural Rajasthan, according to the Annual Status of Education Report (ASER) 2014.

The percentage of children in Rajasthan in grade V, who can "read at least words" declined from 51% in 2007 to 27% in 2014 in government schools, while reading levels in private schools declined from 78% to 64% over the same period, according to ASER data. 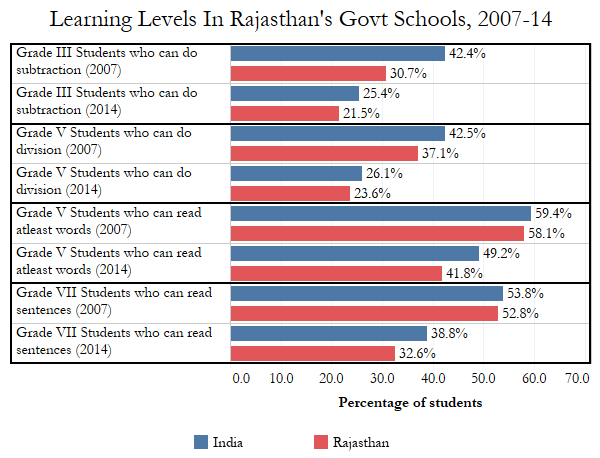 The average attendance in grade I in public and private schools was 65.9% based on classroom attendance registers seen by ASER volunteers, according to an ASER study from 2010. Regular teacher attendance was 72.55%, calculated based on the two days the ASER team visited schools.

A drop in learning levels could indicate that little has changed between 2010 and 2014, when ASER conducted its most recent survey. (The ASER 2016 survey results are set to be released on January 18, 2016.)

At the same time, well-designed interventions can boost learning, with an innovative teaching system in six Rajasthan districts recording average score increases–irrespective of gender and social background–of 45% in Hindi, 26% in English and 44% in math, as IndiaSpend reported in October 2016.

India's highest proportion of women without schooling , many out-of-school children

In 2013-14, at the elementary level, there were 5% out-of-school children in Rajasthan, according to the 2015 Digital Gender Atlas for Advancing Girls' Education: 18% of those were children who have never been to school, while 37% were dropouts. More girls (7%) than boys (3%) were out of school.

Parents' education impacts school education, according to this 2001 paper published in the Review of Development Economics, with higher parental education improving school enrolment. Rajasthan recorded the highest percentage of mothers across Indian states (69.7%) with no schooling, according to ASER 2014.

Besides parents' education, another factor that could affect attendance and retention at government schools is a well-functioning mid-day meal programme. Continued exposure to mid-day meals contributed to an increase in test scores, according to this 2016 study. Reading scores improved by 18% for children exposed for five years to mid-day meals, in comparison to children who had been exposed to mid-day meals for less than a year. The arithmetic test scores witnessed an improvement of 9%.