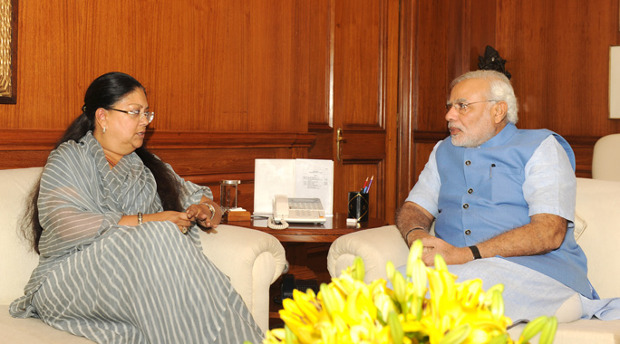 The Bharatiya Janata Party (BJP)-led government in Rajasthan—like its counterparts in Tamil Nadu, Delhi and Jammu & Kashmir—is preparing for a slowdown in fund flows from the central government.

While presenting the budget in the assembly recently, Rajasthan Chief Minister Vasundhara Raje said the effect of a central government decision to cut or end funding for many social-sector programmes would be felt.

That, however, is not stopping one of India’s most socially backward states from increasing spending to boost the economy and make people healthier, wealthier and better educated.

This is what outlays look like in some core sectors:

Higher outlays may not mean the money will actually be spent, if past, lethargic spending patterns are any indication. Here’s a look:

And so, on to a surplus budget

Scindia also said that capital expenditure has been increased 40% in 2014-15 from 2013-14, and debt has been utilised to create assets.

Total tax revenue (state’s own tax revenue including land revenue and state excise and share of central taxes like income tax and service tax) is expected to increase 27% to Rs 76,020 crore, from Rs 59,604 crore.

Grants-in-aid from the central government—to cover revenue deficit, disaster relief and sector-specific schemes —are expected to decline 16% to Rs 19,844 crore from Rs 23,595 crore.

Expenditure on social services is likely to increase 15% from Rs 40,634 crore to Rs 46,622 crore. Given Rajasthan’s low social-sector indices, such spending is expected.

Infant mortality rate, an estimate of infant deaths for every 1,000 live births, is 47 as against the national average of 40.

Maternal mortality ratio, the number of women aged 15-49 dying due to maternal causes per 100,000 live births, is 224 in Rajasthan as against the national average of 167.