‘Railways Went Ahead With A Failed Bio-Toilet Model’

For 24 years, the Indian Railways have tried to find a solution to the 3,980 tonnes--497 truck-loads (at 8 tonnes per truck)--of excreta ejected from trains on to tracks every day. The latest effort was the installation of what are called “bio digesters” beneath train toilet seats where bacteria in a compost chamber digest excreta.

But the bio-toilets are no better than “septic tanks” and the water they led out no better than “raw sewage”, IndiaSpend reported on November 23, 2017, citing a study by the Indian Institute of Technology (IIT) Madras. The government’s auditor, the Comptroller and Auditor General, also pointed to many flaws in these toilets, as IndiaSpend reported on January 6, 2018.

The IIT Madras study was not the first time the bio-toilets in Indian trains, fitted for Rs 1,305 crore, were criticised. A 2007 study, jointly conducted by the Lucknow-based Research Designs and Standards Organisation (RDSO) and IIT Kanpur, also concluded that excreta wasn’t being treated in the bio-digesters. The railways has not made this report public.

IIT professor Vinod Tare, 61, who headed this study, is currently a professor of environmental engineering at IIT Kanpur. Between 2004 and 2006, he was the project investigator for the Indian Railways scheme to develop “environment friendly toilets”.

Tare’s area of interest is natural resource conservation and regeneration. He currently heads the government think tank, Centre for Ganga River Basin Management and Studies (C-Ganga), and advises the Namami Gange, the government’s flagship programme for the conservation of the Ganga. 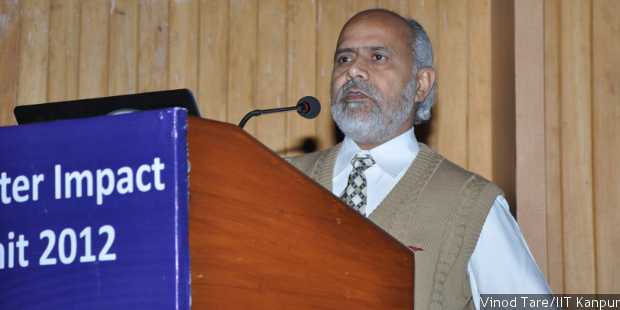 Vinod Tare, 61, who headed the study on bio digesters, is currently a professor of environmental engineering at IIT Kanpur. Between 2004 and 2006, he was the project investigator for the Indian Railways scheme to develop “environment friendly toilets”.

In this interview, Tare explained the problems of waste management in Indian trains and the reasons why it fails.

After 24 years of experimentation, the Indian scientific community has been unable to develop a workable model on rail bio-toilets. Now there are new plans to fit vacuum toilets atop the bio-toilets. In the meanwhile, costs have spiraled. How do you analyse the situation?

Challenges in the Indian context are many. For one, Indians are in the habit of “wet cleaning” (in toilets) unlike the “dry cleaning” practices in Western countries. Therefore, the volume of waste in Indian trains is substantially more. Also, train coaches in India--with an average of 72 berths--carry a bigger load and passengers are taken to longer distances, as compared to the rest of the world. Temperature variations in Indian trains vary from a high of 45°C (degrees Celcius) to as low as 4°C.

This having been said, there is little doubt that the approach of the Indian rail establishment has been extremely awkward. An experts committee headed by me had--in 2007--concluded that bio-toilets developed by the Defence Research and Development Organisation (DRDO) were not workable. Yet, the Indian Railways went ahead with the decision to proliferate this model. These toilets failed in the 2013 Kumbh Mela (the periodic congregation of Hindus on the banks of the Ganga to mark a solar eclipse) at Allahabad.

Later, the army people told me at a seminar that the toilets installed at the Siachen glacier were non-functional. All kinds of issues are now emerging with the rail bio-toilets, which are no better than septic tanks. IIT Madras, in a recent study, has come up with similar findings. Problems are unlikely to get solved by fitting vacuum toilets atop the bio-toilets. Evacuation systems will still be needed to be installed at yards.

Technological solutions exist, but the intention to find a lasting solution is not there. Different sets of bureaucrats have only been interested in fulfilling targets and in ensuring that their tenures get completed in a trouble-free manner. This is the reason that the scheme is in such a mess.

In response to the IndiaSpend article, the Indian Railways have claimed that the rail bio-toilets were different from and probably more efficient than the DRDO stationary toilets. Can you explain?

This cannot be. Indeed, the situation is quite the contrary. The retention time of faecal matter in a train toilet is much less, as compared to stationary toilets. The bio-degradation process is required to get completed while the train is in motion and travelling across different climatic zones. This is a big challenge.

In any case, there is no difference in design or technology of a stationary or a train toilet. See, this is the problem. Instead of working towards lasting solutions, the establishment has continued to justify its actions.

What exactly are the problems with the DRDO’s toilets?

These toilets are no better than holding tanks. Very little biological treatment is happening. Claims that human excreta is broken up into gases (methane) and liquid by using a compound of bacterium obtained from Antarctica are not based on scientific data.

Substantial spending has--and continues to be done--on installation of bio-toilets. But, my view is that on-board treatment of human excreta is difficult. Evacuation facilities and treatment plants--for compost or biogas--can be set up in the rail yards. As head of the bio-toilet committee of the Technology Mission of Railway Safety, I had suggested this in 2009. I also discussed the idea at a meeting with then railways minister Suresh Prabhu in 2015.

Series concluded. You can read the first part here and our November 2017 report on railway bio-toilets here.