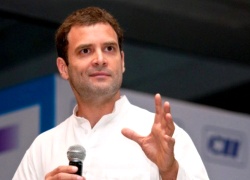 Congress Vice-President Rahul Gandhi’s speech last Thursday in Delhi to the Confederation of Indian Industry (CII) received mixed reviews – largely down party lines. But one thing almost all agreed upon – it was more of a personal, political speech than a policy framework targeted at India Inc.

So, what did Rahul Gandhi actually say? A quanitative analysis of his speech word for word shows that it was, in fact, a much more personal and political than a speech to the business community on the state of the economy – an economy controlled by his political party. 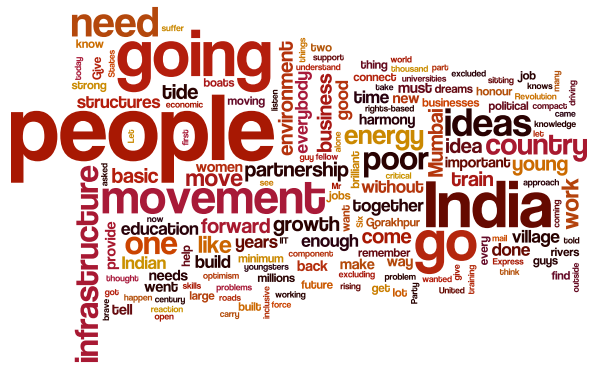 The graphic above illustrates the key words of his speech – the bigger the word, the more Gandhi said it. Gandhi’s top 4 words? He said “People” and “Go” 31 times each, “India” 26 times and “Going” 22 times.

What was the most frequent word that is probably the most relevant to a CII or industry gathering? “Infrastructure” – Gandhi said it 11 times. What about other words that one might expect in front of industry audience? He said “Business/Businesses” (14 times), “GDP” (0 times), Jobs (4 times), Budget (0 times), and Economy/Economic (3 times).

And the most interesting and surprising word that he said frequently? “Movement” – he said it 16 times with the first time in this sentence: “India is home to the largest pool of human capital the world has ever known and probably, will ever know. And it is this movement of people, this tremendous movement of people and ideas that is going to define this country in the Twenty First century.”

The use of the word “movement”, combined with his other frequent words such as “people”, “India”, and “go/going” would suggest a forward-looking, people-centered action agenda for India. However, an analysis of the speech word by word also shows there were not much details or policy ideas to go with it.