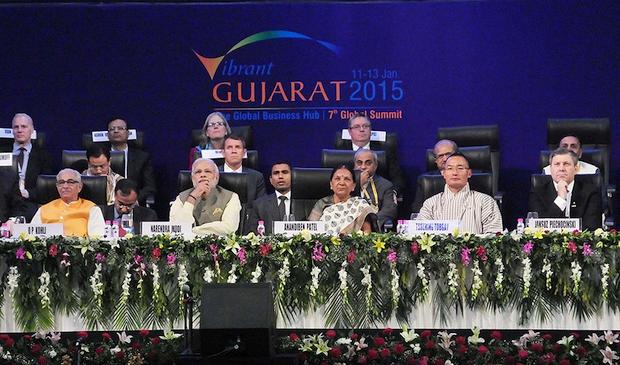 On the face of it, signing 21,000 MoUs (imagine the paperwork) and capturing Rs. 25,00,0000 crore ($415 billion) of investment intentions is a big deal. The bigger the numbers, the bigger the sense of achievement. The larger question is: does it matter? And more importantly, does it really help?

The answer to both is perhaps yes.

But before we delve into the argument, let’s look at some figures. For instance, a state like Maharashtra achieves almost as much as Gujarat with seemingly less effort (see chart below).

If total capital invested is one indicator of how much money is actually going on ground, last available numbers show Maharashtra had more investment than Gujarat in 2012-13. Although Gujarat was slightly ahead in the year before. These numbers may go up and down depending on investment cycles and lags but note that Maharashtra has never really held high-decibel investment summits.

It might be a greater surprise to note that Tamil Nadu which makes even lesser noise and has seen one chief minister in jail on charges of graft has a higher gross GDP at Rs. 447,944 crore, versus Gujarat’s Rs. 427,219 crore versus, hold your breath, Maharashtra’s Rs. 825,832 crore. All figures for 2012-13. So Maharashtra = Gujarat + Tamil Nadu, at least roughly. But to be fair, none of this is exactly breaking news.

States have to fight for investment. So Gujarat deserves credit for trying hard. And so does West Bengal, sceptical as many of us are. And as states fight for more investment and embark on massive campaigns, they improve the case for investing in India, which itself is under marketed. Incredible India it might be but attracting investment actually calls for a credible story, in a manner of speaking.

Speaking of West Bengal, it too concluded a grand summit recently and announced investment intentions worth Rs 2.43 lakh crore. This is roughly a tenth of Gujarat but optimistic, to say the least. Particularly for a state which has been largely considered to be un-investworthy for about four decades.

Bengal-like responses could however set of a race to outdo each other in announcing summits and then proclaiming the number of MoU’s signed or investments garnered. Obviously, the numbers don’t add up eventually. And you don’t even need to fish out a calculator to do that. So the real problem of investment growth and potential job creation does not really get fixed. Worse, the whole exercise invites more scepticism with each passing year, as Gujarat is facing now.

The problem is larger. The focus on attracting big ticket investment is good. Big names mean large investments mean lots of primary and secondary job creation, even they take time to materialise. Possibly the cumulative media noise also helps tell the citizenry that the Government of the state is at work to improve their lot. There is a separate question of how many manufacturing jobs can really be created but that is another story.

But big investors will mostly come whether or not there is a jamboree. Particularly if the region in question has a reigning competitive advantage in both hard and soft infrastructure areas. And states like Maharashtra, Gujarat & Tamil Nadu do, among others. This is not to say that investors don’t need wooing. They do but arguably the best deals are struck behind closed doors.

But going mostly after large investors is lazy. It means inviting folks who know how to navigate a difficult business environment, which India is notorious for. A Reliance announcing Rs. 100,000 crore of fresh investment (even if it isn’t) is good for reasons stated earlier but there is little Reliance needs by way of assistance to seed and grow if they are indeed committed to doing so. Except perhaps fiscal incentives.

Going after large businesses also in some ways disincentivises the effort required to fix ground level problems. After all, it is simpler to have a bunch of senior bureaucrats doing single window clearances for the big daddies than figure out why entrepreneurs have to struggle just to get clearances to start a company or lease space for a new office.

Entrepreneurs and small businesses are the flavour of the season. One approach is to create more incubators or incubator-like environments. Indeed, Gujarat has taken steps in this direction. The Centre for Innovation, Incubation & Entrepeneurship, IIM Ahmedabad, has spearheaded some of these, like the DA-IICT Centre for Entrepreurship & Education. Other states would have similar initiatives too.

But the real, the most painful challenge will be that of creating an overall ease of doing business environment. A lot of this is at the local and civic level. Another painful reminder; India stands at 142 out of 189 ranked by the World Bank for ease of doing business. This is the toughest to tackle but will have the best, long term impact for young India. The 'vibrancy’ of investment summits must extend to those who don’t and can’t attend them.

(Govindraj Ethiraj is the founder of Indiaspend.org. This story originally appeared on boomlive.in. With inputs from Abheet Singh Sethi of indiaspend.org)