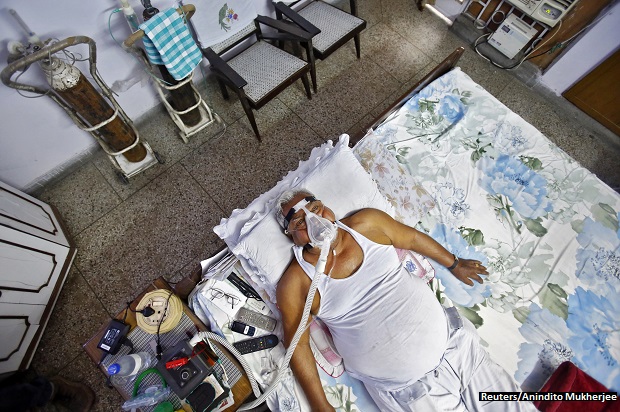 People in the United Kingdom (UK) get the best end-of-life care, according to the index, calculated by the Economist Intelligence Unit.

India, however, improved its position from the 2010 index, where it stood at the bottom of a 40-country list.

Palliative care is an approach that improves the quality of life of patients and their families facing problems associated with life-threatening illness, according to the World Health Organisation (WHO).

The southern state of Kerala is the only feather in India’s cap. With only 3% of India’s population, the state provides two-thirds of India’s palliative care services, according to the 2010 Quality of Death Index.

Rich nations tend to rank higher, the report reveals, and the UK’s success is attributed to effective national policies, a strong hospice movement and extensive integration of palliative care into the National Health Service.

The top 10 countries are all high-income nations, indicating a strong link between income and palliative care services. Nearly 20 million people across the world require end-of-life palliative care every year, 6% of those are children.

India is ranked 51st in the palliative and healthcare environment, while it ranked 67th in availability of human resource for palliative care. India stands at the 74th position in affordability of care.

Opioid pain killers are freely available and accessible in only 33 of the 80 countries. Access to opioids is hampered in many countries by red tape, legal restrictions, lack of training and awareness and social stigma.

In India, nearly a million people with cancer and an unknown number of people with other incurable and disabling diseases require opioids for pain relief. Morphine is the only oral opioid available for pain management.

Access to opioids is not easy in India because of strict regulatory laws--including imprisonment for minor clerical errors in pharmacies--under the Narcotic Drugs and Psychotrpic Substances Act, 1985.

A 2014 amendment to the Act has made access to opioids easier.

If a person in pain needs an average of 100 mg of oral morphine a day, the annual quantity required would be 36,500 kg for one million people in pain from cancer alone.

The average annual quantity of morphine sold in India between 2000 and 2004 by government factories was 142.32 kg, 0.4% of the estimated requirement.

The only way to measure morphine consumption is by measuring the quantity of morphine salts sold from the government’s opium and alkaloid factories. This is because the government has stopped reporting consumption statistics for morphine, according to this report.

The Kerala model is working

India performs relatively better with a ranking of 45 in community engagement.

The Neighbourhood Network in Palliative Care, a community-owned programme in Kerala, is a project that evolved out of a series of need-based experiments in the community.

Kerala had more than 170 institutions that stocked and dispensed oral morphine at the end of 2014.

The 2015 Quality of Death Index report also mentions initiatives taken by the state of Maharashtra to include children’s palliative care in policy and setting aside money for care.

Maharashtra University of Health Sciences, Nashik announced last year that palliative care will be included as a part of the curriculum for paediatricians.