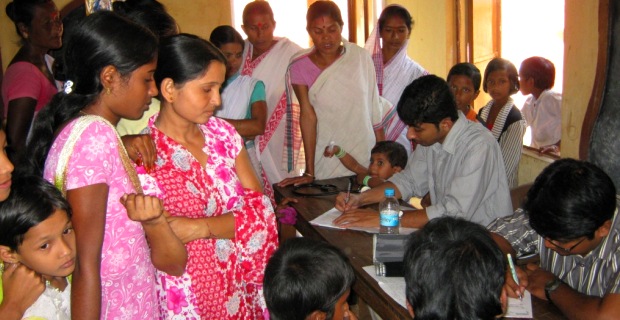 * Gujarat has among the lowest doctor density ratio (1.5) in rural areas as against the national average of 2.4 doctors

* India’s public health system has a shortfall of over 12,000 specialist doctors and over 100,000 health workers

India’s healthcare system is often criticised for its inadequate coverage. Concerns are raised about low public expenditure, doctor absenteeism, scams in the Government-run National Health Mission (NHM)and insufficient infrastructure. As a whole, these challenges explain the poor health indicators of the country.

Vacancies in the healthcare sector remain the starkest concern among policy makers and those in need of treatment. This affects both overall doctor density, particularly in rural areas, as well as the availability of specialist doctors.

On the other hand, India’s public health system has a shortfall of over 12,000 specialist doctors and over 100,000 health workers. IndiaSpend had earlier reported how rural India is 60% short of the ideal number of doctors. 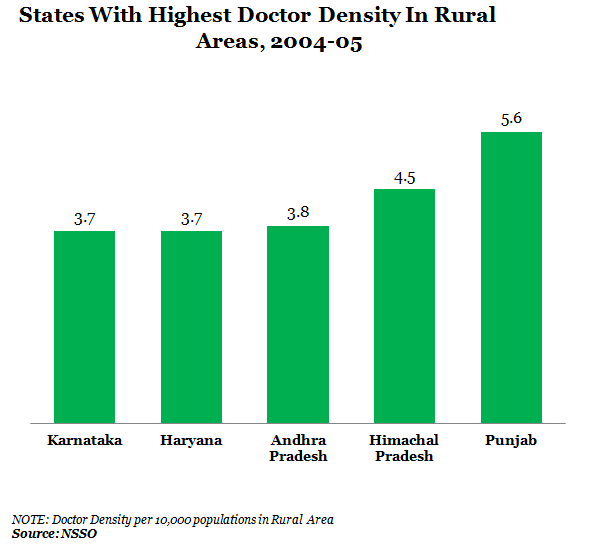 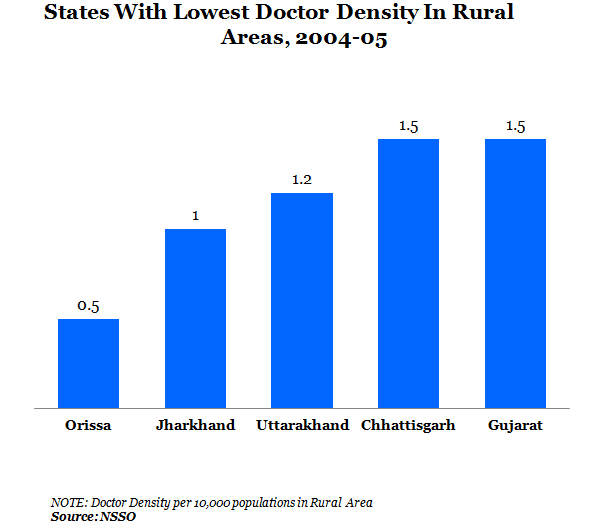 Data shows that states like Tamil Nadu have the highest shortfall of 1,540 specialists in Community Health Centres (CHCs) while the requirement is also 1,540 (presently, specialists are attending cases on a hiredbasis). Tamil Nadu also has the highest shortfall of health workers (accredited social health activists, anganwadi workers, auxiliarynurses and mid-wives) of 7,626, of the total requirement of 18,616.

Gujarat has 1,144 specialist shortfalls in CHCs, 345 doctor vacancies in primary health centres and 4,366 vacancies in health workers and nursing staff. 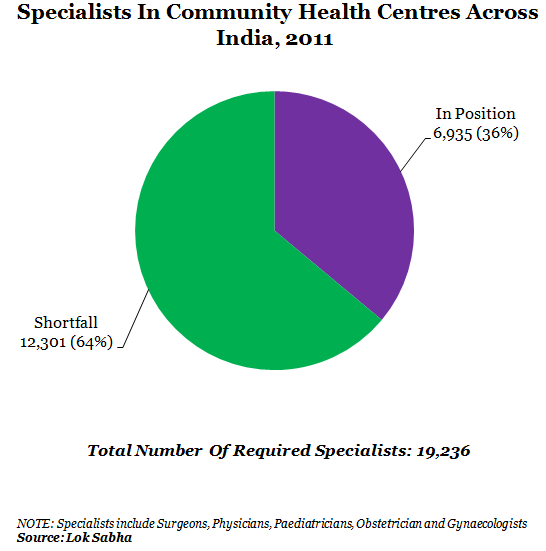 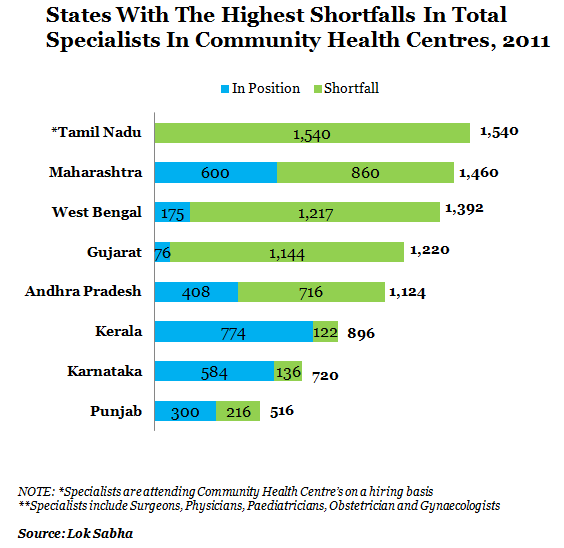 Tamil Nadu, West Bengal and Gujarat lead the states ranking with high shortfalls of more than 1,000 while Kerala and Karnataka have the least shortfalls of less than 150. 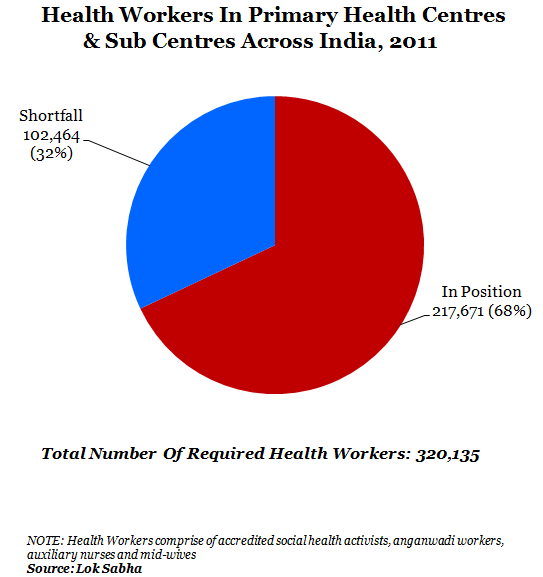 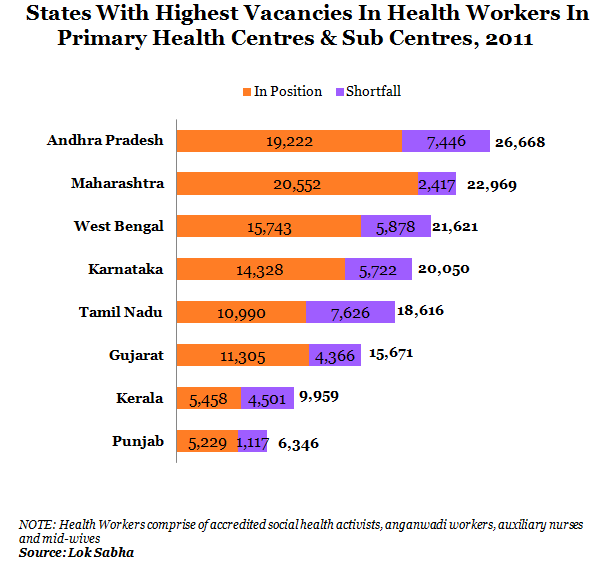 Incidentally, out of all these states, only Gujarat (345) and Karnataka (221) have doctor vacancies in PHCs while all other states have excess allopathic doctors. The norm is one doctor per PHC.

Similarly, only Gujarat (553) and Kerala (363) have vacancies for nursing staff in CHCs and PHCs. All the other states accounted for in this article have no vacancies. The norm is 1 nursing staff per PHC and 7 per CHC.

Let us now see the total number of doctors registered with the medical councils in these states: 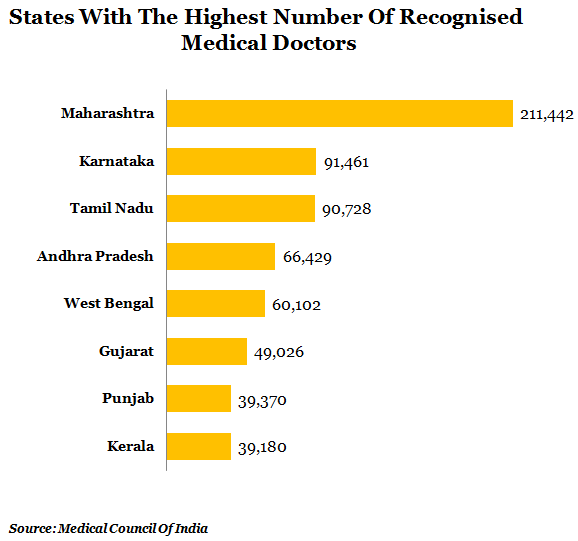 We can also see that while Tamil Nadu has a high number of registered doctors and better doctor density compared to other states, it still has high vacancies of specialists for CHCs.

One of the biggest challenges of India’s healthcare system is personnel management. In a reply to the Lok Sabha recently, the Health Minister said that steps like increasing intake of medical students to increasing the number of medical colleges have been taken to address the issue. However, the number of vacancies suggests the journey will be a long one.